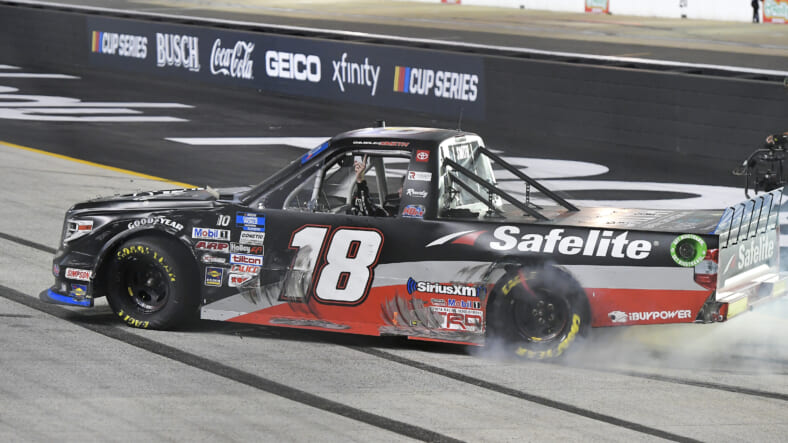 BRISTOL, Tenn. — Sheldon Creed led 189 of 200 laps in Thursday’s UNOH 200 at Bristol Motor Speedway, but it wouldn’t matter. Contact with Chandler Smith and John Hunter Nemechek on the final restart resulted in a flat tire and a 19th place finish, handing the win for Kyle Busch Motorsports teammates to battle out.

Smith put a move on Nemechek to push him up the track and out of the racing groove. He got past Nemechek and pulled away in the final three laps to secure his first NASCAR Camping World Truck Series victory. 19-year-old Smith sat far enough behind the playoff cutline before the final restart where only a victory would advance him to the Round of 8.

“I’ve really been tested here in the last year or two,” Smith said, holding back tears. “The competition has gotten a lot harder. I had to go to work, do a lot more, more studying — it finally paid off”.

Creed won at WWT Raceway and Darlington Raceway to kick off the Round of 10, so his playoff odds didn’t suffer from the outcome of Thursday’s race.

“He kind of just washed up into me,” Creed said of Smith. “I don’t know if you’re going to get away with that in the next round. I’m not really worried about him, [but] the 4 knows who’s fast and who’s here to race for this [championship]”.

Nemechek, the driver of the No. 4, finished in third place after a relatively quiet first two stages. A win would’ve given him his first victory since winning the CRC Brakleen 150 at Pocono. The strong finish follows up a second-place run two weeks ago at Darlington. He’ll transfer to the Round of 8 as the points leader with Creed 24 points behind him in second.

Stewart Friesen advanced to the Round of 8 behind three top-4 finishes in the first round. Zane Smith, Ben Rhodes, Matt Crafton, and Carson Hocevar fill the remaining four remaining spots in the playoffs.

The eight drivers needed to survive a demolition derby headlined by 11 cautions for 85 laps. One driver who couldn’t do so was Austin Hill after concluding the regular season by winning back-to-back races at Knoxville and Watkins Glen. He and Hailie Deegan caught up in a hard crash with 10 laps to go.

“I hate that we tore up all those other race trucks,” Hill said. “It’s all on me. I let the team down. They brought me a hot rod here to Bristol. This is a place that we aren’t very good at, and we were good tonight”.

Hill, along with Todd Gilliland, did not transfer to the Round of 8.