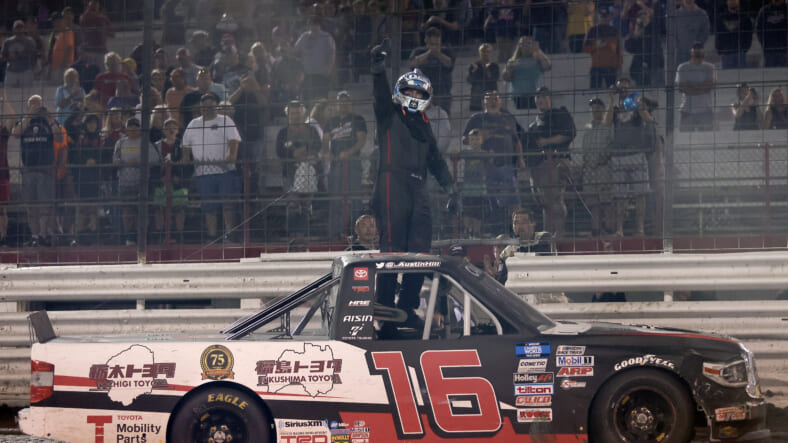 Leading 36 of 61 completed laps, Austin Hill was out front as the caution came out and stayed out for lightning, winning the United Rentals 176 in the NASCAR Camping World Truck Series at Watkins Glen.

“Once you got five laps into the race, everyone was kind of equal,” Hill said. “[Drivers] kind of figured out where there truck was, [drivers] figured out where their limits were. [Running ARCA on Friday] paid off a little bit knowing that tire wear was going to be a factor and that tires were going to fall off a little bit. I tried to be mindful of that, but at the same time, once we played that pit strategy and we got to the lead, I wanted to keep the clean air”.

Hill pit with three laps to go in each of the first two stages to keep track position beginning the second and third stages, respectively. All lead lap drivers pit with three laps to go in stage two, meaning Hill cycled to the lead for a stage two victory. Hill maintained a strong lead in the early part of stage three as rain cells popped up on the radar. NASCAR was forced to throw a caution for lightning on lap 61 of 72, and the race never resumed.

“Right when we were going green for that last restart, my Crew Chief Scott [Zipadelli] came on the radio and said [that] there’s weather in the area, [and we] don’t know how long it’s going to last,” Hill said. “[You’ve] got to save your stuff, but at the same time, go. Don’t hold back, don’t let guys get around you”.

While Hill won the second stage and the race, Todd Gilliland won stage won and took 46 points on the day.

Finishing second in the race was John Hunter Nemechek, the regular-season points champion.

“We had a really fast Mobil 1 Toyota Tundra today,” Nemechek said. “Austin [Hill] had the dominant truck all day. We were better in certain spots and he was better in other spots on the racetrack. Who knows what could have happened. He could’ve made a mistake, I could’ve made a mistake. It’s part of racing. I felt like if he would’ve slipped a little bit or if I got side-by-side with him, I feel like we could’ve probably made the pass”.

Nemechek was able to bounce back from an incident with Ben Rhodes on lap one, turn one to secure his 10th consecutive top-15 finish. Nemechek wheel-hopped into the heavy braking zone and took out Rhodes, who was directly in front of him.

“Everybody is usually a little bit smarter getting into [turn] one, but it didn’t seem like that in the rearview mirror,” Matt Crafton, the 23rd place finisher said. “Daytona is where everybody was really nervous and had zero experience, that was a lot more give and take”.

Saturday’s race had just two cautions for incidents despite many spins and minor accidents. Chad Chastain wheel-hopped and hit the tire barrier in turn one on lap nine, and Derek Kraus crashed on the backstretch on lap 55.