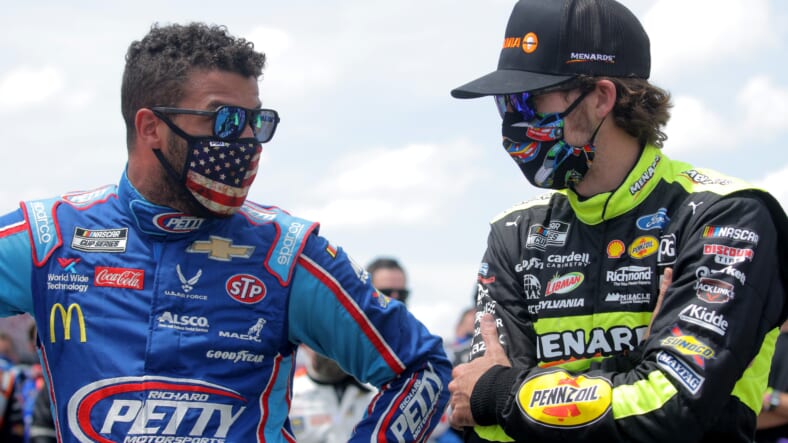 TALLADEGA, ALABAMA - JUNE 22: Bubba Wallace, driver of the #43 Victory Junction Chevrolet, and Ryan Blaney, driver of the #12 Menards/Sylvania Ford, talk prior to the NASCAR Cup Series GEICO 500 at Talladega Superspeedway on June 22, 2020 in Talladega, Alabama. A noose was found in the garage stall of NASCAR driver Bubba Wallace at Talladega Superspeedway a week after the organization banned the Confederate flag at its facilities. (Photo by Chris Graythen/Getty Images)

With what NASCAR refers to as its â€œsilly seasonâ€ rapidly approaching, itâ€™s time to make predictions on where the top drivers in the sport will be running in 2021. These are just some of my initial big predictions/thoughts, but things will change rapidly once the 48 machineâ€™s new driver is announced.

Letâ€™s start this one out with a bang; everyone wants to know who will replace Jimmie Johnson? Erik Jones, Kyle Larson, Tyler Reddick, and Corey Lajoie were all viewed as contenders for this ride, but one guy stood out above the rest, Bubba Wallace. In no way is Bubba more talented than any of those four drivers. He is more marketable, though, and he is currently one of the biggest stars in the sport with his social justice stances. Bubba would bring an influx of sponsorship and notoriety with him to Hendrick, and it would make sense to add him. Though, I think Alex Bowman takes the prestigious 48 because of his success and fit within Hendrick Motorsports, and Bubba takes the ride known for one of the most marketable drivers in the history of the sport.

Jones has a chance to lock this ride down rather quickly. Jones has been an inconsistent driver at the top level, but when he is on, he is very competitive. As a former winner and consistent playoff fixture, he fits the bill of what the team looks for in its drivers. Jones could easily be the guy to lock down the 48, but more than likely, he goes to a spot where he can stay competitive and partner up with a legend, Kurt Busch.

Briscoeâ€™s scenario is a tough one. I could see him sticking in Xfinity for another year, but, letâ€™s be honest, he is ready for the cup. Briscoe has been a force to be reckoned with all season and is ready for top-level competition. His racing style is eerily similar to that of Tony Stewart, and that would be poetic for him to pilot his old number. If Briscoe doesnâ€™t land here, watch out for Kyle Larson.

This ride is similar to the Hendrick scenario. Marketability wins, and thatâ€™s evident with Lajoie. Lajoie is a rising star who deserves a shot with better machinery. RPM isnâ€™t a top tier team, but Lajoie could open some eyes and get to learn from the King, so it would be a no brainer for him. As for RPM, Daniel Suarez could be the guy here if Lajoie doesnâ€™t get it.

This one is something I see truly brewing. Bowyer got to do some more commentary work progressively over the past few seasons. He has been phenomenal. The knowledge he has, combined with the comedic timing he holds, makes him a tour de force in the booth. He and Gordon have great chemistry, and he could slot in with Mike Joy and him to form an entertaining booth for the long term future.

This one is a little strange. Larson seems like a way too talented driver for this ride on the surface, but if you dive into it, it makes sense. With Aric Almirola needing another big year next year to keep the ten car, and potentially openings emerging next year, Larson could take his shot to get back in the sport at a lower-tier team for a year. Go Fas Racing is a partner of Stewart Haas, and maybe this is how Larson can quietly reacclimatize to the sport without controversy and be groomed for a ride at SHR.