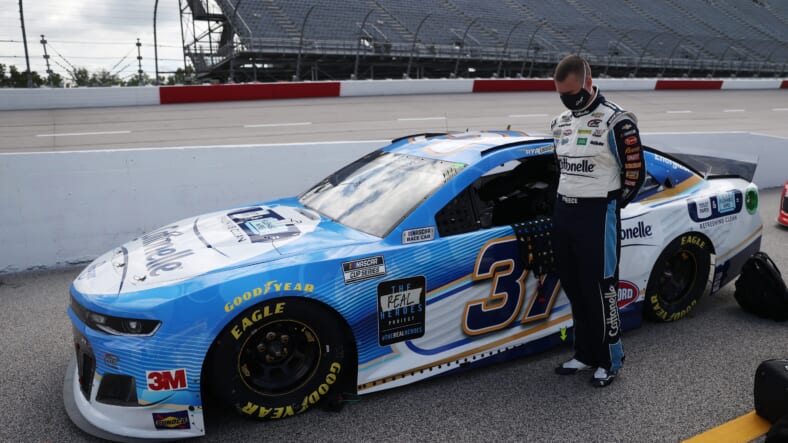 DARLINGTON, SOUTH CAROLINA - MAY 17: Ryan Preece, driver of the #37 Cottonelle Chevrolet, prepares to drive during the NASCAR Cup Series The Real Heroes 400 at Darlington Raceway on May 17, 2020 in Darlington, South Carolina. (Photo by Chris Graythen/Getty Images)

Ryan Preece’s NASCAR career has defined by hard knocks, but the Connecticut native is looking to make the most of a rare opportunity.

In Sunday’s exciting return to NASCAR action, The Real Heroes 400 at Darlington Raceway provided late-race drama that a sports-starved nation has salivated over while live events are put on hold.Â With three circuits to go in the 293-lap event, a dramatic pass was made to secure first-place. The beneficiary then held off a furious challenge over the remaining turns to secure the victory.

Now, this battle did not take place at the front of the pack. Kevin Harvick’s healthy two-second interval was more than enough to hold off Alex Bowman for the win.

But so crazy are our modern times that a battle for 20th in one race wound up determining the leader in the next.

Preece’s pass of Bubba Wallace on lap 291 secured him the pole position, meaning he will lead the field at the start of Wednesday night’s Toyota 500 (6 p.m. ET, FS1). The resulting front row starting spot is part of NASCAR’s efforts to feasibly return during the ongoing health crisis, which eliminates qualifying and practice sessions. The first 20 positions were determined by inverting the top finishers from Sunday’s return event, The Real Heroes 400. It was the premier NASCAR Cup Series’ first competition since shutting down due to the COVID-19 pandemic nearly two months prior. The remaining 19 positions were determined purely by finishing order, relegating Wallace to starting 21st.

The 29-year-old native of Berlin, Connecticut told Terrin Waack of NASCAR.com that he knew what was at stake with that fateful pass.

“I knew we were in 21st in the last 10 laps,â€ he said. â€œWe had a really good car to begin with, so it created the opportunity to get back by Bubba (Wallace). But thatâ€™s why I was really pushing the issue to get by him because that was the difference of 20 spots, right? Itâ€™s going to make you push that much harder.â€

It’s a bit of an unusual position for Preece, the driver of the No. 37 Chevrolet for JTG Daugherty Racing. The team is perhaps NASCAR’s equivalent of, say, the Memphis Grizzlies…a relatively low-budget team that occasionally musters a name or a win on its docket, but never truly a threat for a championship. One of the team’s owners is former top overall NBA draft pick Brad Daugherty and the spoils of five NASCAR national series victories reside in their trophy case (one at the premier Cup Series level when AJ Allmendinger won the 2014 Watkins Glen race).Â JTG’s most recent prestigious days came last season when Chris Buescher mustered 16 consecutive finishes in the top 20. Buescher would play that success into a more prestigious ride, taking over the No. 17 Ford at Roush Fenway Racing.

This is Preece’s second year of both full-time Cup racing and with JTG Daugherty, albeit his first under No. 37 branding. He ran his rookie campaign in the team’s No. 47, whose 2020 duties went to Roush castaway Ricky Stenhouse Jr. He has paid his dues at NASCAR’s lower levels, first making a name for himself on the prototype Whelen Modified Tour with a 2013 championship before earning a pair of national Xfinity Series wins with Joe Gibbs units. Preece was able to provide the team with some much-needed good news during the coronavirus pause by building momentum on NASCAR’s simulated iRacing Pro Invitational Series. The virtual No. 37 earned four top ten finishes over the seven-race exhibition slate held on the iRacing platform. That included a runner-up spot at the Texas Motor Speedway recreation, where Preece fell just short (0.050 seconds) of beating out Timmy Hill for the win.

With the middling budget provided at JTG Daugherty, Preece has done what he can with what he has. His debut with the team, for example, was an eighth-place finish at the 2019 Daytona 500. Since then, however, bad luck has drafted with the team and has refused to back off.

A good follow-up of Atlanta after the opening was ruined by a pit road incident with BJ McLeod. Last October’s Talladega race saw him involved in three big wrecks alone. He was battling Denny Hamlin for the win at the most recent Daytona 500, but a fiery wreck that ate up multiple cars ended his chances with two laps to go.

Preece knows there’s an opportunity to be had on Wednesday night. Part of his Cup Series woes could stem from poor starting position. His best start to date was a 14th-place posting the Charlotte Roval race last fall (he brought the car home 21st that afternoon).

â€œTrack position…is so hard to get,â€ Preece said. â€œSo if you have a good race car and you already have that track position, then itâ€™s just about everybody executing the way they need to. Staying up front and keeping that clean air right in the front half, front third of the pack, itâ€™s a big deal. That can pretty much set the tone for your race.â€

Tough finishes in the early going have created a lot of ground for Preece to make up if he wants to get a JTG Daughtery machine back into the NASCAR playoffs. Their last, and only such endeavor came in the aforementioned 2014 when Allmendinger was able to get to the postseason with the Watkins Glen win as his ticket (the No. 47 finished 13th in the standings that season). Preece is currently 61 points out of the final playoff seed.

Keeping the position won’t be easy. Starting immediately behind Preece in Wednesday’s 228-lap event will be the elite Fords of Joey Logano and Clint Bowyer. 19th-place finisher and Preece’s front row companion Ty Dillion will be equally hungry for track position as he is in a similar budget crunch with Germain Racing’s No. 13 Chevrolet.

â€œWe know we have a fast race car,â€ Preece said Waack. â€œItâ€™s a bittersweet type of thing because I really felt like we had a much better car than 20th last week. Just circumstances out of your control really is what it is. But at the same time, it gives us an opportunity to rebound on that and have a solid day. Start us off on the right foot when it comes to it on Wednesday.â€

For the full starting lineup for Wednesday’s race, click here