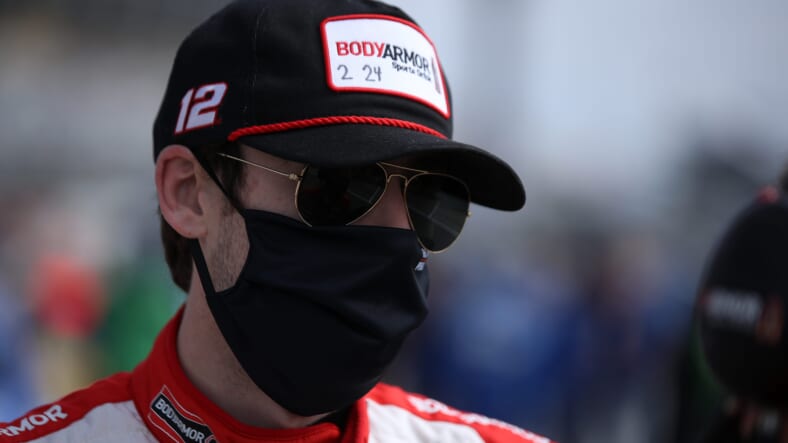 HAMPTON, GEORGIA - MARCH 21: Ryan Blaney, driver of the #12 BodyArmor Ford, waits on the grid prior to the NASCAR Cup Series Folds of Honor QuikTrip 500 at Atlanta Motor Speedway on March 21, 2021 in Hampton, Georgia. (Photo by Sean Gardner/Getty Images)

Kyle Larson’s dominance was of no concern to Ryan Blaney, who became the sixth different NASCAR Cup Series winner this season.

Kyle Larson led 269 of 325 laps on Sunday afternoon at Atlanta Motor Speedway’s NASCAR Cup Series event. Alas for Larson and his No. 5 Hendrick Motorsports Chevrolet, the final circuit was not one of them.

Ryan Blaney passed Larson with nine to go, earning a victory in the Folds of Honor QuikTrip 500. Blaney, driver of the No. 12 Team Penske Ford, becomes the sixth different winner in six events this season. Larson finished second ahead of Alex Bowman, Denny Hamlin, and Kyle Busch.

“I’m glad I’m one of them!” a smiling Blaney said about joining the other five winners in relative playoff safety. As for the parity, Blaney added “It just goes in the off-season of prep work, how youâ€™re going to unload, show up to race Weâ€™ve probably never seen this. I donâ€™t know when there were six different winners in the first six races. It just shows that a lot of great teams are out there and you have to be on top of your game. It just shows how many people can win.”

Blaney and the rest of the field found themselves staring at Larson’s back bumper for a good portion of the day. Larson first took the lead after a competition caution at lap 25 from the pole sitter Hamlin and expanded his to as high as ten-plus seconds as the afternoon played out. Save for brief reprieves during green flag pit stops, Larson led for the next 189 laps, allowing him to earn victories in the first stages, consisting of 105 circuits apiece.

The No. 12 team first flexed their muscles on lap 220, when Larson teammate Chase Elliott’s car began smoking. On the ensuing pit stops, Blaney emerged first after a strong stop. He was forced to relinquish the lead to remove some debris from his grill by using the draft behind Larson. The No. 5 kept the lead after the pit cycle but Blaney was able to chase him down through a strong stop and taking care of his tires on Atlanta’s seasoned surface. Blaney made the pass with nine laps to go and stretched it out to a second to earn a victory.

“He had a huge lead there in that second stage, then he didnâ€™t really get that far out in front of me in the start of the third stage,” Blaney recalled. “Then we were running him down pretty good until we pitted there. He got a little bit ways away from me on pit road after we came out. He stretched his lead out a tiny bit. I was like, All right, itâ€™s going to be a 50-plus-lap run, Iâ€™m going to try to save my stuff a little bit.”

“The guys did a great job getting me out there ahead of him. They were holding off for a little bit, but he was just so good on the short run there.”

Blaney’s besting of Larson continued some unusual trends on the NASCAR spectrum. Each of Blaney’s five Cup Series victories has come through a victorious pass of the leader with less than ten laps to go while Larson has never won a race in which he has won each of the first two stages.

The win also held personal significance to Blaney, whose father Dave ran at the Cup level for parts of 17 seasons. While the elder Blaney never had the best equipment to work with, he came close to a victory two decades prior at AMS while driving the No. 93 Dodge for Bill Davis Racing. Dave led 70 laps but lost a tire and was relegated to 34th.

With fans welcomed into Atlanta at the highest rate allowed by the state of Georgia, Dave was in attendance to see his son earn the victory.

“I donâ€™t know how solar cycles line up, every 20 years, I donâ€™t know. (But I’m) happy we were able to avenge that loss on him,” Ryan Blaney said. “Whether itâ€™s a stern talking to or itâ€™s careful advice, Iâ€™ve always enjoyed talking to him, hearing what heâ€™s got to say. Just him being around means a lot. I grew up watching dad race. Now Iâ€™m racing full-time in NASCAR. Heâ€™s watching me. Thatâ€™s pretty cool.”

The NASCAR Cup Series will return to Atlanta for the Quaker State 400 presented by Wal-Mart on July 11.

As a former sprint car racer and World of Outlaws champion, Dave will likely have some helpful advice for his son with next weekend’s event looming. For the first time in over five decades, the Cup Series will race on dirt, heading to a modified version of Bristol Motor Speedway next Sunday afternoon (3:30 p.m. ET, Fox). Qualifying races will be held the Saturday beforehand (6 p.m. ET, FS1).