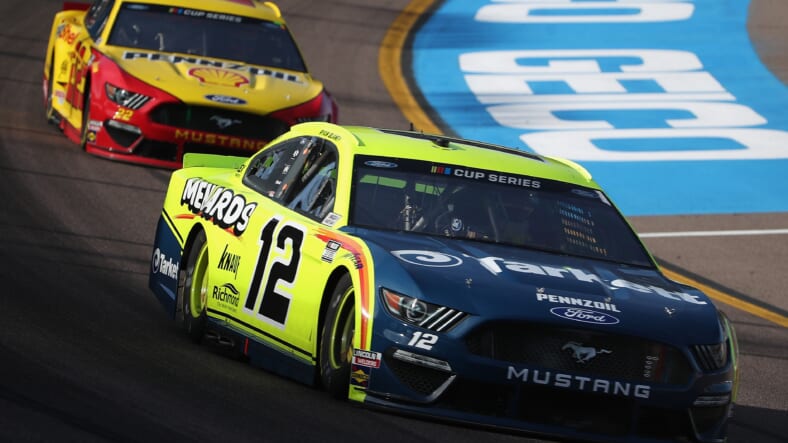 Ryan Blaney’s acting up in more ways than one on the NASCAR circuit, earning first top-five of 2021 and guest-starring on The Crew.

As the world reaches its first full year under the ongoing pandemic, many have taken the time to reflect on where they’ve been and how they’ve grown as welcome normalcy begins to inch its way back into society.

The sensation is coming full circle for the NASCAR Cup Series, which will return to Phoenix Raceway on Sunday (3:30 p.m. ET, Fox). Recently refurbished, Phoenix hosted the last NASCAR event with the traditional trappings and fanfare normally seen on race weekend, including fully open grandstands. The ensuing event at Atlanta was postponed five days after Joey Logano took home the checkered flag in the desert.

That week was slated to be a forgettable one for Ryan Blaney. He was likely eager to get past Phoenix, as his No. 12 Team Penske Ford came home 37th after it was involved in a wreck with Denny Hamlin on lap 59 of 312. But he remembers being at Chase Elliott’s house in Georgia and that he and his close friend were on their way to the track before they received the shutdown notice.

“We were reading things of NBA shutting down and things like that, so we didnâ€™t really know what was gonna happen, so we were about to head out the door and they said it got canceled,” Blaney recalled during media availability this week. He extended sympathy to what was happening to his fellow teams and competitors but lamented the loss of livelihoods beyond the track.

“It was a difficult thing for everybody on the teams and things like that, but in the bigger picture, it was very difficult for people around the world, any job,” he said. “It changes everyoneâ€™s lives, so it definitely doesnâ€™t feel like a year. Hopefully, weâ€™re making progress on this thing of getting the world healthy again, but itâ€™s changed the way that our sport has operated.”

The two-month stoppage came at a strange time for Blaney and Team Penske. Prior to the 2020 season, the team played a de facto game of musical chair with the team’s crew chiefs. Blaney was assigned the services of Todd Gordon, a Camden, NY native and 2018 Cup Series champion alongside fellow Penske rep Joey Logano.

The pairing struggled in the early going after a runner-up finish at the Daytona 500, capped off by the wreck at Phoenix. But once NASCAR returned in mid-May at Darlington, Blaney rattled off top-four finishes in six of the next seven races, a stretch capped off in a photo-finish victory at Talladega.

A brutal first-round of the playoffs stifled the No. 12’s momentum, though his teammates Logano and Brad Keselowski were in contention for the championship at the return trip to Phoenix for the season finale last fall. But Blaney was pleased with what the team has been able to accomplish over the past year.

“Iâ€™m really proud of what weâ€™ve been able to do, the whole team,” Blaney said. “(When) everything shut down, I thought we did the best we could of still communicating and unload with no practice and trying to make the most of it, so itâ€™s just nice to build off of last year, coming back with the same people on your team I think really helps figuring out what you need to do to be better.”

Blaney had to rediscover his 2020 resilience when the ongoing season got off to a painful start at Daytona. Late contact with Elliott cost him a chance for the win at the Busch Clash exhibition before he was caught up in an early “Big One” in the main event. Another wreck with Aric Almirola ended his chances at the third race at Homestead, putting him in a 24th-place hole in the standings. With different winners emerging in each of the first few races thus far, Blaney sat in a somewhat-precarious 24th-place spot.

But the No. 12 crew got things together at Las Vegas, rounding out the top five behind winner Kyle Larson. It was the first time this season that he ran in the top five after the tough start to the year. He currently holds the 15th and penultimate playoff seed in the Cup Series playoff standings, three points ahead of first man out Ricky Stenhouse Jr.

“Weâ€™ve struggled getting going this year, but just unfortunate things happened.Â  It was nice just to have a solid run.Â  I didnâ€™t think we had a car that could contend for the win,” Blaney said. “We all thought at Homestead our mile-and-a-half cars werenâ€™t great and we put a lot of work in before Vegas changing some stuff up and it showed, so I apply that to both packages and definitely do that here this weekend for Phoenix going forward.â€

Blaney will start eighth for Sunday’s race at Phoenix, the Instacart 500. Prior to last season’s wreck, he posted consecutive third-place finishes in the desert and recovered to sixth in the 2020 season finale, second-best amongst the non-championship contenders.

But the track on everyone’s mind in the near future is undoubtedly the newly muddied Bristol Motor Speedway, which will host the Cup Series’ first-ever dirt race on March 28. While Blaney hasn’t taken to iRacing like many of his compatriots, he might have a resource few other drivers own: secondhand experience through his father.

Blaney’s father Dave, who ran nearly 500 races at the Cup level, is an accomplished dirt racer in his own right, earning the 1995 World of Outlaws championship. The younger Blaney believes that the biggest factor in this unchartered endeavor will be the unpredictability of stock cars racing on dirt.

“Itâ€™s nice we have practice and itâ€™s nice to have a dad that I can maybe talk to about what he thinks,” Blaney said. “His sprint cars are way different than what weâ€™re gonna be driving, but just as far as looking at the dirt track, if itâ€™s slicking off, if thereâ€™s a little bit of moisture everywhere, thatâ€™s just kind of heads-up.”

“You can expect all you want to, but until you get there and you see what the track is like and how much water theyâ€™ve put down on it, if itâ€™s rubbering up, if itâ€™s really slick, thatâ€™s just game time stuff.Â  Thatâ€™s what makes those dirt guys so great at what they do is they have to notice that every single lap and it changes every lap and they have great ability to really switch up what theyâ€™re doing.”

Like many innovators during the health crisis, it would appear that Blaney picked up a new skill during the lockdown period. Blaney guest-starred in a pair of episodes ofÂ The Crew, a Netflix comedy series starring Kevin James.

Surprisingly, however, it’s not the only screen credit to Blaney’s name. He appeared on episodes of NBC’s episodic adaption of the action filmÂ Taken and the Magnum P.I. reboot on CBS. He also held voiceover roles in Cars 3Â and theÂ animated Spider-Man series on Disney XD.

Blaney would be open to more acting roles, having gained a deeper appreciation for the behind-the-scenes work of on-screen.

“I really enjoy seeing the behind-the-scenes on movie or TV sets,” Itâ€™s actually really fascinating if youâ€™ve never seen behind-the-scenes sets of how many men and women are involved in production and preparation that are never on screen. Everybody from the writers to the director to the light person.

“Thereâ€™s a lot of people that are involved with that that never get any recognition that arenâ€™t on the TV, and itâ€™s kind of the same with racing.Â  There are a lot of people in these race shops that are never at the track, things like that, but they do a lot of work, whether itâ€™s building chassis or putting body on the car, engineer work.Â  I kind of compare it to that.”

But he made one thing abundantly clear: he’ll walk off the set if showbiz interferes with his racing career.