NASCAR: Ryan Blaney holds off powers of Hendrick to win at Michigan 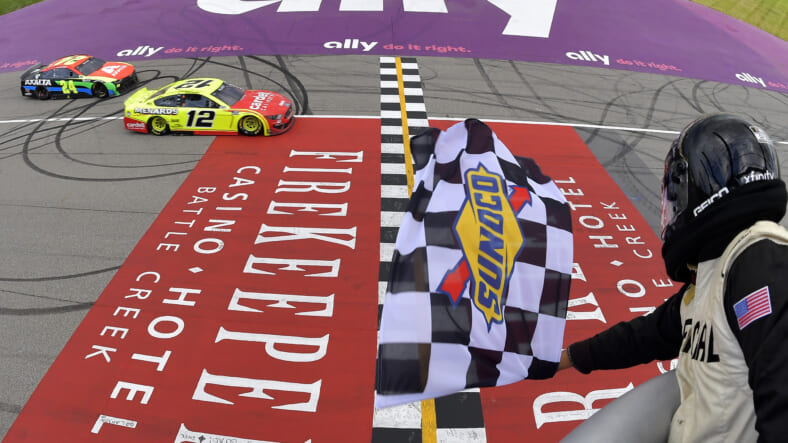 With his win at Michigan, Ryan Blaney has now won multiple NASCAR Cup Series races in a single season for the first time in his career.

RETWEET to congratulate Ryan @Blaney on his WIN at @MISpeedway!

WHAT A FINISH! #NASCAR pic.twitter.com/ML4uJBiOSy

Faced with a challenge from Hendrick Motorsports’ finest, Ryan Blaney made sure that Sunday’s Firekeepers Casino 400 at Michigan International Speedway was, instead, Penske material.

Blaney’s No. 12 Team Penske Ford took advantage of a late restart, taking his first lead of the day at lap 193 of 200. He then held off a furious rally from the HMS duo of William Byron and Kyle Larson long enough to earn his second win of the season and first since Atlanta in March. Blaney held off Byron by 0.077 seconds to secure the win and his first multi-victory season at the Cup level. Larson, leader of a race-high 70 laps, finished third while Kurt Busch and Denny Hamlin rounded out the top five.

Blaney started the afternoon in the third spot but quickly fell out of the top 15. His descent allowed HMS Chevrolets to take over. Chase Elliott won the first 60-lap stage in his No. 9 Chevrolet. Kyle Busch won the second stage for Joe Gibbs Racing but Elliott (8th), Byron, and Larson united to lead 136 of 200 laps. After Elliott faded after the second stage (pitting twice within 13 laps for tires), Byron and Larson appeared to do battle for the final victory.

Two late caution flags, however, set up late dramatics. A brief stop for rain set up a 16-lap shootout which was interrupted by a multi-car get-together that took out Joey Logano, Ryan Newman, Christopher Bell, and Josh Berry (who was subbing for Corey LaJoie in the No. 7 Spire Motorsports Chevrolet due to COVID-19 protocols). Blaney was situated in the fourth spot when the race went green again with eight to go after the chaos.

We'll restart with less than 10 laps remaining. GET TO NBCSN NOW!

Using a strong push from Kyle Busch (7th), Blaney managed to clear the front row of Byron and Kurt Busch to secure the lead. He then held off Hendrick’s finest, denying them their 12th victory of the season. Blaney also allowed the Ford Motor Company to keep a dominant streak at MIS alive. Those repping the blue oval have now won seven straight races in Brooklyn.

Sunday’s race at Michigan was the penultimate race of the NASCAR Cup Series’ regular season. All but one spot in the 16-seed playoff field has been clinched as Kevin Harvick (14th) secured his spot on points. One final spot is up for grabs at the Coke Zero Sugar 400 at the famed Daytona International Speedway on Saturday (7 p.m. ET, NBC).

Tyler Reddick (29th) missed an opportunity to expand his hold on the final seed after his teammate Austin Dillon (36th) was involved in a wreck after stage two ended, as contact with Brad Keselowski put him into the wall. Reddick leads Dillon by 22 points for the final spot, though he would lose it if a winless driver inside the top 30 in points managed to win at Daytona.