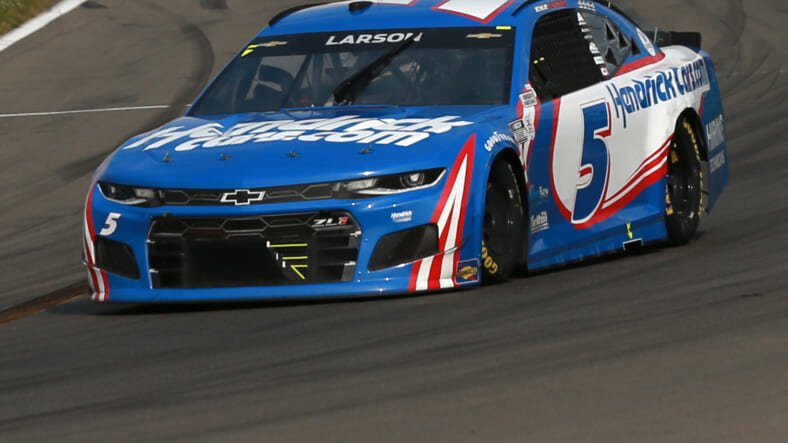 Larson ended Chase Elliott’s monopoly on Schuyler County, leading the last 27 laps in the return of the NASCAR Cup Series.

RETWEET TO CONGRATULATE KYLE LARSON ON HIS WIN AT WATKINS GLEN.#NASCAR | @TeamHendrick pic.twitter.com/3WWV1szByY

We now return to our regularly scheduled NASCAR programming.

The NASCAR Cup Series ended two different pauses on Sunday at Watkins Glen International: Sunday’s Go Bowling at The Glen event not only ended a two-week hiatus for the circuit due to the Tokyo Olympics but also its return to Schuyler County. A Cup Series staple since 1986, WGI’s date was canceled in the wake of the COVID-19 pandemic last season. Sunday’s return produced a familiar result.

Kyle Larson led the final 26 laps of Sunday’s race, earning his series-best fifth victory of the year and his first at The Glen. Larson’s No. 5 Hendrick Motorsports Chevrolet denied teammate and defending Cup Series champion Chase Elliott a chance to become the first driver since Jeff Gordon to win three consecutive Cup races at The Glen (1997-99). Elliott did finish in the runner-up spot, marking the fourth time he and Larson have swept the top two positions this season.

Larson ran started the race in fourth behind the Team Penske Fords of Brad Keselowski, Joey Logano, and Ryan Blaney. Keselowski, the pole sitter, led the first nine laps before spinning, as his day was marred by brake issues. Logano’s No. 22 Ford would win the first of two 20-lap stages before giving way to Gibbs Toyotas. Over the second segment, Larson battled Truex and Christopher Bell for the lead, getting into trouble when contact spun the latter’s No. 20. Larson apologized to Bell, who recovered to finish seventh, during his postrace interview with NBC Sports.

Kyle Larson locks it up entering turn 1, and gets into the No. 20!

Truex, winner of The Glen’s 2017 event, won the second stage and occupied the two spots with Larson when each of them made their final pit stop of the day with 33 laps to go. A strong service from the No. 5 crew allowed Larson to get off first, giving him the inside edge for the lead when pit stops cycled around. The resulting big interval, peaking at over 12 seconds, allowed him to hold off the charging No. 9 of Elliott, who sliced Larson’s lead down to 2.4 seconds after getting around Truex for the runner-up slot.

Elliott’s second-place run capped off a roller-coaster day for the No. 9 team. They were forced to start from the rear of the field after failing prerace inspection due to a faulty rear-window air deflector. Multiple failures led to the ejection of Elliott’s crew chief Alan Gustafson and the loss of 10 points in the championship standings (Bell dealt with the same issues, losing his crew chief Adam Stevens).

Larson has now earned five wins this season, breaking his previous career-best of four set during the 2017 season. Two of those wins have come at road courses, having previously won at Sonoma in June. This latest win also ties Larson for the Cup Series’ regular season points lead with Hamlin, who has yet to visit victory lane this season. Elliott’s seven wins on road courses, including the most recent at Road America, are good for third-best in Cup Series history, behind only fellow champions Gordon (9) and Tony Stewart (8).

Another road course lingers next week. The Cup Series will make its maiden voyage on the road course at the legendary Indianapolis Motor Speedway for the Verizon 200 at the Brickyard (1 p.m. ET, NBC).