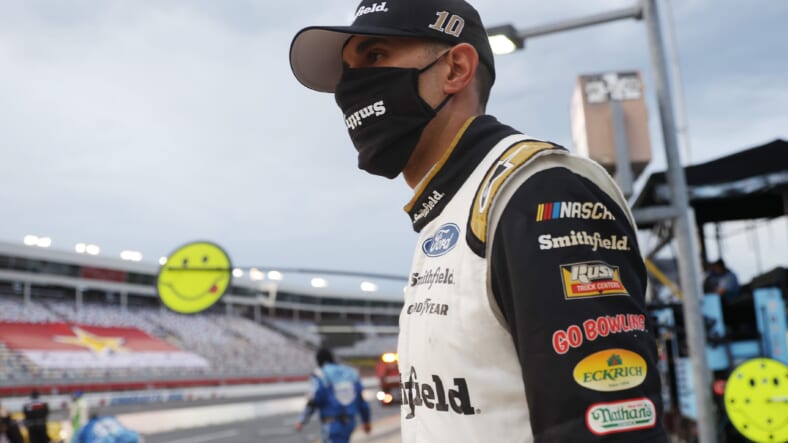 CONCORD, NORTH CAROLINA - MAY 24: Aric Almirola, driver of the #10 Smithfield Ford, walks back onto pit road after a rain delay during the NASCAR Cup Series Coca-Cola 600 at Charlotte Motor Speedway on May 24, 2020 in Concord, North Carolina. (Photo by Chris Graythen/Getty Images)

After a third-place finish at Talladega, Almirola credited an unlikely source for kickstarting his NASCAR journey.

Reggie White had a knack for striking fear into those who wore No. 10. After all, the numeral was well within the allotted range for NFL quarterbacks, who were victimized 198 times by the Minister of Defense.

For Aric Almirola, however, White was a source of hope.

White was one of the biggest influencers behind NASCAR’s Drive for Diversity initiative, one that seeks to increase the minority and female influence and impact on the sport. He and another NFL legend, former head coach Joe Gibbs and current NASCAR owner Joe Gibbs, kickstarted the program in 2003 with a class that included Almirola, one of the sport’s first drivers of Cuban descent.

“I feel lucky and I feel fortunate that somebody would step up and step out like he did to start the program that he did,” Almirola said after Monday’s GEICO 500 at Talladega Superspeedway. “Reggie, the very first time I met him, he said, ‘The reason I’m doing this is I love racecars, I love cars, I love watching racing.”

“Coming with (Gibbs) to watch a few of these NASCAR races, I fell in love. I want to start a team and give a driver, drivers, crew members an opportunity from the grassroots level to work their way into the system.”

For the time being, Almirola remains a NASCAR Cup Series staple. He has been a full-time racer on the premier since 2012 and is in the midst of his third season behind the wheel of the No. 10 Stewart-Haas Racing Ford. He has reached the playoffs in each of his first couple of seasons and strengthened his case for a return trip with a third-place finish on Monday. Typical Talladega calamity ensued on the final lap, as Almirola completed his top-three run backward as the pack failed to beat out Ryan Blaney for the win.

Almirola currently sits 12th in the standings with a 32-point cushion the postseason’s cutoff line. He was able to build with back-to-back top-five finishes, with Talladega’s posting coming immediately after a fifth-place showing at Homestead-Miami Speedway. A prime opportunity to carry on the momentum comes this weekend at Pocono Raceway. Almirola will get a doubleheader rolling on Saturday afternoon, having earned the pole for the Pocono Organics 325 in partnership with Rodale Institute (3:30 p.m. ET, Fox) via random draw.

“I‘m happy to finish top five another week in a row, I felt like we were really close to winning that one,” Almirola said of the race. “(We were) so close with our Smithfield Ford Mustang. We had the strategy of kind of riding around surviving most of the race. We didn’t race very aggressively early on in the race. As the laps wound down, I got to the front, then I got shuffled. Right there on that (final) restart we found ourselves back in position. We had a really fast Ford Mustang.”

Exciting as it was, Monday’s Talladega event (whose victory Almirola missed by 0.025 seconds) was forced to take a bit of a backseat when a noose was found in the garage of Bubba Wallace, Almirola’s fellow Drive for Diversity alum and the only African-American driver on the circuit. An FBI investigation concluded after the race determined that the noose was not a hate crime (having been in the stall since last October’s Cup event) but such a sight was still troubling to drivers and observers alike.

Prior to the GEICO 500, Wallace’s fellow drivers pushed his No. 43 Richard Petty Motorsports Chevrolet to the front of the field and stood behind him during the invocation and national anthem.

As a Cuban-American driver, Almirola admitted that while the scrutiny outside of NASCAR jurisdiction has been nothing compared to what Wallace has had to go through, he sympathized and wished him well.

“I’m a Cuban American. My dad and his whole side of the family came from Cuba in 1966.Â Â So growing up trying to race as a Cuban American, sure, I’ve had things said to me, things that were offensive, that hurt. I actually told Bubba this morning that on a very, very small scale I can relate and I can empathize. I have never had to go through what he’s had to go through in the last couple of weeks, and especially in the last 24 hours. I feel for him immensely.”

Almirola previously drove the iconic No. 43 car for six seasons. Wallace admitted that he and Almirola “didn’t click very well” during a Friday afternoon press conference, but mentioned that his regards stuck out during his process.

“Aric Almirola sent a nice text right before all of that on Monday,” Wallace noted. “He was saying how we’re not friends and we don’t act like we are, but we’re going to stand next to each other, that he’d be proud to stand next to me as a brother and a human being. I thought that was really special.”

In addition to his future prospects, which include a third consecutive playoff berth and seeking his first win since October 2018’s Talladega event, Almirola is glad to play a part in NASCAR’s changing landscape. He notes that the he’s proud to part of the changing field, which includes newcomers in the pits, in front offices, and in the stands.

“I think that the sport has worked so hard since I got my opportunity in 2004 to adapt,” Almirola noted. “I think NASCAR has forever been considered an All-American sport. All of America has changed and evolved a lot over time. I think that NASCAR has done an incredible job of being inclusive and making sure that the garage area, the spectators, the fan area, that they all resemble all of America. I have been so proud to be a part of that initiative and that drive.”

“They continue to adapt and evolve and make our sport a more inclusive sport where people can feel welcome.Â Â If you like racecars, fast racecars, the adrenaline rush of cars going 200 miles an hour side-by-side like you saw (on Monday), you should be able to come and be a part of it whether as a competitor or spectator and participate and enjoy it.”