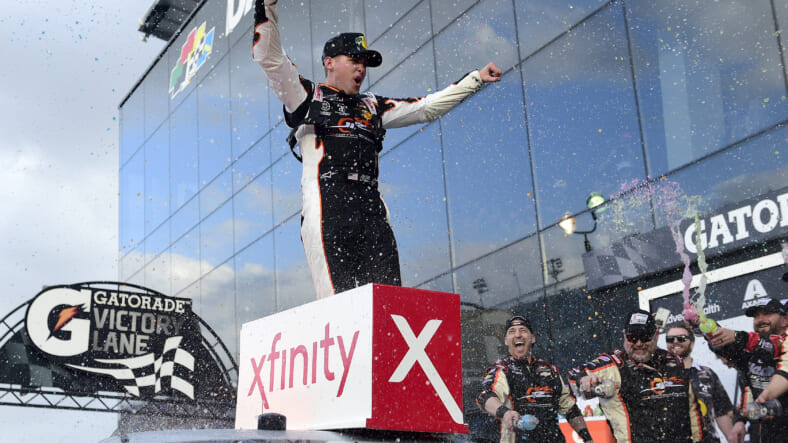 Gragson, 22, is coming off a strong showing in the NASCAR Xfinity Series. He will take over the vehicle vacated by Brendan Gaughan.

Per Chris Knight of Catchfence.com, rising NASCAR prospect Noah Gragson will make his Cup Series debut at the 2021 Daytona 500 in February. He is set to pilot the No. 62 Chevrolet for Beard Motorsports.

Gragson, 22, is coming off a strong in the NASCAR Xfinity Series, driving the No. 9 Chevrolet for JR Motorsports, a team co-owned by Dale Earnhardt Jr. and Rick Hendrick. He won two races, including the Xfinity opener at Daytona, and eared top-ten finishes in 25 of 33 events. This offseason, Gragson announced that he would return to the No. 9 car on a full-time basis for the 2021 Xfinity season, which begins on February 13, the day before the Daytona 500.

Gragson has earned a reputation for aggressive driving but has been viewed as a rising star amongst NASCAR’s lower-tier series. His ledger also includes a pair of victories on the NASCAR Camping World Truck Series circuit, both in vehicles owned by two-time Cup Series champion Kyle Busch. Gragson came home in the runner-up spot in the 2018 Truck Series standings, behind only Brett Moffitt.

Beard Motorsports, headed by former part-time Xfinity driver Mark Beard, had run a part-time NASCAR schedule throughout the course of the past decade. Their No. 62 car has appeared in every Cup Series race held at Daytona and Talladega (both two-plus mile superspeedways) since 2017, driven by NASCAR veteran Brendan Gaughan in each of those appearances. Gaughan kept the car competitive, running at the finish in 11 of 17 starts. His best finish was a seventh-place posting in last season’s opener at Daytona. Winner of ten races at the Xfinity and Truck levels, Gaughan announced his retirement after the 2020 season.

The No. 62 car will likely have to race its way into the race through one of the 150-mile qualifying races held prior to the main event.