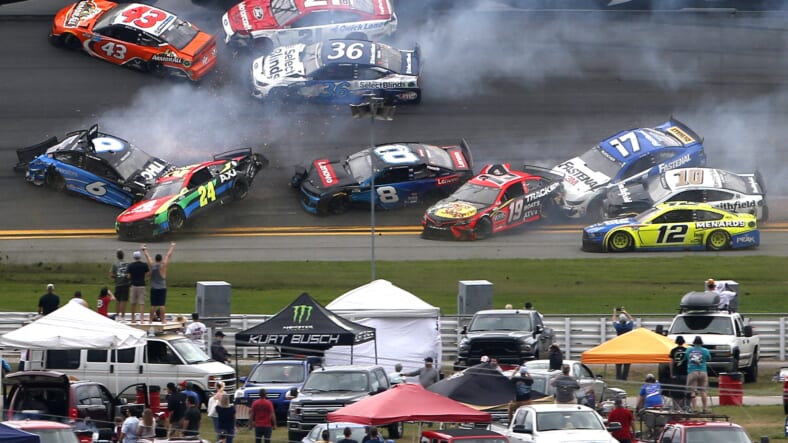 Michael McDowell hadn’t won in any of his first 357 NASCAR Cup Series starts. He was more than likely willing to wait a few extra hours brought up by rain.

In the wee hours of Monday morning, McDowell’s pass of Joey Logano on the 200th and final lap of the Daytona 500 allowed him to earn his first career Cup Series victory. His No. 34 Front Row Motorsports Ford led only the final lap but now goes down in history as a winner of NASCAR’s most prestigious race. It’s the first time mid-budget FRM has visited victory lane since Chris Buescher won a rain-shortened summer race at Pocono in the same No. 34 car in August 2016. The victory also allowed McDowell to clinch the Cup Series playoff spot that comes with the win.

“Don’t give up. I think that’s what it’s all about…keep fighting hard. That’s not just the moral of my NASCAR journey, it’s the moral of everyday life. It’s the moral of our raceteam. You just never know what’s possible,” McDowell said about his upset victory. “I always knew if you just kept grinding , everything will line up…I’m just thankful to everyone who made it possible.”

McDowell, 36, has been racing at the Cup level since 2008, thrown into one of Michael Waltrip Racing’s original Toyotas after strong years of open-wheel racing. Years of struggling to gain traction followed, forcing him to take on several odd jobs and low-budget rides. A culmination of bad luck and poor equipment has led McDowell to take over the dubious record of most last-place finishes in Cup Series history (34).

But throughout the tough process, McDowell kept a strong sense of faith that never wavered. Even when he was languishing in “start-and-park” rides, taking over microbudget cars built solely to earn a last-place purse, he was confident that the elusive victory was eventually coming. Now, he takes home a title in one of auto racing’s most renowned events.

“Even when I was start and parking, I knew Id’ be able to have a shot at it…I never lost hope in that,” McDowell said. “I really think every weekend, this is the week it’s going to happen. I know that sounds crazy.”

The prowess of McDowell and FRM at superspeedway races was well documented. FRM’s first Cup victory came at Talladega in 2013, when David Gilliland pushed David Ragan to the triumph on the final lap of the Aaron’s 499. McDowell himself was a staple in the top percentiles of many superspeedway events at both Daytona and Talladega, previously earning a top-five in the Great American Race back in 2019. This time, however, he was ready to close the deal.

Drivers played things mostly conservatively after the 2021 edition of “The Big One” took out several contenders on lap 15. That incident took out 16 contenders on its own, including McDowell’s FRM teammates Ragan and Anthony Alfredo. Ragan was temporarily ending his retirement to drive the No. 36 Ford while Alfredo was making his Cup Series debut in the No. 38. Other notable names involved in the accident included top qualifiers Alex Bowman and William Byron, as well their fellow 2020 playoff drivers Martin Truex Jr., Aric Almirola, Matt DiBenedetto, Ryan Blaney, and Kurt Busch. The incident started when contact from Christopher Bell sent Almirola spinning, triggering the big wreck. A red flag period of over five hours ensued when lightning storms visited the area.

Despite some close calls from there on out, drivers mostly kept to themselves in single-file racing for a majority of the final segments, working together in manufacturer-based alliances. McDowell lurked with his fellow Fords for a majority of the race and earned bonus points with a seventh-place finish after the second stage. The Ford group took the lead after final pit stops around lap 170, with Joey Logano taking the lead from Denny Hamlin, the Joe Gibbs Racing driver seeking an unprecedented third straight Daytona 500 victory.

Even as the laps dwindled away, drivers kept the single-file pace, a situation prolonged by the fact that only 15 cars were scored on the lead lap. But when Logano took the white flag, McDowell teamed up with Brad Keselowski to hunt down Logano for the win. The two made it up there, but, after disconnecting, Penske teammates Logano and Keselowski made contact, triggering a fiery wreck that also engulfed the cars of Kyle Busch, Austin Cindric. and Bubba Wallace. The caution came out with McDowell barely ahead of the Chevrolets of Chase Elliott and Austin Dillon. Harvick avoided the carnage of his fellow Fords to finish fourth, while Hamlin rounded out the top five.

“I don’t know Michael very well at all, but he certainly has stuck around over the years and battled hard throughout the course of his career…I respect it,” Elliott, the defending Cup Series champion said of McDowell’s win. “I’m happy for him. Hope he enjoys it.”

The NASCAR Cup Series will remain in Daytona for another week, as proceedings now move to the circuit’s road course next Sunday for the O’Reilly Auto Parts 254 (3 p.m. ET, Fox). This race will be the first of a record seven road course events on the 2021 docket. Elliott has won each of the last four races on such tracks and nearly won the exhibition Busch Clash all-star race held on the course on Tuesday night but lost out to Kyle Busch after late contact with Blaney.