NASCAR: Matt Kenseth made his Hall of Fame case at the Darlington return 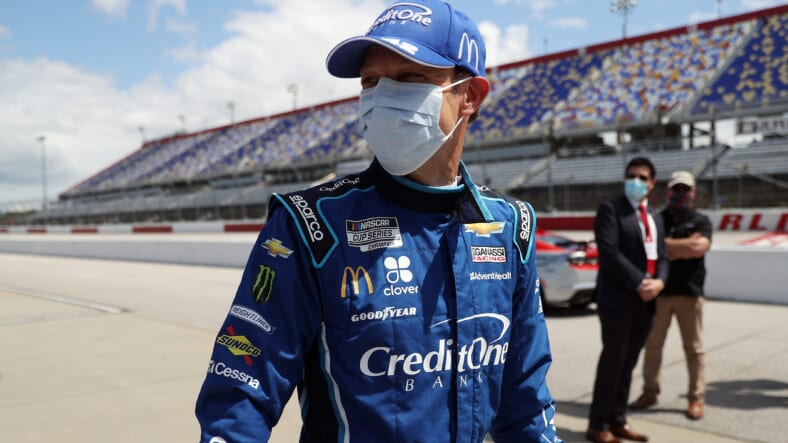 DARLINGTON, SOUTH CAROLINA - MAY 17: Matt Kenseth, driver of the #42 Credit One Bank Chevrolet, walks on to pit road prior to the NASCAR Cup Series The Real Heroes 400 at Darlington Raceway on May 17, 2020 in Darlington, South Carolina. NASCAR resumes the season after the nationwide lockdown due to the ongoing coronavirus (COVID-19). (Photo by Chris Graythen/Getty Images)

The return of NASCAR also brought the return of its 2003 champion. Here’s why Matt Kenseth’s top ten finish should put him in Charlotte.

Sunday’s NASCAR race, the Real Heroes 400 at Darington Raceway, was historic in more ways than one. American eyes were on the track, as NASCAR became the first national team sports league to return in the wake of the coronavirus pandemic. The first race of the social distancing era was won by Kevin Harvick, who became the 14th driver to win at least 50 Cup Series events. Rookies Tyler Reddick and John Hunter Nemechek earned the best finishes of their Cup careers to date.

To cap it all off, Matt Kenseth sealed his Hall of Fame case.

NASCAR’s return also brought about the return of Cambridge, Wisconsin native, as Kenseth has taken over Chip Ganassi Racing’s No. 42 Chevrolet. The 48-year-old was called out of retirement after the disgraced Kyle Larson was ousted for using a racial slur during a streamed virtual race. Sunday marked his first race behind Ganassi’s wheel and he brought the car home in the 10th position.

The 2003 Cup Series champion may be giving fellow Badger State sports legend Brett Favre a run for his money when it comes to rearrivals. He originally departed full-time racing in 2017 but came back less than a year later to his old friends at Roush Fenway Racing to temporarily fill the vacant No. 6 Ford after Trevor Bayne’s firing. His final Roush stanzas (which included a stage win at Indianapolis and concluding back-to-back top ten finishes at Phoenix and Homestead-Miami) appeared to be the end, but fate had other plans.

If and when Kenseth’s racing career finally ends, debate will probably reign over his Hall of Fame case. Entry into NASCAR Valhalla in Charlotte doesn’t seem to have a proverbial ticket like Cooperstown’s supposed 3,000-hit plateau. Kenseth’s former Roush teammate and fellow No. 6 alum Mark Martin reached Queen City without a title in any of NASCAR’s three major series. Meanwhile, posthumous 2019 inductee Alan Kulwicki (who tragically died in a plane crash months after winning the 1992 Cup title) did make it, but, along with fellow nominee Ron Hornaday Jr. (who ran only 46 Cup races but won four titles on NASCAR’s lower-tier Truck Series level), did so with less than half of the vote. They nonetheless were brought in by the Hall’s five-inductee quota (NASCAR has since lowered the yearly Charlotte inductees to three).

The phenomenon is not to downplay Kulwicki or Hornaday’s accomplishments by any stretch. Kulwicki, for example, was one of the last drivers to successfully pull off the driver/owner double-dip. But it just went to show that a Cup trophy wasn’t the be-all, end-all for racing glory, especially in the eyes of voters.

Kenseth probably could’ve made it sooner or later, but reducing the welcome wagon’s capacity might’ve caused him to wait a little a bit longer than the three post-retirement years necessary for eligibility. His 39 wins and 330 top ten finishes are far more than acceptable, but some in fact smeared Kenseth’s illustrious title because of the mere single win it carried. Such a feat hadn’t been accomplished since Benny Parsons’ trek in 1973, the second year of NASCAR’s so-called “modern era”. So while not fully entertained, doubts still could’ve been raised about locking Kenseth in Charlotte’s halls.

Contrary to what its detractors may say, sanctioned auto racing is not a mere case of taking your Honda Accord to the nearest cul-de-sac and driving counter-clockwise 200 times. New innovations are happening on and off the track and the cars are in constant flux. The on-track machines of 2020 differ from the racers even two years ago, the last time Kesenth was on the courses. Such changes aren’t as drastic as what NASCAR has in store for the 2022 season (when they’re expected to introduce the new racecar known as the “Next Gen”) but it was certainly a tall task to ask a driver to keep a car competitive, even one as healthily funded as Ganassi’s No. 42, in a package he never ran with little to no practice or even a qualifying session.

DARLINGTON, SOUTH CAROLINA – MAY 17: Matt Kenseth, driver of the #42 Credit One Bank Chevrolet, drives during the NASCAR Cup Series The Real Heroes 400 at Darlington Raceway on May 17, 2020 in Darlington, South Carolina. NASCAR resumes the season after the nationwide lockdown due to the ongoing coronavirus (COVID-19). (Photo by Chris Graythen/Getty Images)

But Kenseth consistently ran in the race’s upper portions, adapting well to the unusual situation. As it stands now, he now has top ten finishes in each of his past three Cup Series races. Work needs to be done if Kenseth is to secure a playoff berth…a win and a finish in the top 30 points is likely the ideal solution…but Sunday’s debut was a solid start. The quest continues, weather-permitting, on Wednesday night at the Toyota 500 (6 p.m. ET, FS1), where the No. 42 will start 11th.

Pleasent of a surprise as it was, Kenseth’s contemporaries may have seen Sunday’s revival coming.

“From my standpoint, I’m like, I don’t want him back,” competitor Denny Hamlin said prior to Kenseth’s return. “I know he gives great information. He can give an organization information. It’s another voice that that organization will hear that’s different than what they’ve had over the last few years. Not better or worse, but just different. So I think he’s probably going to lift that program up, similar to what he did to Roush towards the end.”

“He’s my buddy, but I prefer him just to stay home at this point. I mean that jokingly.”

Hamlin’s fears were well-founded. He and Kenseth were teammates for five seasons at Joe Gibbs Racing.

Kenseth’s 10th-place finish was perhaps an all too poetic occurrence. His lone, one-win championship was notorious for consistency, featuring an average finish of 10.2. So monumental was his final season that some attributed NASCAR’s playoff procedures to his dominance, which eliminated most, if not all, of the drama of the 2003 session’s final stanzas.

Sunday’s winner Kevin Harvick hinted that it might not be long until we see Kenseth in victory lane again and that his prescience can bring in new fans while the series enacts a stranglehold on the American sports fan’s imagination, at least for a while.

“Hereâ€™s the thing about Matt Kenseth: he should have never quit,” Harvick said. “Matt Kenseth was winning races when he retired. I think as you look at that whole situation of when you he got kind of moved out of Gibbs, Matt Kenseth is going to be a huge part of that race team and making Chip Ganassi Racing better. Heâ€™s going to be great for the sponsors.”

“I think as you look at that, I mean, experience and skill go a long way in our sport. If you have those two things, like Matt does, youâ€™re going to be successful. You donâ€™t just forget how to do that.”

Darlington will come first in the immediate future for Kenseth. Charlotte does as well…after all, the series travels there for a doubleheader next week…but his Myrtle Beach exploits should keep the latter in his potentially distant NASCAR hereafter as well.