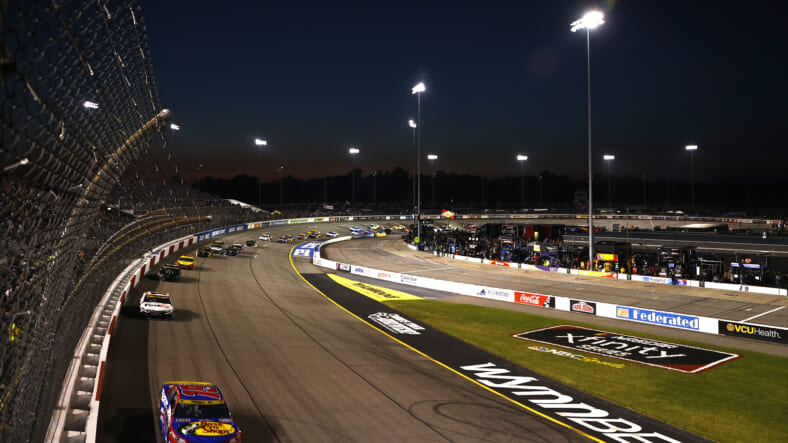 Martin Truex Jr. clinched his spot in the second round of the NASCAR Cup Series playoffs with a win at Richmond Raceway.

His fourth win of the season puts him through to the Round of 12 in the #NASCARPlayoffs. pic.twitter.com/VO9ibZC8Ui

Joe Gibbs was always known for earning big wins near Virginia as an NFL head coach in Washington. That trend carried over on Saturday night at Richmond Raceway.

Truex, driver of Gibbs’ No. 19 Toyota Camry, led the final 51 laps of the Federated Auto Parts 400 en route to his fourth victory of the Cup Series season and his first since the first race at Darlington in May. Gibbs Toyotas have won each of the first two Cup Series postseason races of 2021 after Denny Hamlin’s No. 11 won at Darlington’s opener last weekend.

Truex Goes From First to Last to First

Truex began the 31st victory of his Cup Series career on the front row but was quickly forced to the back. NASCAR officials determined that he jumped the start, passing Hamlin (the de facto pole-sitter after Kyle Larson had to start from the back) as the field took the green flag. The No. 19 was forced to serve a pass-through penalty, though he was able to stay on the lead lap. Truex made his way back to the top 10 by lap 70 of 400 and took his first lead of the day nearly 200 laps later.

The Mayetta, NJ native didn’t agree with NASCAR’s judgment but opted to look at the early infraction from an optimistic lens.

“Two laps after I pitted or whatever, I was like, this is ridiculous, but Iâ€™m already last now, so thereâ€™s nothing I can do except for go forward,” Truex said after the race. “I donâ€™t really understand what youâ€™re supposed to do in that situation. I let the 11 get a nose out in front of me to get the launch first. I wasnâ€™t going to jump him, and then he spun the tires and stopped. What am I supposed to do, stand on the brakes, and crash the field behind me? Itâ€™s ridiculous, but yeah, I got over it fairly quickly because thatâ€™s what it was, and we had to go forward.”

Truex historically struggled at Richmond prior to commandeering Gibbs’ No. 19 in 2019, earning only three top five finishes in his first 26 visits. Over five starts at JGR, Truex has finished no worse than fifth at the short track and has visited victory lane three times. Truex claimed that there has been no official turning of the corner, believing his Richmond revolution was an endeavor several years in the making.

Nothing really clicked. It wasnâ€™t like one thing we did. It was just kind of a work in progress more than anything,” Truex said. “Iâ€™ve always felt good at this racetrack and had some really good runs years ago in other cars with other teams. Honestly, itâ€™s more just great equipment, a great approach to the racetrack…Once we got in Gibbs cars and I guess 2016 is when we really turned the corner on being one of the guys to beat every time we come here.”

In that aforementioned September 2016 event, Truex, then driving the No. 78 Toyota for Furniture Row Racing, united with his future teammate Hamlin to lead 382 of 407 laps but missed out on the win in an overtime finish. Since then, Truex has been the driver to beat at Richmond: over the last 11 events, he has completed all but one lap at the 0.75-mile, D-shaped oval.

“We certainly gave a few away here in the past, and to have three is pretty awesome. Feeling lucky to have great equipment, and always look forward to coming here.”

Unlike last week’s postseason carnage at Darlington, playoff drivers mostly stayed out of trouble at Richmond on Saturday. Postseason contenders took up all but one spot in the top ten (Ross Chastain was the lone outlier in 7th) and 13 of the first 15 slots.

Alas, Kurt Busch ran into trouble early on. His No. 1 Chip Ganassi Racing Chevrolet was running third when he lost his left-rear tire at lap 40, shortly after a strong pit stop during a competition caution period. Busch was the only driver who failed to finish the race, relegating him to a last-place finish in 37th. He goes into next week’s race at Bristol as the last of the dozen drivers eligible for the second round of the playoffs, trapped in a tie with Alex Bowman.

“Had a damn good car, feeling deflated by how it all went down,” Busch said on Twitter in response to his bad luck at Richmond. “I thought Virginia is for lovers, but not feeling the love right now. On to Bristol baby, and we know what we gotta doâ€¦letâ€™s win!”

Bristol is certainly the place for Busch to secure a much-needed win: he was won a career-best six races at The Last Great Coliseum, second-best amongst active drivers behind his brother Kyle (8).

In terms of other playoff struggles, William Byron finished a lap down in 19th, placing him 18 points away from the 12th seed. A late speeding penalty on pit road relegated Michael McDowell’s No. 34 Front Row Motorsports Ford to 28th. The Daytona 500 champion is undoubtedly stuck in a must-win situation, as he’s 38 points away after the penalty and a wreck at Darlington last week.

After matching fourth-place finishes in the first two stages, it was determined that Kyle Larson had earned enough points to clinch a spot in the second round of the postseason. Larson and his No. 5 Hendrick Motorsports team already had a sizable advantage in terms of advancement prospects through a series-best five wins and the regular season championship. He finished the day in sixth.

The NASCAR Cup Series moves onto Bristol Motor Speedway next Saturday night for the final race of the first round of the playoffs (7:30 p.m. ET, NBCSN). Bristol’s famed asphalt will reappear, as the track was covered in dirt for the annual spring event, won by Joey Logano in March. Kevin Harvick won last year’s late summer event on the asphalt, uniting with runner-up Kyle Busch to lead 385 of 500 laps.