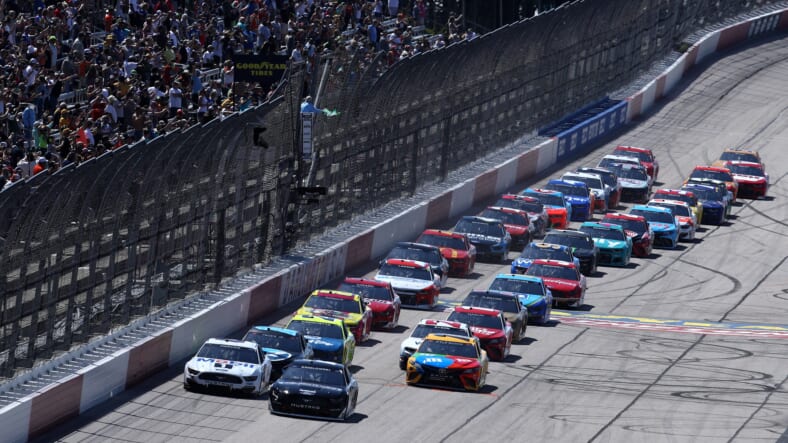 DARLINGTON, SOUTH CAROLINA - MAY 09: Brad Keselowski, driver of the #2 Freightliner Ford, and Kevin Harvick, driver of the #4 Mobil 1 Throwback Ford, lead the field to star the NASCAR Cup Series Goodyear 400 at Darlington Raceway on May 09, 2021 in Darlington, South Carolina. (Photo by Sean Gardner/Getty Images)

Martin Truex Jr. won his third race of the NASCAR Cup Series season by leading 248 of 293 laps at the Goodyear 400.

For his throwback endeavor at Darlington Raceway on Sunday, Martin Truex Jr. drove a black car inspired by his championship triumphs throughout NASCAR’s national series. He fully lived up to the billing in the actual event.

Truex’s No. 19 Joe Gibbs Racing Toyota led 248 of 293 laps in NASCAR’s annual celebration of turning back the clock, pacing a series of retro paint schemes to earn his third victory of the season at the Goodyear 400. Kyle Larson finished second, followed by Kyle Busch, William Byron, and Denny Hamlin.

Sunday’s win was the 30th of Truex’s career and his third this Cup Series season through a dozen events, having also won at Phoenix and Martinsville. He is currently the only driver in the Cup Series with multiple visits to victory lane with 24 races remaining on the docket. Each of his 2021 victories has come under a 750-horsepower, low-downforce race setup package. The package will bookend the ten-race NASCAR Cup Series postseason slate this fall, returning to Darlington in September and ending back in Phoenix two months later.

“Love low downforce, so I’m gonna say, I love it,” Truex said with a smile after the race. “I feel like, especially this year, with all three races that we won in with this package, the guys and girls at JGR doing a great job…it really was just a fun day, a big challenge, and I just got to give it out to my guys for giving me a great car and doing all the real things right.”

Truex started fourth on Sunday and first took the lead at lap 22 from his teammate Busch and proceeded to lead all but 23 laps afterward. To commemorate NASCAR’s annual “throwback” race, Truex drove a matte black Camry, a nod to his championship season driving a similarly colored Toyota for now-defunct Furniture Row Racing in 2017.

“I think it definitely had some good old Furniture Row, flat black mojo in it,” Truex said. “It was really fun, (but) I don’t know if it’s a statement (win). In this sport, you get judged week-to-week. If we go and run 10th next weekend, they’re gonna say okay, you know, the 19 is down, they’re not that good anymore. We just tried to try to take it week-to-week and have fun.”

“Our guys are doing a great job right now and when your cars are fast, things are clicking, and you know you’re having fun this is the coolest job in the world. When when you’re struggling, it’s probably the most difficult, because all the fingers get pointed at us. We’re going to enjoy it and just keep working hard.”

Truex held a healthy lead for almost all of the race’s latter stages, opening up a lead as wide as 14 seconds while winning the first two stages. Late in the race, Kyle Larson’s No. 5 Hendrick Motorsports Chevrolet got to Truex’s bumper after the final cycle of green flag pit stops with circa 40 laps to go. Truex withstood the late challenge and rebuilt his lead to 2.5 seconds when the checkered flag waved. Joe Gibbs Racing has now earned wins in consecutive events, with Busch winning at Kansas last weekend. Hamlin is winless but continues to lead the points standings, while Christopher Bell is likewise on the playoff grid through a win at the Daytona road course. Bell was running in the top five before a lost tire relegated him to 14th.

The NASCAR Cup Series returns to action at Dover International Speedway for the Drydene 400 next Sunday afternoon (2 p.m. ET, FS1).