NASCAR: Kyle Larson to return in Hendrick Motorsports’ No. 5 Chevrolet 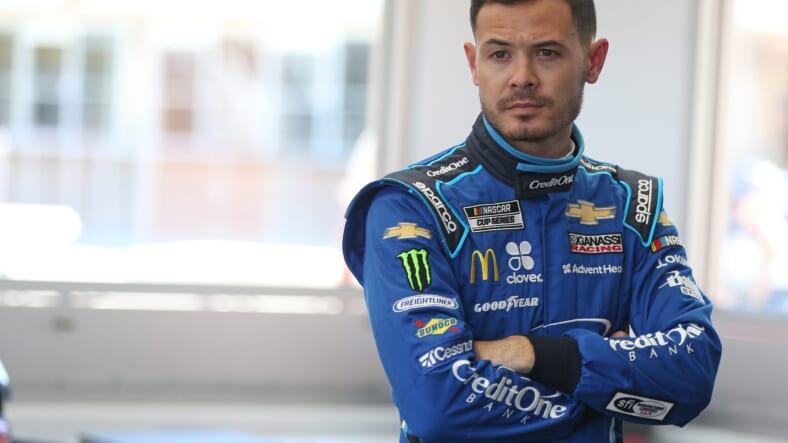 Reinstated from a slur-induced suspension, Kyle Larson will return to the NASCAR Cup Series in 2021, alongside HMS’ classic No. 5 Chevrolet.

Humbled, honored and so grateful for this next chapter in my life. Thank you @TeamHendrick look forward to great things on and off the track! pic.twitter.com/MFjFQlTpsi

Hendrick Motorsports announced on Wednesday that Kyle Larson will return to the NASCAR Cup Series in their rebooted No. 5 Chevrolet. Larson will be officially reinstated by NASCAR on January 1 after serving a suspension for using a racial slur during an event on the iRacing platform in April.

“Kyle is unquestionably one of the most talented race car drivers in the world,â€ team owner Rick Hendrick said in a statement from HMS representative Gabrielle McMillen. â€œHe has championship-level ability and will be a significant addition to our on-track program.”

“More importantly, I have full confidence that he understands our expectations and will be a tremendous ambassador for our team, our partners, and NASCAR. Kyle and I have had many, many conversations leading up to todayâ€™s announcement. Iâ€™m confident about whatâ€™s in his heart and his desire to be a champion in all aspects of his life and career. Kyle has done important work over the past six months, and Hendrick Motorsports is going to support those continued efforts.â€

Larson, 28, previously spent six full seasons in the No. 42 Chevrolet at Chip Ganassi Racing. He was suspended and later outright fired by CGR for addressing someone as “n*****” over the radio during a virtual competition streamed on Twitch. NASCAR issued an indefinite suspension and ordered Larson to undergo sensitivity training.

Since then, Larson has made efforts to atone for the incident, notably working with the Sanneh Foundation headed by former MLS and United States soccer star Tony Sanneh. Larson publicly spoke about the incident for the first time earlier this month in an open letter on his website and a televised interview with James Brown of CBS News.

â€œMr. Hendrick is one of the people who extended a hand to me over the past six months,” Larson said in the HMS statement. “Our initial conversations were not about racing. He cares about me as a person and wants to see me succeed beyond driving. I canâ€™t put into words how grateful I am for the commitment, the faith, and the confidence from him and everyone at Hendrick Motorsports.â€

Prior to his departure, Larson had won 20 races across NASCAR’s top three national levels, including six in the premier Cup Series. During his suspension, Larson competed in several events on the sprint car and midget car circuits, earning many victories, including the United States Auto Club’s Silver Crown Series finale on October 18 in Springfield, IL.

Larson’s arrival at HMS will also herald the return of the team’s No. 5 Chevrolet, which last appeared in 2017 (driven by Kasey Kahne). The car won 38 races, including the first in team history in 1984 (when it was known as All-Star Racing) with Geoffrey Bodine behind the wheel at Martinsville Speedway’s Sovran Bank 500. HMS has earned 319 more wins since then, including 260 at the Cup Series level. The team has also earned 12 Cup Series titles, including one from Terry Labonte in the No. 5 after the 1996 campaign. Other notable full-time drivers of the car include two-time Cup champion Kyle Busch and Hall-of-Famer Mark Martin.

Cliff Daniels will serve as the crew chief of Larson’s No. 5 team. Daniels currently serves as the crew chief for Jimmie Johnson’s No. 48 Chevrolet, which will be piloted by Alex Bowman next season. Johnson has earned a record seven Cup Series titles (tied with Richard Petty and Dale Earnhardt) and is set to retire from NASCAR at the end of this season.

The reversion to the No. 5 branding spells the end of Hendrick’s No. 88, now driven by Bowman. This car began as a part-time research and development vehicle, first donning the No. 88 upon Dale Earnhardt Jr.’s arrival in 2008, the first year it ran on a full-time basis. Bowman took over the car on a part-time basis when filling in for an injured Earnhardt Jr. in 2016 (along with four-time Cup Champion and semi-retired HMS driver Jeff Gordon) before being granted the full-time ride in 2018. The No. 88 won 11 races for HMS, its most recent coming with Bowman’s win at Fontana, CA’s Auto Club 400 in March. Larson joins the modern Hendrick stable of Bowman, William Byron, and Chase Elliott. Byron drives the No. 24 car made famous by Gordon, while Bowman and Elliott remain eligible for the 2020 Cup Series title in the Nos. 88 and 9 respectively.

The NASCAR Cup Series is set to return to action on Wednesday afternoon, as the series seeks to complete the long-delayed Autotrader Echo Park Automotive 500 at Texas Motor Speedway (3 p.m. ET, NBCSN). Precipitation has prevented the race’s full running, with 52 of 334 laps completed on the originally scheduled date of Sunday.