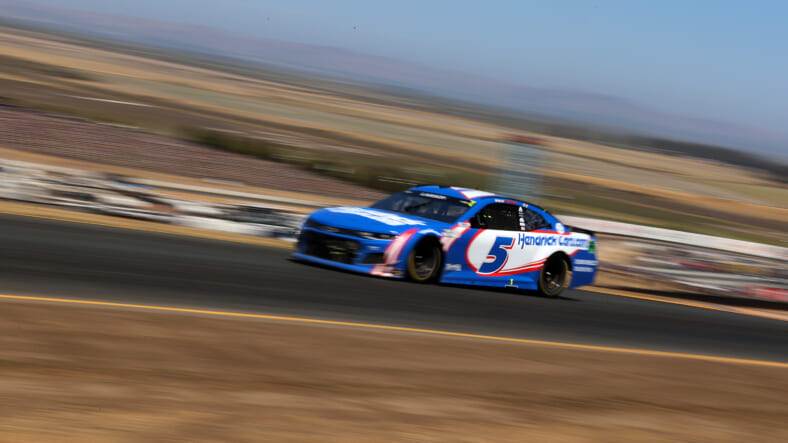 Last weekend at Charlotte, Kyle Larson helped Hendrick Motorsports set the record for most victories for a single team in NASCAR Cup Series history. On Sunday, Larson helped HMS get to work in making sure that they’ll never be caught.

The Cup Series returned to Sonoma Raceway this weekend after a one-year hiatus due to the COVID-19 pandemic. Larson’s No. 5 HMS Chevrolet once again dominated the proceedings, leading 55 of 90 laps at the Toyota/SaveMart 350. Rick Hendrick’s vehicles have now won four consecutive races while Larson joined Martin Truex Jr. as the only three-time winner this season.

Larson sat on the pole for the return to Sonoma, a familiar spot for him at the Wine Country-based road course. He had started first in each of the last three visits to Northern California but led only 11 laps in six previous visits, his best finish being 10th in 2019.

On Sunday, however, the No. 5 was clicking on all cylinders, as the victory was earned through a complete team effort. A rare threat to Larson’s supremacy came with 18 laps to go, when the No. 00 Chevrolet of Quin Houff lost its engine and stalled on the racetrack. When a majority of the lead lap cars visited pit road for tires and fuel, Larson’s crew got him out quickly, setting him up in fifth-place and top car on fresh tires.

“All these wins are team wins,” Larson said of his No. 5 squad. “My relationship with (crew chief Cliff Daniels) and everybody on the No. 5 car is great…This series is so tough that you can easily get knocked back down and be struggling. We just have to continue to work hard. The pit crew has been doing a great job. Cliff and everybody out at the shop on all the cars have been doing great.”

It took Larson only two laps to retake the lead, passing Joey Logano right before another yellow flag for a multi-car get-together. Larson then overcame several other on-track incidents to hold the lead on multiple restarts before holding off teammate and defending series champion Chase Elliott for the win in an overtime finish.

HMS driver William Byron saw his day end in one of those wrecks (his first DNF since Martinsville last November) but Larson continued to carry the torch. With Larson winning and teammate Chase Elliott finishing second, HMS vehicles have also finished in the top two spots in four consecutive races. Such a streak had not been achieved in NASCAR since 1956, when Carl Kiekhaefer’s vehicles pulled it off.

Between Larson, Elliott, Byron, and Alex Bowman, Hendrick Chevrolets have united to win seven of the 16 points races on the Cup Series docket.

“I feel like you have to race each other a little bit differently. You don’t want to run into each other and damage their car or damage yours take out two opportunities for our organization to get a win,” Larson said of racing his teammates for big positions. “It’s been cool to get to race really hard with Chase. William and Alex have been doing a great job this year. To have us all getting wins and battling upfront, all throughout the race, it’s awesome.”

“We all want to see each other do good, so we work really well together. I think we all learn something off of each other each week.”

Martin Truex Jr., the winner of the last two Sonoma visits, finished third, while Logano and Kyle Busch rounded out the top five.

Following the All-Star Race at Texas Motor Speedway next weekend, the Cup Series returns to action on Sunday, June 20 for its maiden voyage at Nashville Superspeedway (3 p.m. ET, NBCSN).