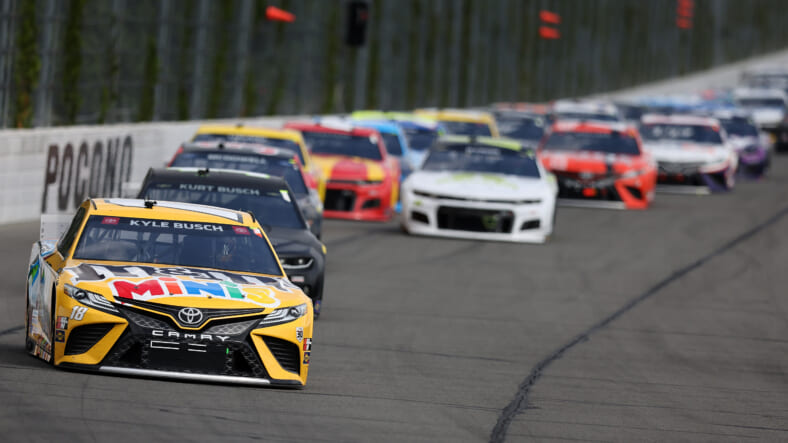 Kyle Busch had just enough fuel to win the second half of the NASCAR Cup Series’ weekend doubleheader at Pocono Raceway.

RETWEET TO CONGRATULATE KYLE BUSCH ON HIS WIN AT POCONO! pic.twitter.com/HrrwjkzZVx

It wasn’t pretty, but Kyle Busch ended Hendrick Motorsports’ monopoly on the NASCAR Cup Series in style on Sunday afternoon at Pocono Raceway.

Busch fought an ill-handling No. 18 Joe Gibbs Racing Toyota and saved just enough fuel in the final stages to win the Explore the Pocono Mountains 350, the latter of a Cup Series weekend doubleheader in Pennsylvania. The win snaps a six-race winning streak for Rick Hendrick’s team, though Kyle Larson, the winner of three of those races, finished in the runner-up spot.

“Even though we were in the back and behind and having to come through and persevere through being stuck in fourth gear, no clutch, all that stuff itâ€™s all burned out…It was awesome today,” Busch told NBC Sports after exiting his car. “Great job to my team. Thanks to (crew chief) Ben Beshore. Thanks to Matt (Tyrrell) the fuel guy for getting it full. Thatâ€™s a big important one today. Really great to take home another checkered flag.

Shortly after the halfway mark of the 140-lap event at the “Tricky Triangle”, Busch’s No. 18 got stuck in fourth gear due to transmission issues. Things became so dire for the JGR team that a crew member had to enter the car during the caution at the end of the second stage in an ultimately futile attempt to fix it. Busch retreated to the rear of the field while at the onset of the third and final stage, the first two won by Martin Truex Jr. and HMS rep William Byron.

The race turned into a fuel mileage struggle after the caution came for Erik Jones’ encounter with the wall at lap 93. Busch joined several others on pit road, seeking to stretch out one final tank of fuel over 47 final laps. The fuel window at the 2.5-mile triangle is often open for 42-45 laps.

Contenders dwindled as they slowly ran out of fuel over the final laps. Byron threatened to keep the HMS streak alive but was forced to pit road with two laps to go. The stage was set for a battle between JGR Toyotas, but Busch’s teammate Denny Hamlin ran dry on the final turn of the penultimate lap. Busch had just enough to finish the 140th circuit and capture the 59th Cup Series victory of his career. That gives him sole possession of ninth place on the all-time Cup Series wins list, breaking a tie with fellow Sunday racer Kevin Harvick.

Brad Keselowski led the most laps on Sunday with 31. He beat out Harvick for third, while Bubba Wallace rounded out the top five. Wallace’s finish is good for the first top-five/ten finish the history of 23XI Racing, the team co-owned by Hamlin and NBA legend Michael Jordan.

The NASCAR Cup Series returns to action on Independence Day, as the circuit makes its first run on the Road America road course in Elkhart Lake, WI since 1956 (2:30 p.m. ET, NBC).