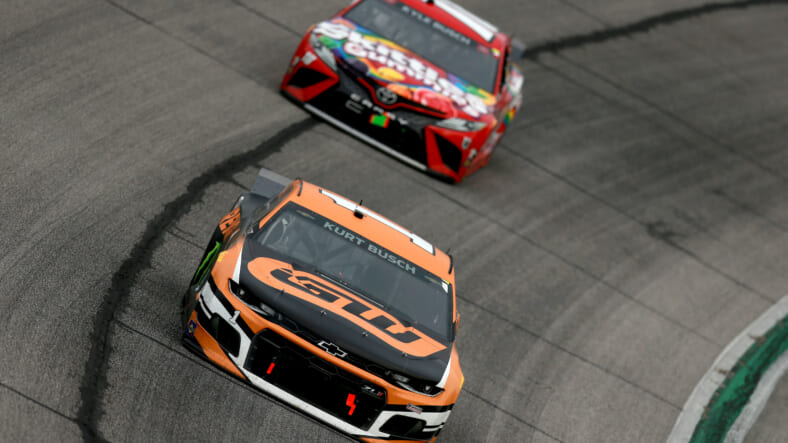 After his team made a major announcement, Kurt Busch held off his younger brother Kyle to earn the 33rd win of his NASCAR Cup Series career.

With Vin Diesel’sÂ Fast and FuriousÂ mantra turned meme embarking on a relentless invasion of social media, it was only appropriate that Sunday’s NASCAR Cup Series affair would take on a familial theme.

Kurt Busch, driver No. 1 Chip Ganassi Racing Chevrolet, held off his younger brother Kyle to win the Quaker State 400 presented by Walmart at Atlanta Motor Speedway. The elder Busch made the fateful pass with just over 23 laps to go in the 260-circuit event to become the 12th different winner of the 2021 Cup Series season.

“We beat Kyle! I taught that kid everything he knows; he should be grateful,” Kurt Busch jokingly remarked, per notes from NASCAR. “What a battle. What a genuine, awesome, old-school racetrack.”

Kurt Busch’s victory comes at a crucial time for his team. All properties of Chip Ganassi Racing, including equipment and characters, were sold to Trackhouse Racing on June 30, a sale that will fully take effect after the 2021 season. Trackhouse is owned by former driver Justin Marks (who previously partook in Ganassi’s defunct Xfinity Series program, winning the 2016 Mid-Ohio event) and philanthropist/recording artist Pitbull, who field the No. 99 Chevrolet driven by Daniel Suarez.

Sunday’s event at Atlanta was thus poetic in more ways than one: Kurt Busch may have had some assistance from teammate Ross Chastain.

As the Busch brothers battled for the lead in the final stanzas, they approached Chastain’s slower No. 42. While Chastain didn’t appear to actively block Kyle, he more or less mimicked his draft, cutting off his access to clean air. Kurt was thus able to get by and build a healthy lead before his brother made one last push to no avail. The final margin of victory was 1.237 seconds.

“He did stop by Victory Lane and do the Kyle Busch grumpy. Thatâ€™s what I expected,” Kurt Busch said of Kyle’s reply. “What happened on track was the perfect scenario for a teammate to do the work that he needed to do. If Iâ€™m running third, Ross isnâ€™t part of the equation. That was exactly what a teammate needs to do, and Ross did that in a way that gave me a sense of pride in the education and the mentorship that I have helped Ross with this year. It was a perfect give-back.”

Chastain, who finished 21st, was among the first to congratulate Busch after he crossed the start/finish line. He’ll likely need a win to join the No. 1 in the Cup Series postseason as he sits 145 points out of the final playoff spot, now held by sixth-place finisher Tyler Reddick.

“Can we do that in the playoffs? No,” Kurt Busch said. “Can you do that in a regular season where one guy has won and one guy is trying to run hard? Today was a perfect scenario for that to unfold, and Kyle will get over it pretty quick.”

“I believe that no line was crossed, and it was that right finesse to make it happen.”

The Busch brothers each took home the victories in the first two 80-lap stages of the race. Kurt, the 2004 Cup Series champion, earned the 33rd win of his career to tie Fireball Roberts for 25th place on the all-time wins list. His return to the playoffs guarantees Ganassi at least one more shot at a NASCAR championship. CGR has earned 18 major racing championships (including nine in IndyCar) but none at the NASCAR level, its closest attempt coming in 2001 with Sterling Marlin (3rd).

Busch’s victory, his first since last September at his home track of Las Vegas and his fourth all-time at AMS (most amongst active drivers), also comes at the final NASCAR event at Atlanta before the track is repaved and reconfigured for next year’s visit. The old surface required repairs shortly after the end of the second stage, necessitating a red flag period that lasted about 20 minutes.

The NASCAR Cup Series returns to action on July 18, as the Foxwoods Resort Casino will be held at New Hampshire Motor Speedway (3 p.m. ET, NBCSN).