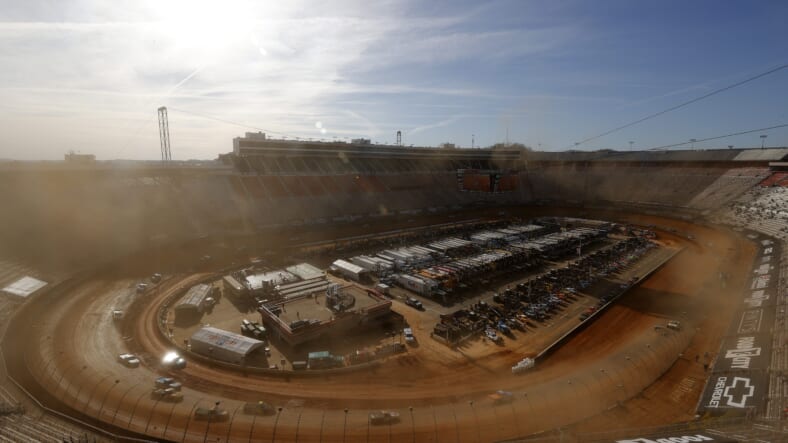 Joey Logano held off off a final push from Denny Hamlin to win the NASCAR Cup Series first race on dirt in over five decades.

Joey Logano came out clean at the end of the first NASCAR Cup Series run on dirt in 51 years.

Bristol’s dirt endeavor, the first NASCAR Cup Series event held on dirt since 1970, was pushed back from Sunday to Monday after inclement weather flooded the parking lot and rendered the track inoperable. Thanks to a strong effort from the BMS crew, both the Cup and Camping World Truck Series were able to run their full events without issues.

Unlike several of his Cup peers, Logano did not run the Trucks race, instead calling the race for Fox Sports 1. Despite limited dirt experience, he was able to stay toward the front for a good portion of the day after starting 10th. He took care of business after the first 100-lap stage through a sixth-place finish while the Truck race winner Martin Truex Jr. dominated.

Logano first took the lead at lap 170 of 250, passing the upstart Suarez in the No. 99 Trackhouse Racing Team Chevrolet. He would go on to beat out Suarez for the stage two win before a ten-minute break commenced. By then, the middle stage of the race had thrown a new obstacle for the drivers: the return of single-file restarts, which hadn’t been seen on the Cup circuit since 2009. Early runs in the second stage were quickly stopped by multi-car get-togethers that damaged the cars of several contenders, including Kyle Busch, Austin Dillon, Chase Briscoe, Alex Bowman, and Ryan Blaney.

With the track moistened for the final 50-lap stage, Logano held the lead despite a strong push from Hamlin in the No. 11 Joe Gibbs Racing Toyota. Mike Marlar’s spin just five laps from the checkered flag set up a two-lap overtime finish, but Logano was able to keep Hamlin and a charging Stenhouse behind him. Stenhouse had worked his No. 47 JTG Daugherty Chevrolet up from eighth over the final 30 laps to secure his fifth career runner-up finish at Bristol.

Logano is the seventh different winner in seven different events to open the 2021 season, the first time the Cup Series has had seven unique winners to start since 2014. The series will go on hiatus during Easter weekend before returning for the Blue-Emu Maximum Pain Relief 500 at Martinsville Speedway on April 10 (7:30 p.m. ET, FS1).