NASCAR: Jimmie Johnson ready for his last dance at Charlotte 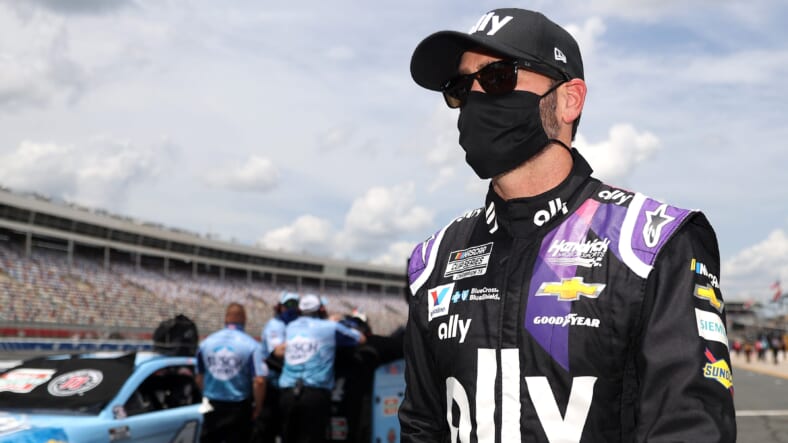 CONCORD, NORTH CAROLINA – MAY 24: Jimmie Johnson, driver of the #48 Ally Patriotic Chevrolet, stands on the grid during qualifying for the NASCAR Cup Series Coca-Cola 600 at Charlotte Motor Speedway on May 24, 2020 in Concord, North Carolina. (Photo by Chris Graythen/Getty Images)

If Johnson is going secure a playoff spot in his final NASCAR season, there’s no better place to clinch than this week’s Charlotte couple.

Unlike, say, Derek Jeter or Mariano Rivera, Jimmie Johnson needs to earn his retirement gifts as he makes his final visit across NASCAR venues across the country.

NASCAR will continue its revival tour on Sunday night at its Charlotte hub (6 p.m. ET, Fox), the first half of a doubleheader to be completed on Wednesday. The opening event is the Coca-Cola 600, a Memorial Day weekend tradition dating back to 1961 and the longest event on the circuit at its titular 600 miles.

Such an event is perhaps the perfect counterargument to the idea of NASCAR not being a sport. A test of skill and endurance, the race features 400 laps around the 1.5-mile track and a runtime that would make Yankees-Red Sox games blush. It’s enough to make even the toughest drivers shake in their boots.

Johnson, however, has spent nearly two decades defying NASCAR norms. His final season of full-time racing isn’t about to change that.

His No. 48 Hendrick Motorsports Chevrolet has been a mainstay atop the Charlotte leaderboards since his 2002 arrival. In terms of mid-2000s dominance, Johnson had a better stranglehold on CMS than USC had on major college football. His name appeared in the top three of eight straight Charlotte races. That includes a streak of four consecutive wins during the pair of visits during the 2004-05 seasons. Most drivers, in comparison, are lucky to get eight total top three finishes throughout the course of their entire careers.

“There is no doubt Iâ€™ll have a flood of emotions when we start our engines these next two races,” Johnson remarked to Jeff Wackerlin of Motor Racing Network. “Iâ€™m going to miss it.”

NASCAR is set to return Charlotte later this fall during the postseason, but that race will come at its “roval” configuration (part-oval, part-road course). Johnson has made a name for himself at the full-on oval with eight wins overall, the most in the track’s history.

Much like the popularity of Von Dutch and Justin Guarini, Johnson’s mid-2000’s dominance has struggled to translate in the decades beyond. His last win in the 600-mile event came in 2014 and he has gone home empty-handed in four straight Charlotte visits. The track is more recently known as the site of one of Johnson’s most heartbreaking moments. With the track in its roval setup for the first time on the Cup Series circuit, Johnson was battling to move forward in the 2018 NASCAR playoffs. Running second behind Martin Truex Jr. in the dying stages, Johnson was relatively secure in points.

It was never like Johnson to be satisfied with second place. Alas, that will and desire cost him nearly on the final laps of the Bank of America Roval 400.

Contract with Truex put them both sideways, and Johnson was forced to partake in the remainder of the playoffs as an on-track observer. It’s been part of an uncharacteristic win drought for Johnson. The No. 48 Chevrolet hasn’t visited victory lane in 101 consecutive events, the last celebration coming in the Dover spring event in 2017. Johnson has 83 Cup Series victories to his name, which ensnares him in a tie for fifth-most all-time with Cale Yarborough.

“Took myself out of a shot at the championship and obviously affected their day which I feel bad about,” Johnson told USA Today’s Michelle R. Martinelli at the time. “I wish I wouldnâ€™t have been so focused on a race win and I could have transferred and kept my championship hopes alive, but we had such a good car and just one of those split-second decisions to race for the win instead of for the points and it bit me.”

Now, it’s all about the win.

Even with the COVID-19 enforced delay, Johnson has spent 2020 making things right and creating an opportunity to go out on the right note. Entering his final week at Charlotte’s 1.5-mile oval incarnation, Johnson sits in 12th place in the Cup Series point standings. Flashes of his former brilliance have been on display in the circuit’s early stanzas. A late crash took him out of contention at the Daytona 500, but Johnson has followed it up with four finishes in the top dozen over the last five races.

The lone exception was the first Darlington event last Sunday. Johnson had the lead at the end of the first stage, but contact with Chris Buescher’s No. 17 Ford put him into the wall and a 38th-place finish. He recovered to finish eighth in the second half of the visit to Darlington later in the week.

“It was a good rebound from a few days before; I wish I could have that weekend back,â€ Johnson said to Jerry Bonkowski of NBC Sports after the race. â€œI really felt like we had things going our way there and could have capitalized. But itâ€™s nice to be back. Good finish in the top-10.â€

The pause of live sporting events causes us to forget that they have a way of using timeliness to create uplifting moments. If Johnson can earn himself a playoff berth by winning at the track he formerly held a monopoly on, it would be perhaps the loudest announcement yet for the return of athletics, as well as a moment the sports-loving public can enjoy as a collective unit.

A win would more than likely put Johnson back into the NASCAR playoffs. If it comes on Sunday, Johnson would tie the legendary Darrel Waltrip for fourth the all-time wins list and at the top of the list of Coca-Cola 600 trophies.Â

Johnson is certainly off to a good start this week at CMS. With NASCAR holding qualifying prior Sunday’s even, the No. 48 Chevrolet posted a time of 29.799, good for a front-row situation. Kurt Busch (29.790) was the only one quicker than Johnson, putting his No. 1 Chevrolet on the pole.