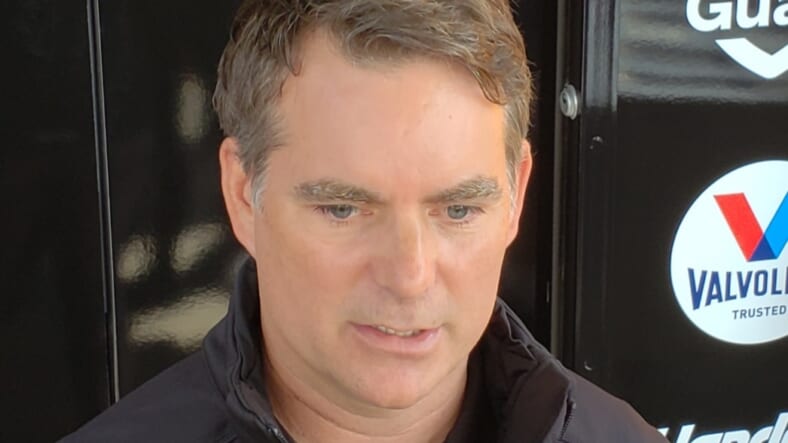 After spending six years as an analyst in FOX Sports’ NASCAR Cup Series booth, Jeff Gordon recently announced that he’s putting down the microphone and headed back to Hendrick Motorsports on a full-time basis. Gordon certainly isn’t getting back in the car, however, he’ll enter a new management role in 2022. Beginning January 1, Gordon will become the new Vice-Chairman of the historic racing organization, a massive promotion from his previous role as a team equity owner.

“I’m excited,” Gordon said at Pocono Raceway in June. “It’s been in discussion for a long time between Rick [Hendrick] and myself, and my presence has been there. It wasn’t a choice about leaving FOX, it was really about the opportunity and timing of moving into this role full-time”.

Gordon will become the No. 2 man in charge at Hendrick Motorsports, only behind team owner Rick Hendrick.

“I’ve been behind the scenes, understanding and learning the business side gradually over time,” Gordon said. “As I started getting closer to stepping away in 2015 from a driving role, my interest level in the business side of the picture that Rick’s created [increased]”.

One of the goals Gordon has in his new role is to continue to build relationships with drivers and staff members at HMS. An example he gave was his relationship with Alex Bowman, a five-time Cup Series winner and driver of the No. 48 machine.

Bowman first signed with Hendrick Motorsports in 2016 on a part-time basis to drive Dale Earnhardt Jr.’s No. 88 car while Earnhardt Jr. was recovering from injuries. Bowman split time with Gordon in the seat over the final 18 races of the season with Bowman getting starts in 10 of those races.

“I can spend all my time nurturing relationships,” Gordon said. “Alex [Bowman] would be one of those guys. He and I did double-duty when Jr. was out, so that was a fun way to know Alex…..It took us a little while to where we can bond, and now that we’ve got him signed up, I look forward to getting even closer to him”.

“There were some really impactful conversations with me last year [with Jeff],” Bowman said following his win in the Pocono Organics CBD 325. “Jeff is super helpful, and he gets it from the organizational side, [and] from a racecar driver side, so that’s been super cool….When I started driving the No. 88 and sharing it with him, I didn’t really know Jeff. Of everybody at Hendrick Motorsports, with him having to wear so many hats and having so much going on, that relationship probably took the longest to build”.

Much like the four Hendrick Motorsports drivers, Bowman’s Crew Chief Greg Ives and other HMS employees are excited to have Gordon back in a full-time role.

“Jeff gave me time to talk [after Nashville],” Ives said. “He was able to give me 20 minutes of his time and give me advice and how to look at some different situations in the future because he’s experienced it. I think it’s a huge impact for Hendrick Motorsports to have that guy who has accomplished so much but also has had a long career”.

Although Gordon said rejoining Hendrick Motorsports in a full-time role was an easy decision, it was tough for him to leave the FOX booth. He mentioned how much he enjoyed working with Mike Joy, Darrell Waltrip, and Larry McReynolds over his six seasons on TV, and how he really enjoyed his time working with Clint Bowyer in 2021.

“The skit that Clint and I did at Daytona was the hardest I’ve laughed in a long time,” Gordon said about his favorite FOX memories. “That all came together in about a week. There was the whole buildup of if we could pull it off, what’s HR going to think, where are we going to get these cars, and what are we going to do with them once we get on track. To see that play off the way that it did was definately one of my favorite moments”.

Gordon’s departure from FOX leaves speculation as to what FOX will do with their on-air talent in 2022. Will the network revert back to a two-man booth like they did in 2020, or will a new driver join Joy and Bowyer come springtime?

Although fans will miss Gordon on TV, his ever-growing presence at Hendrick Motorsports will continue to take the team to growing heights. With four young drivers each in the prime of their careers, HMS will be a force for years to come under the leadership of Jeff Gordon.