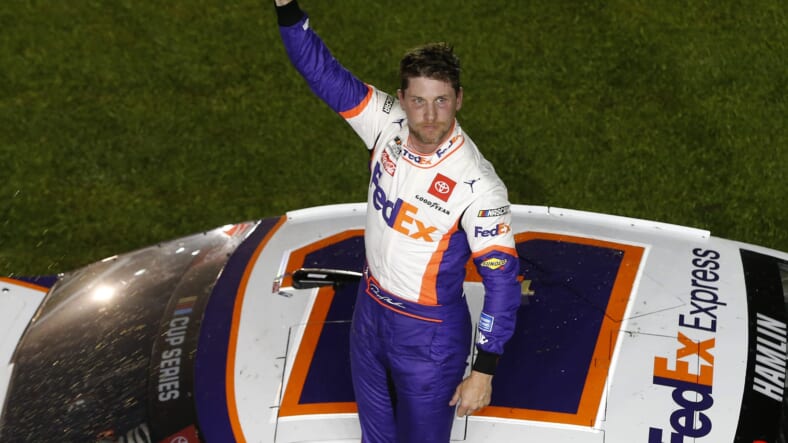 Denny Hamlin completed a bookend of victories in NASCAR’s virtual setup. Afterward, he talked about the circuit’s return to real racing.

Denny Hamlin has accomplished plenty over 16 seasons of FedEx-branded racing in the NASCAR Cup Series. His trophy case holds three Harley J. Earl Trophies (earned by the winner of the Daytona 500), the 2006 Cup Series Rookie of the Year Award, and the laurels from 54 other races over NASCAR’s three national series. He added another victory on Saturday afternoon, winning the North Wilkesboro 160 virtual event on the iRacing platform.

His most cherished racing memory, however, might be a last-place finish.

The moment came when the driver of the No. 11 Joe Gibbs Racing Toyota was competing in an eNASCAR Pro Invitational iRacing Series race at a recreation of Talladega Superspeedway last month. Hamlin’s day was ended by no competitor, but rather someone bearing his name.

His seven-year-old daughter Taylor accidentally turned off Hamlin’s monitor during the race, putting him off the pace and relegating him to a posting of 39th in the event labeled the GEICO 70.

I had so many questions about what just happened.. then we found 2nd hand footage at the end. I cannot believe it. pic.twitter.com/BfN1sNAsg8

Taylor’s gaffe, as well as her father’s exaggerated reaction, immediately went viral. On Saturday, Hamlin declared he wouldn’t have traded the comedic sequence for anything on the track.

“To see Taylor’s shenanigans reaching huge media outlets in L.A., here, everywhere, on TMZ, that’s good,” Hamlin said in a conference call. “Even though I’m (angry) because my day is over, I wouldn’t have traded that moment for anything. I would take that moment and keep it versus winning Talladega.”

“To me, it was just something that I enjoy talking about. Taylor gets such a kick watching it, the highlights and everything that’s been put together about it. It’s just a life moment that, hey, even though we didn’t win, it didn’t turn out well resultsâ€‘wise, it still was a life moment that was really good for both of us.”

The eyes of the nation will turn to NASCAR under more serious circumstances this week. Most North American sports organizations have been mired in “one step forward, two steps back” stagnance as the continent tries to reclaim some semblance of normalcy during the COVID-19 pandemic. NASCAR, on the other hand, has embarked on an ambitious plan to move forward.

Over the next few weeks, the NASCAR Cup Series will descend upon two of its most renowned tracks to restart its engines. The reopening begins on Sunday afternoon at Darlington Raceway in South Carolina (3:30 p.m. ET, Fox).

Myrtle Beach’s Darlington will host a second race next Wednesday night before the circuit holds another pair of races at Charlotte Motor Speedway. Among the latter track’s offerings will be the Coca-Cola 600 on May 24, continuing a Memorial Day weekend tradition dating back to 1961. The race is the longest event (600 miles) on the Cup Series ledger. NASCAR also plans to run races from its lower-tier national circuits, the Xfinity and Gander RV & Outdoors Truck Series, at the tracks as well.

Hamlin knows the series will be watched with great scrutiny as one of the first major leagues to return on the wake of the ongoing situation.

“I have two kids. They run a temperature all the time. It’s a little nervous for me knowing that you could get a fever or something like that, and it maybe will scare you into thinking you have something that you don’t,” Hamlin said. “Obviously, there will be a huge microscope on how we’re doing things, making sure it’s done in a safe manner. For all of us, (there is) just the unknown of making sure we’re doing it the right way.”

The Ultimate Fighting Championship showed just how hard a return can be. While many fans relished the proceedings in Jacksonville on Saturday night (held in an empty VyStar Veterans Memorial Arena), not everything went off without a hitch. Champion fighter Ronaldo Souza and two of his cornermen each tested positive for COVID-19 but the event was able to press on.

While on-track racing will make its return, it’s apparent the events over the next two weeks are the first phase of a full-on welcome back. After all, using Darlington and Charlotte as de facto bases of operation eliminated events at tracks like Sonoma Raceway, Chicagoland Speedway, and Richmond International Raceway.

The races will be run sans spectators and there will also be no qualifying (with the exception of the 600-mile Cup race) or practice sessions. Social distancing protocols will continue to be maintained. Hamlin, in fact, joked that the required six-feet of separation may be perfect for aggressive racing, as the heated confrontations seen after on-track get-togethers may have to be put on hold until the health situation is further under control.

“If there’s ever a time to be aggressive, probably ruffle some feathers, this is probably the time to do it,” Hamlin said with a laugh. “You don’t have to face consequences right after the race.”

Jokes aside, Hamlin’s confidence was a common theme of his call.

Directly declaring that “we’re going to be able to do this and it should be pretty effective”, Hamlin stated that NASCAR is a bit of advantage due to its status as a non-contact sport…at least in terms of bodies and not sheet metal.

“I’m pretty certain that no matter what, we’re in an advantage because we’re a nonâ€‘contact sport, especially with the players themselves,” he said. “I’m confident that we can go from our street car that we drive to the racetrack, into our racecar, not be within six feet of anyone, except for the person that is on the window net.”

Hamlin currently sits 11th in the Cup Series standings with 32 races remaining on the 36-event docket. He’s more or less guaranteed a spot in this fall’s postseason thanks to a win in February’s Daytona 500. Kevin Harvick is the current leader by a single tally over Joey Logano.

The virtual proceedings gave Hamlin a bit of momentum going into the resumption. Saturday’s victory allowed Hamlin to sandwich the Pro Invitational Series with a pair of victories, having also won the opening event at Homestead-Miami Speedway’s recreation back in March.

It should be perhaps no surprise that Hamlin was one of the more successful drivers during the simulations. He had made over 160 starts and had won 30 prior races before iRacing went mainstream.

Virtual races allowed NASCAR to maintain an audience on the networks of Fox Sports during the shutdown of sports. The Food City Showdown at Bristol Motor Speedway on April 5, for example, drew 1.3 million viewers. With team budgets rendered meaningless on iRacing, several new faces breached the top of the leaderboard. For example, Timmy Hill was the de facto “winner” of the Pro Invitational Series, determined to have been leading the points standings had they been kept. Hill is the driver of the No. 66 Toyota for the underfunded MBM Motorsports and has over 1,600 iRacing events under his belt. He finished in the top three (including a runner-up finish at North Wilkesboro) in all but one race.

iRacing also briefly brought some legends of the circuit of retirement. Four-time Cup Series champion and current Fox commentator Jeff Gordon ran the Talladega and North Wilkesboro events, while 2000 Cup champ Bobby Labonte worked as Hamlin’s teammate in a return to Joe Gibbs Racing. Other popular competitors included Dale Earnhardt Jr. and Greg Biffle. North Wilkesboro itself was another blast from the past, given a virtual resurgence after hosting its last NASCAR in 1996.

Hamlin believes the competition during the pixelated races will only up the excitement factor on the track.

“Throughout the entire week, guys are running hundreds and hundreds of laps at these tracks to get better because they want to put on a good showing, they want to be competitive. That’s what drives us to be the racecar drivers that we are in real life, is the fire to want to be better.”

“I take pride in that. Hey, if everything is equal, I’ve won a couple of times, I feel pretty good about where I’m at as a driver. Certainly, I think there’s some confidence that will spill over for a few weeks.”

The real track will look a bit different once we get back underway. Returning to the track will be Ryan Newman, who restarts in Roush Fenway Racing’s No. 6 Ford. Newman was involved in a scary wreck at the end of the aforementioned Daytona 500 but walked away with relatively minor injuries.

Also due for a return is 2003 Cup Series victor Matt Kenseth, but his return comes under less pleasant circumstances. Kenseth will take over Chip Ganassi Racing’s No. 42 Chevrolet after its regular driver, Kyle Larson, was caught using a racial slur during an iRacing streaming event.

Hamlin, a close friend of Larson’s, condemned his comments while mentioning there could be a spot for his return in the future.

“Obviously he put himself in a really bad spot saying something that was totally inappropriate. But, you know, people make mistakes. A lot of people make mistakes. Hopefully, he’s back in Cup racing sooner than later,” he said. “I think if he wants to come back, there is a path for him back. He’s been doing all the right things as far as what I’ve heard.”

But the focus is now on the present, where Hamlin will look to chase down an elusive Cup Series title. He has finished in the top four of the final standings in four separate years, including a fourth-place finish last year.

The championship can wait for now. He’s only looking forward to the first laps at Darlington, as a green flag will signal not only the start of the race, but a potential step forward for a reeling nation looking for any semblance of good news.

“I trust my crew chief and team with Joe Gibbs Racing, we have enough smart people that we feel like this is a place where we can get an advantage,” he said. “Everyone thinks that, with all organizations. Hey, I trust my guys, and I like the unknowns.”