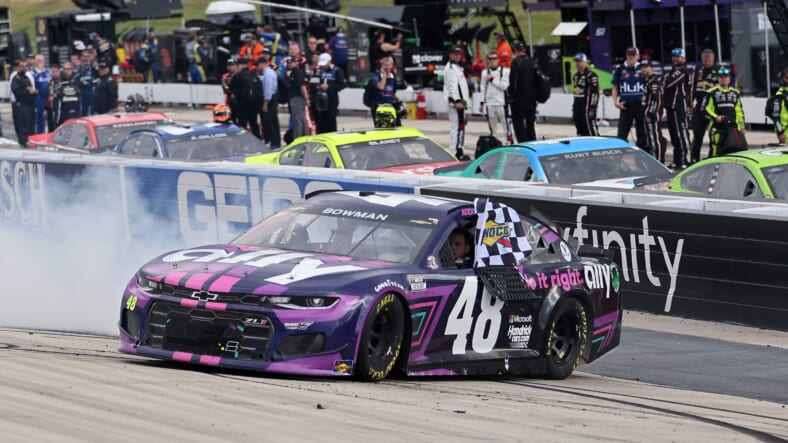 DOVER, DELAWARE - MAY 16: Alex Bowman, driver of the #48 Ally Chevrolet, does a burnout after winning the NASCAR Cup Series Drydene 400 at Dover International Speedway on May 16, 2021 in Dover, Delaware. (Photo by James Gilbert/Getty Images)

No matter how well your weekend’s going, it’s probably nothing compared to what Hendrick Motorsports enjoyed on Sunday afternoon.

A new kind of monster took over Dover International Speedway, best known as the Monster Mile, as HMS Chevrolets led all but 18 of 400 laps of the Drydene 400. It was Alex Bowman’s No. 48 that led the final 97, using fast service on pit road to his advantage en route to his second victory of the season. His teammates completed a clean sweep of the top four, with Kyle Larson, Chase Elliott, and William Byron following him. Larson’s No. 5 led the most laps on the after (258). It marked the first time a single team swept the first four spots in a race since Roush Racing did so at the end of the 2005 season at Homestead-Miami Speedway.

Bowman’s win, the fourth of his career, was also the 267th visit to victory lane for team owner Rick Hendrick. The next will tie Richard Petty for most wins amongst Cup Series owners.

Larson appeared to be well on his way to his own second victory of the season, as only pit cycles interrupted his stranglehold on the lead for a majority of the race. He first took the lead after pit stops during a competition caution at lap 37 and led all but three of the next 267 circuits.

The No. 48 team seized its opportunity after the caution waved for Aric Almirola’s wrecked No. 10 Ford with just under 100 to go. Bowman brought his Chevrolet down pit road for a stop that lasted 12.1776 seconds, the fastest four-tire service in the 2021 season to date. He would go on to lead the final 97 laps to create his first-career multi-win season and set up the Hendrick quartet.

“If we donâ€™t beat the 5 off pit road, we probably donâ€™t beat him in the race. I give (the crew) all the credit for the win there,” Bowman said. “I think without them we wouldnâ€™t have gotten it done. So appreciate (crew chief Greg Ives) and all those guys working so hard throughout the week to continue to get better. Theyâ€™ve been super fast all year.”

With restrictions in place due to the ongoing health crisis slowly being loosened, Bowman was allowed to celebrate the win with his crew in victory lane. The team also won at Richmond last month, becoming one of two drivers to win multiple races in 2021 (the other being three-time winner Martin Truex Jr.)

Winning at Dover resumes an unofficial tradition of sorts for HMS’ No. 48 Chevrolet. The prior occupant, seven-time Cup Series champion Jimmie Johnson, won a career-best 11 races at the mile-long speedway, including a sweep of the two races in his rookie season in 2002. Bowman, previously driving the No. 88 for the team after being handpicked by Hendrick Dale Earnhardt Jr. for the role, was chosen to fill in.

Bowman was happy to not only vindicate Hendrick’s trust in him to fulfill an iconic ride but to win at Dover using tips he gained from Johnson during his first year in the No. 88.

“To come to a place like Dover, where the 48 has had so much success, get a win here, (I’ve) never won here with Mr. Hendrick here, so itâ€™s so cool to be able to do that,” Bowman said. “I feel like throughout my career Iâ€™ve had my fair share of doubters. To be able to get two wins here to start off the season, be having a good start to the year, is really cool.”

Hendrick entered the Cup Series in 1984 and has won 13 Cup Series titles, the last coming with Elliott’s triumph last year. Even though Elliott has yet to win a race in 2021, each Hendrick car would be a playoff participant midway through the 26-race regular season. Byron has been particularly impressive, earning top ten finishes in each of the last 11 events while piloting the No. 24 Chevrolet previously repped by four-time champ Jeff Gordon.

The NASCAR Cup Series returns to action next Sunday, as the series will make its debut at the Circuit of the Americas road course in Austin for the EchoPark Texas Grand Prix (2:30 p.m. ET, FS1).