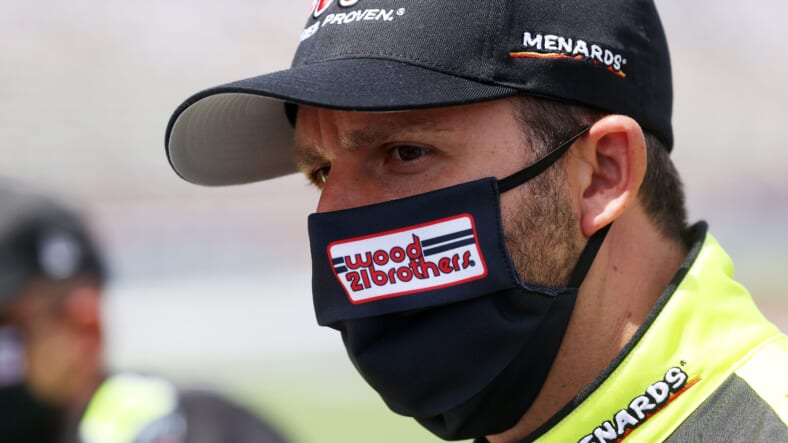 CONCORD, NORTH CAROLINA - MAY 24: Matt DiBenedetto, driver of the #21 Menards/FVP Ford, stands on the grid during qualifying for the NASCAR Cup Series Coca-Cola 600 at Charlotte Motor Speedway on May 24, 2020 in Concord, North Carolina. (Photo by Chris Graythen/Getty Images)

If and when someone gets their first career NASCAR victory during this fan-free period, it’ll come at the price of not being able to “properly” celebrate. The joyful congestion of victory lane has been temporarily erased so the sport’s return can adhere to continuing social distancing guidelines, an isolated atmosphere described by the original winner of the new normal Kevin Harvick as “awkward”. One can only imagine that the feeling would amplify fortyfold if a driver were to earn their first win during this process.

Matt DiBenedetto doesn’t care about that in the slightest. The driver of the No. 21 Wood Brothers Ford just wants a mere visit to victory lane and is quite pleased with NASCAR’s protocols as it’s the first team sport to return in the wake of the current health crisis.

“Iâ€™ve actually been nothing but thoroughly impressed with how smooth everything has gone and how to a T every single person that you see in the garage is following every guideline because weâ€™re all so on the same page and just so appreciative to be racing and willing to do whatever we have to do,” DiBenedetto said in a Zoom media conference call earlier this weekend. “Honestly, itâ€™s gone ten times smoother than I could have possibly imagined and Iâ€™m just really, really proud of the effort of everyone. Itâ€™s amazing to see that big of a group of people all come together like family and be willing to do whatever, no complaining, just everyone happy to be following every guideline to be putting on a show for the fans.â€

DiBenedetto has run 184 NASCAR Cup Series races, a majority of them with microbudget racing squads where merely running at the finish would be equivalent to a win. No wins have followed, but DiBenedetto’s ability to post respectable finishes in subpar equipment, as well as a racing journey that began by swapping his Little League baseball cap for a firesuit, has made him a fan favorite on the circuit.

The Wood Brothers (Leonard and the late Glen) and their iconic No. 21 (previously driven by names like David Pearson, Buddy Baker, Neil Bonnett, Dale Jarrett, and Ryan Blaney) have provided DiBenedetto the most stable car in his career to date. He has followed through on the potential the Woods saw in him. He currently places 11th in the NASCAR points standings and posted a runner-up finish at February’s Pennzoil 400 at Las Vegas. It was the second runner-up finish of his career.

He returns to the site of the first on Sunday afternoon. The NASCAR Cup Series returns to action at Bristol Motor Speedway for the Supermarket Heroes 500 (3:30 p.m. ET, FS1). It will be the first visit to “The Last Great Colosseum” since DiBenedetto finished a most heartbreaking second in last year’s Bass Pro Shops NRA Night Race last August.

Then driving Leavine Family Racing’s No. 95 Toyota, DiBenedetto seem poised to earn that elusive first win as he took the lead with 104 laps to go around the half-mile short track. Such a win also would’ve allowed DiBenedetto to qualify for the NASCAR playoffs, which would’ve been a first.

Alas, contact made with the notoriously hard-to-pass Ryan Newman (whom DiBenedetto was trying to put a lap down) slowed the No. 95, allowing another Toyota, the big-budget machine of Denny Hamlin, to take over the lead with a dozen laps to go. Hamling even jokingly remarked that he was “sorry” that he passed DiBenedetto during his postrace interview with NBC.

That evening, one that produced his career-best finish to date, was a bittersweet affair for DiBenedetto. He mentioned that he hasn’t viewed the film from that monumental race.

“That was probably one of the biggest days for my entire career honestly, so that was a moment Iâ€™ll never forget, having all the support from the fans,” DiBenedetto said. “That was a crazy moment and I really didnâ€™t even know how to feel because it was probably one of the most defeating and toughest days of my life, but also one of the most rewarding from the support we had from the fans and everybody. It was a tough week on us, so there was a lot of not really feeling how to feel, but ultimately it led to being a big factor in me getting this opportunity to drive the 21 car this year, so it was a big day and everything was meant to be.â€

Less than a month after that Bristol event, Wood Brothers Racing announced that DiBenedetto would take over their Ford.

Bristol is a track for developing tempers even hotter than the tires. Known as “Thunder Valley”, the track’s cramped quarters can put you in the wall without warning. DiBenedetto, however, has seen his brightest NASCAR days at the track. He has completed over 99 percent of the maximum laps he could’ve run over ten visits. The stadium also played host to DiBenedetto’s first career top-ten finish, a sixth in the 2016 Food City 500. At the time, he was driving the No. 83 Toyota for BK Racing.

DiBenedetto’s Bristol prowess could come up big on Sunday. To limit events to single-day proceedings, qualifying has been canceled at most of the events since the circuit came back from the coronavirus-induced pause. A random draw for starting position yielded a ninth-place spot in the starting lineup. Practice has likewise been canceled.

“I would say Bristol would probably be more of the nerve-racking ones of firing off with no practice,” he said. “I think at the mile-and-a-halves and some of these places, Darlington is a little treacherous but not too bad. Iâ€™d say the mile-and-a-halves are not too bad. Bristol, thereâ€™s just no margin for error. Itâ€™s really, really fast. Itâ€™s an insanely fast short track. Youâ€™re on edge already even when you have your car dialed in, so Iâ€™d say that one will be a little bit more nerve-racking for the drivers.

“Itâ€™ll be fine. Itâ€™ll work out fine, for sure, but you just really are out and outpraying that your car is dialed in right because itâ€™s very sensitive. If youâ€™re off just a little bit at Bristol, it can affect you worse than these tracks where itâ€™s a big race track, a mile-and-a-half, and you donâ€™t have to worry about going a lap down if you miss it or things like that, so this one will be a little bit more treacherous.â€

The series’ descent on Bristol comes at perhaps the perfect time for DiBenedetto. He has finished in the top 20 in each of the first four races since the return, but those finishes haven’t come easy. When qualifying was held at Charlotte Motor Speedway, DiBenedetto had to go to a backup car when he spun out during his timed run. On Thursday night, the second half of a CMS doubleheader, the No. 21 took the lead on the opening lap but a wreck between Joey Gase and Garret Smithley prevented it from getting into clean air and away from the field. The team wound up settling for a 14th-place finish.

Either way, DiBenedetto is well on his way to posting the best numbers of his career. He holds a 35-point cushion over 17th-place Tyler Reddick in terms of playoff positioning.

But DiBenedetto is confident that his group is capable of more. A 14th-place finish might’ve been cause for celebration in his earlier days, but his current Wood Brothers settings (which includes technical assistance from Penske Racing) have higher expectations…ones DiBenedetto anticipates meeting.

“We do have a little cushion right now, but we as a team have to get a lot better, in my opinion,” he said. “We have a lot of speed. We have great people. Weâ€™re just learning each other and weâ€™ve got to close out these races a little better. Weâ€™ve got, for sure, the car speed and the people to do it, so itâ€™s nice that weâ€™re still sitting there in points when, honestly, weâ€™re a little bit disappointed with some of our end results of these races because we know that we can do a lot better and we will do better moving forward, so I feel good about that part of it.â€