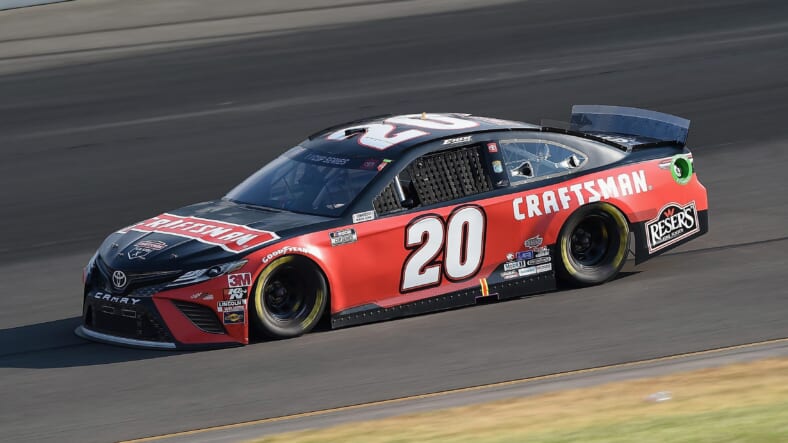 On the cusp of the NASCAR playoff picture and facing an uncertain future, Erik Jones came up big after facing disaster at Pocono.

Summer often affords the opportunity for sports fans to relax and divert their eyes away from the playoff picture and enjoy the games for what they are during the supposed “dog days”, allowing the insanity to fully reign in September.

But with NASCAR racing serving as the only sport in town, fans will take whatever sort of postseason discussion they can get.

Now is as good a time as any to talk about the NASCAR Cup Series’ playoff picture. Against big odds, the series has entered the second half of its 26-race regular season and suddenly only 11 races remain until the postseason begins at Darlington Raceway. Winning more or less assures a driver’s playoff participation, while those who go without must rely on the mercy of points.

Erik Jones, driver of the No. 20 Joe Gibbs Racing Toyota, is currently the 16th and final name on the guest list as the postseason preparty rolls on. After this weekend’s historic Cup Series doubleheader at Pocono Raceway, Jones is up 14 points on Austin Dillon, his closest competitor for the slot. This posting comes after Jones finished a season-best third at the Pocono 350 event on Sunday afternoon.

Jones reflected on his playoff quest during a postrace conference call hosted on Zoom.

“I think we’re so much better than (16th) that it doesn’t really even play into my mindÂ I know if we just kind of do what we need to do, things will kind of work out,” Jones said when asked if he or his No. 20 squad looks at the standings at a time like this. “It’s not really even a question in my mind at this point, making the Playoffs or not.Â Â I feel like we’ll be strong enough here to get a win at a race here in the next month or two somewhere.Â Â I don’t think that’s really in my mind.Â Â We just have a good enough car, a good enough team.Â Â We just got to clean some things up, have some things go our way.Â Â I don’t really believe in luck that much.Â Â You keep chugging along, things will go your way eventually.”

All things considered, it’s actually a solid position for Jones to be in. The weekend began with him on the outside looking in, a mere point behind rookie Tyler Reddick for the final spot. Those who crave playoff drama were no doubt intrigued by an incident that befell Jones, as he ironically crashed with Reddick on the 70th of 130 laps during Saturday’s Pocono Organics 325 in partnership with Rodale Institute. While Reddick was able to muster a 30th-place finish running four laps off the pace, Jones’ Toyota was damaged beyond repair, relegating him to 38th.

When Reddick endured mechanical problems at the start of the second part, a 350-mile event on Sunday, he took full advantage.

His Toyota wasn’t fast enough to run with his teammate, race-winner Denny Hamlin, but Jones kept a wave of decent momentum going with a relative bronze medal at the 2.5-mile track’s 2020 finale. It’s his second top-five finish over the last three races, having managed a fifth-place showing after being involved in the topsy-turvy ending at Talladega.

“I think we’ve been pretty fast every week,” he said. “I can’t think of a race other than Martinsville where we didn’t have good speed. It’s unfortunate we haven’t finished as good as we’ve ran at some races. I think that’s going to come around. You can’t have things go wrong every single week.”

“It was a good day today. The Craftsman Camry was pretty quick. It’s good to get a good finish. …I wish we could get some more finishes. I feel like we’re moving in the right direction.”

Jones is in his third season of Cup Series racing with Gibbs. He’s looking for a third playoff berth that would match his seasons in the No. 20…one that would certainly come in handy during contract negotiations.

The 2015 NASCAR Camping World (now Gander RT & Outdoor) Truck Series champion is slated to be a free agent at the end of the 2020 season. If Jones hits the market, he could get lost in a crowded picture that might also include former series champion Brad Keselowski, as well as fellow playoff participants Alex Bowman and Ryan Blaney. After his second top-five run in the span of a calendar week, Jones expressed confidence that a new deal could be done and he would remain in the No. 20 stable.

“We started talking to them about next year, what we’re going to do moving forward,” Jones reported. “I feel like right now that’s kind of the plan, is working with them. We’ll see what happens. But I feel good about it right now moving forward.”

Jones and the Cup Series stars return to action at the Indianapolis Motor Speedway next Sunday afternoon for the Big Machine Vodka 400 Powered by Florida Georgia Line (4 p.m. ET, NBC). He owns a runner-up finish at IMS, coming home second to Keselowski in the 2018 event.