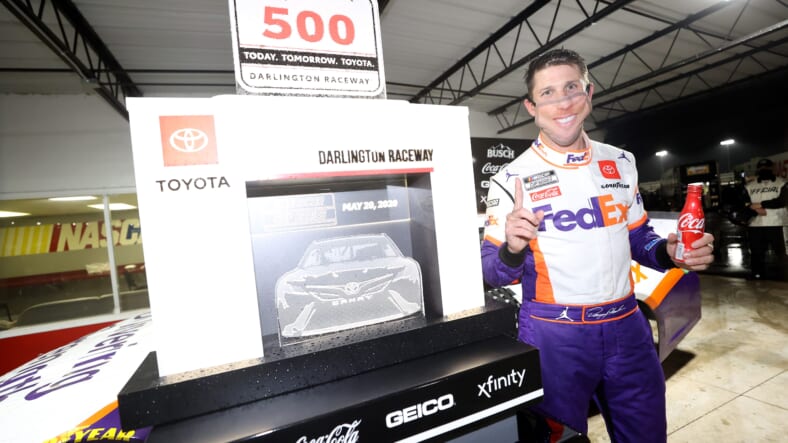 A rare foray into weeknight racing produced fireworks for NASCAR, whose Cup Series event on Wednesday ended in rain and controversy.

The NHL and NBC may have abandoned the concept, but the NASCAR Cup Series apparently ensured that “Wednesday night rivalries” were alive and well in the most recent stage of their return at Darlington Raceway.

Wednesday’s Toyota 500 ended in a literal storm, as Kyle Busch clipped Chase Elliott’s No. 9 Chevrolet with 28 laps to go, sending Elliott’s car into an inside wall. The caution flag emerged, but as the skies opened up after eight laps under the yellow, the active leader Denny Hamlin was awarded the victory. Hamlin’s No. 11 Joe Gibbs Racing Toyota team brings home their second trophy after winning the season-opening Daytona 500 in February.

“I just love the racetrack. Itâ€™s one of my favorites, certainly in my top two or three,” Hamlin said in a postrace conference call hosted on Zoom. “I think itâ€™s a driverâ€™s racetrack. I think the driver can make up a little bit of maybe what his car doesnâ€™t have with moving around the racetrack, different lines, throttle, and brake application. Thereâ€™s a lot of things that a driver can do to make his performance better at this type of racetrack. Thatâ€™s why I like it so much. Really from my very first start here in the Xfinity Series back in 2004, I just took to it quickly. Weâ€™ve had a ton of success ever since. Itâ€™s been a lot of fun.”

Hamlin took the lead from Elliott at lap 197 of the event, which was scheduled to go 228 circuits (500 kilometers at the 1.366-mile egg-shaped track), as one of several drivers who decided to remain on the track after the penultimate caution came out for a Clint Bowyer spin caused by a downed right rear tire. He was one of two cars (the other being the No. 21 of Matt DiBenedetto) that opted to stay out on the track while Elliott, Busch, and the rest of the lead lap cars pitted. Hamlin and DiBenedetto (who wound up finishing ninth) were working with tires that were just younger than ten laps old, pitting under another a prior caution accounting for a Matt Kenseth spin.

When the race got back to green, Hamlin held off a furious to challenge and avoided the carnage behind him. Rain was a constant threat all week (postponing an Xfinity Series race scheduled for Tuesday and delaying the Cup’s start time by two hours) and it finally made itself known with 20 laps to go. The competitors were brought to pit road and Hamlin was awarded the win after a brief attempt to wait the precipitation out.

After he received word of his victory, Hamlin revealed a humorous facemask adorned with the image of his smiling face. He certainly has reasons to be happy after the 39th Cup Series win of his career and his third at Darlington.

“(The mask) covers my face, covers everyoneâ€™s face. Youâ€™re kind of like, you really donâ€™t get any sense of any emotion,” he said. “(I needed) to find someone that can paint me a happy face and a sad face. It depends on how the race finishes. We only had happy masks today, so I guess it was a sign that we didnâ€™t need the sad one.”

Hamlin’s win, however, was overshadowed by the antics between his fellow Joe Gibbs teammate Busch and Elliott of Hendrick Motorsports. After Elliott emerged from his downed machine, he displayed his middle finger to Busch at the latter’s No. 18 Toyota was running his caution laps. Busch was later confronted by the No. 9’s crew chief Alan Gustafson. The longtime Hendrick employee previously served as Busch’s crew chief for three seasons when he drove the No. 5 Chevrolet during his first years at the Cup level (2005-07).

Busch took responsibility for the incident afterward. While he stated that he would reach out to Elliott and denied he spun him out intentionally, he mentioned that the incident was part of a normal racing experience.

“I’ve known him since he was 12 or 13 years old, been racing with him ever since then, late models, super late models, trucks, Xfinity cars, all that sort of stuff. Obviously I just made a mistake, misjudged the gap, sent him into the wall. That was entirely unintentional. Yeah, I mean, Iâ€™ll definitely reach out to him and tell him Iâ€™m sorry, tell him I hate it that it happened. All I can do. That doesnâ€™t change the outcome of the night.”

“I can say whatever I can say. Iâ€™ve never been a very good politician anyways. His fan base is going to have the hatred to me anyways. I just deal with what I got to deal with. Rowdy Nation will have my back and weâ€™ll go after it after that.”

Busch finished in the runner-up spot behind his teammate Hamlin. Kevin Harvick, who won the first half of NASCAR’s Darlington doubleheader in their return from a coronavirus-induced pause on Sunday, finished third, while Brad Keselowski and another JGR driver, Erik Jones, rounded out the top five.

This week’s Darlington doubleheader in Myrtle Beach, South Carolina was the first stage of NASCAR’s return, replacing previously scheduled events at Chicagoland Speedway and Richmond International Raceway. One more event will be run at Darlington this week, as the postponed Xfinity Series race will take place on Thursday (12 p.m. ET, FS1). Cup action returns to Darlington for the Southern 500 on September 6, the first race of the postseason.

The NASCAR Cup Series returns on Sunday in the form of the Memorial Day weekend tradition known as the Coca-Cola 600 at Charlotte Motor Speedway (6 p.m. ET, Fox). Such a race is NASCAR’s longest at 600 miles and will be the first part of a similar doubleheader format enacted at Darlington.