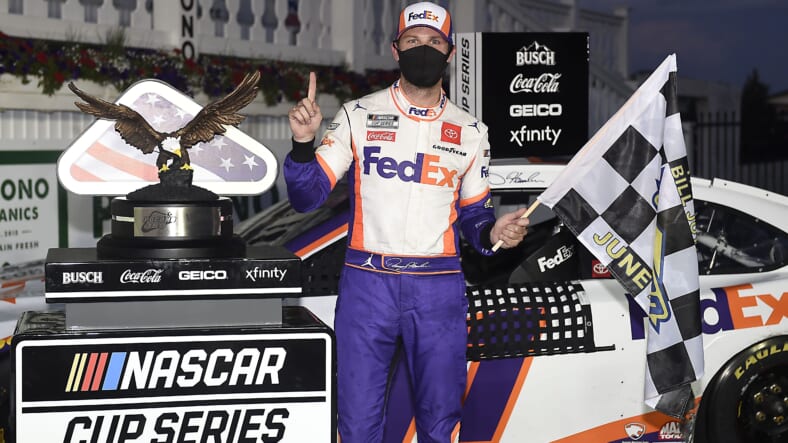 Four hours, a dozen extra laps, and countless wrecks later, Denny Hamlin earned a win at Talladega at the halfway mark of the NASCAR playoffs.

Being forced out of bounds is a conversation more often reserved for another Sunday sport. It came to NASCAR this weekend, but it didn’t change the victorious end result for Denny Hamlin.

In the last of 12 overtime laps at Talladega Superspeedway, Hamlin’s No. 11 Joe Gibbs Racing Toyota appeared to be under the yellow line at the edge of the track’s bottom lane. Advancing one’s position below that line leads to a penalty. However, NASCAR determined that Hamlin was forced down below, leading to a penalty to apparent runner-up Matt DiBenedetto, who was ruled to have forced Hamlin below that line.

As for Hamlin, he moved on to his seventh victory of the season at the YellaWood 500, one that clinched his spot his the next round of the NASCAR Cup Series playoffs. The final stages of his victory saw the No. 11 Toyota navigate its way through several multi-car accidents that have become Talladega’s trademark.

“I hate that’s the way I had to do it. You got to play the game the way it’s designed to be played,” Hamlin said after the race. “We put ourselves in a good position there. Got really fortunate where the wreck didn’t seem like it was going to happen.Â  We were in the 20s I think on the first (overtime).Â  Come in, let’s get fuel just in case there’s more (overtimes). At that point, we were just kind of punting hoping that we were going to get somewhere in the top 15.”

“It just kept wreck after wreck. Made it to where we didn’t have to worry about fuel. Everybody else did. Things worked out for us. We made the right move at the right time.”

“It was pretty clear-cut,” Miller said. “(DiBenedetto) hung a left, drove those guys down below the line.Â Â We called that twice on (Joey Logano) during the race, so nothing different there.”

While runner-up Erik Jones called for eliminating the yellow line rule, Miller stated that such a concept was not being considered.

Hamlin started on the pole and led 24 of the first 26 laps of the race originally scheduled for 188 circuits. By lap 32, he had lost the draft and shifted to the back of the field, mostly content to be a spectator while several big wrecks took out a good portion of the dozen-driver playoff field. Incidents took out Joey Logano, Kyle Busch, Clint Bowyer, and Aric Almirola throughout the course of the afternoon. As Miller mentioned, Logano was penalized twice for going below the line prior to his departure. Kurt Busch was likewise caught up in a wreck but already clinched his spot in the next round by virtue of a win last weekend as Las Vegas. The bottom four drivers after next week’s race will be eliminated from title contention.

The postseason carnage allowed several underdog contenders to fight for the win. DiBenedetto, eliminated from the first round of the postseason, nearly stole his NASCAR victory in his 206th Cup Series start, but was done in by the yellow line rule. In his place, Jones, Hamlin’s current teammate and free-agent-to-be, finished second. Ty Dillon finished third, the best career finish for the No. 13 Germain Racing Chevrolet. That team will be shut down at the end of the season, with their charter set to be sold to a new team organized by Hamlin and NBA legend Michael Jordan. Their debut car will be driven by Bubba Wallace, who led ten laps late in the race before getting involved in a pair of late incidents.

William Byron finished fourth, while Chase Elliott rounded out the top five. The latter was originally also called for a yellow line penalty, but the infraction was later rescinded by NASCAR.

The final segment of the Round of 12 will come at the Bank of America Roval 400, held at the road course at Charlotte Motor Speedway next Sunday afternoon (2:30 p.m. ET, NBC).