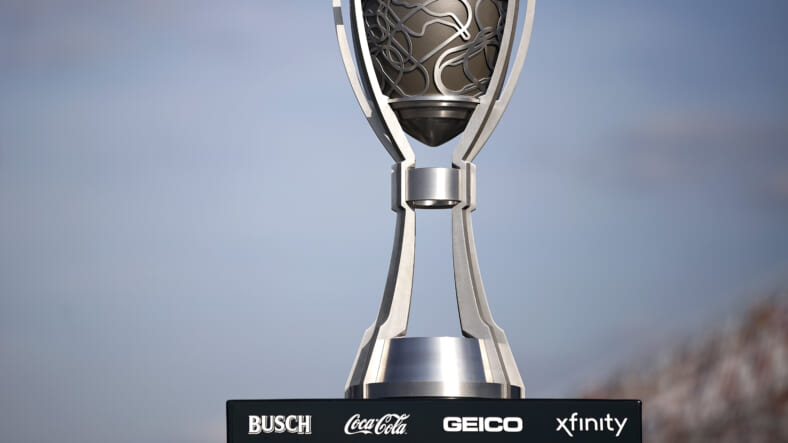 DARLINGTON, SOUTH CAROLINA - SEPTEMBER 05: A detail of the 2021 NASCAR Cup Series Championship trophy on the grid prior to the NASCAR Cup Series Cook Out Southern 500 at Darlington Raceway on September 05, 2021 in Darlington, South Carolina. (Photo by Jared C. Tilton/Getty Images)

Denny Hamlin got the NASCAR Cup Series playoffs off to a strong start, capturing his first win of 2021 as other contenders faltered.

RETWEET to congratulate @DennyHamlin on his #Southern500 win at @TooToughToTame!

What a final corner battle with Kyle Larson! #NASCARPlayoffs pic.twitter.com/JsHuhMAcQm

The Cook Out Southern 500 at Darlington Raceway is no longer considered NASCAR’s “throwback” race, that honor instead being bestowed to the legendary track’s spring event. Sunday night’s winner, however, provided perfect throwback vibes as a victory lane staple finally got to hoist another trophy.

Denny Hamlin, driver of the No. 11 Joe Gibbs Racing Toyota, finally earned his first race of 2021, holding off championship favorite Kyle Larson to win the opening race of the 2021 NASCAR Cup Series playoffs. Hamling stood atop the regular season standings for most of the year, but his lack of victories allowed Larson to take over.

As several other playoff contenders dropped out due to on-track incidents, Hamlin stayed out of trouble and held off a furious last-lap push from Larson to secure the win, his fourth at “The Track Too Tough to Tame”. Hamlin also earned automatic advancement to the second round of the Cup Series playoffs, which began with 16 drivers on Saturday night. The bottom four in the playoff grid will be eliminated after the upcoming race at Bristol on Sept. 18.

Hamlin winning the regular season title seemed like a certainty, as he sat atop the points standings for nearly six months despite failing to visit victory lane. Entering last season’s playoffs, Hamlin and the No. 11 group had won six races before appearing amongst the championship-contending quartet in Phoenix. He maintained general consistency throughout this season (he remains the only driver in the Cup Series that has run and finished all 27 races) but saw his points lead evaporate thanks to Larson’s five victories in his return to the circuit.

The streak finally ended on Sunday night at a familiar locale. He needed no guidance toward victory lane, as he earned his fourth career victory at the legendary Darlington. That breaks a tie with Harvick for the most amongst active drivers and he becomes the eighth driver to win at least four times at a locale that has hosted NASCAR events since 1950.

Hamlin won the first of two 115-lap stages and was running second before some late damage at the end of the latter shuffled him to fourth. The No. 11 crew earned a chance to set up Hamlin for a victory when pole sitter Ryan Blaney’s spin at lap 318 of 367 brought out the caution. Hamlin beat out Chastain for the lead and then secured it for good on the restart.

“We had so many opportunities earlier this year to win races…For us, it certainly is significant,” Hamlin said of his win. “Iâ€™m not going to downplay the significance of it. Itâ€™s not just another win. This one is big for us and our team and the momentum.”

The No. 11 team now has a pair of consequence-free opportunities to tinker with their Camry before the playoff field is sliced down to a dozen.

“We didnâ€™t have the playoff points that certainly we wish we had going into these playoffs,” he continued. “There was no room for error. And now to punch our ticket to the next round, we get to go out there and focus on getting through that second round, which I think is probably the most dangerous.”

Eager to earn another win, Larson gave Hamlin everything he could handle on the final lap. Catching up to the No. 11 by running close to Darlington’s famous wall, eventually getting too close for comfort on the final lap. His No. 5 Hendrick Motorsports Chevrolet crossed the start/finish line in a shower of sparks but managed to finish second.

“We got to the white, and I was like, well, I havenâ€™t been able to gain on him now, Iâ€™m going to try something,” Larson said with a smile, admitting he went for the video game-style finish. “Honestly got to his bumper too quick. I was hoping he was going to run that diamond to kind of be safe and I could skirt to his outside, but gave (him) everything I had.”

Larson nonetheless owns a healthy 80-point lead above the 12th spot occupied by Tyler Reddick and Alex Bowman, a lead built through a series-best five victories and the 15-tally bonus offered to him through winning the regular season title.

Ross Is Boss Amongst the Remainders

Chastain missed out on the Cup Series playoffs but nearly disrupted the postseason party on Sunday night. His No. 42 Chip Ganassi Racing Chevrolet was leading at the time of Blaney’s spin after a strong green flag pit stop situated him in front of Larson with 67 laps to go.

Chastain and his teammate Kurt Busch are looking to send CGR out on a strong note. The team is set to shut down its NASCAR operations at the end of the season, having sold its assets to Trackhouse Racings (where Chastain will drive the No. 1 Chevrolet next season). Busch, the current driver of the No. 1, is seeking his second Cup Series title. He led 13 laps on Sunday and finished sixth to establish a 26-point lead ahead of the cutoff.

“This McDonaldâ€™s car, I think it was the fastest car here tonight,” Chastain said. “Itâ€™s humbling to come with this CGR group these final 10 races here, a place where my career kind of took a totally different trajectory three years ago and to have people like Clover and the Moose (Fraternity) and Advent Health on board supporting me and still letting me race three years later, it means the world. Iâ€™ve just got to clean up some more, though.”

The reigning champ @chaseelliott has slammed the outside wall! #NASCARPlayoffs pic.twitter.com/Ji52UxVWZ1

Darlington lived up to its reputation as The Track Too Tough to Tame, claiming the vehicles of several playoff drivers…

Cody Ware retired from the race early after reportedly showing symptoms of carbon monoxide poisoning. His No. 51 Rick Ware Racing Chevrolet was previously involved in a stage one incident with teammate Davison and spent an extended stay in the infield care center. Ware was in good spirits on Twitter after the race and thanked both the Darlington medical staff and well-wishers.

The second leg of the Cup Series’ opening playoff round comes at the short track at Richmond Raceway, where drivers will compete in the Federated Auto Parts 400 Salute to First Responders (7:30 p.m. ET, NBCSN). This will be the second visit to Richmond this season, as Bowman earned his first victory in the No. 48 Chevrolet, passing Hamlin on a restart with 10 laps to go in securing the victory. Kyle Busch is by far the most accomplished driver at the track, earning six Cup Series wins (his last in September 2018).