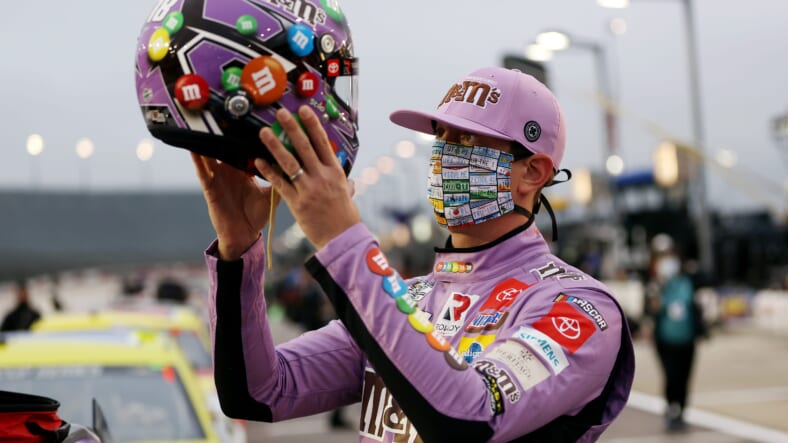 With 32 of 36 races complete on the 2020 NASCAR Cup Series ledger, earning 12 top-five finishes and 17 top-tens is the type of statistical posting a lot of drivers would kill for.

But Kyle Busch has spent his NASCAR career proving that he’s anything but a typical driver. Thus, such an output only brings him disappointment.

The culmination of a disappointing 2020 arose for Busch on Sunday, as he and his No. 18 Joe Gibbs Racing Toyota team were officially eliminated from contending for the Cup Series championship. Sunday’s Bank of America Roval 400 at Charlotte Motor Speedway’s road course trimmed the playoff field from a dozen drivers to eight, and Busch’s 30th-place posting wasn’t enough to allow advancement. Thus, the defending champion Busch headlines the eliminated quartet.

“Itâ€™s just been the year. Nothing has played out and been on our side. Itâ€™s just been unfortunate circumstances, a lot of bad luck,” Busch said after the race in statements provided by Toyota Racing.

With his playoff departure, Busch becomes the first defending champion erased prior to the Round of 8 since elimination rounds were introduced in 2014. Busch will also be reduced to also-ran status at next month’s season finale, where four drivers will contend for the Cup Series title, for the first time since the “Championship 4” concept was introduced that same season.

The label of disappointment is apparent once one takes a closer look at Busch’s NASCAR resume. As one of two drivers with at least 200 victories over NASCAR’s three national levels (the other being Richard Petty), Busch is in danger of going winless at the Cup level for the first time in his full-time endeavors.

Bad luck has defined Busch’s 2020 campaign, as the No. 18 Toyota was often befallen by factors beyond their control. They got caught up in several wrecks they weren’t responsible for while other races saw their vehicle befallen by technical issues. In an example of the former, Busch’s de facto must-win situation in Charlotte was necessitated through an overtime crash that began when the No. 18’s bumper received an overzealous push from rookie Tyler Reddick.Â

Even Busch’s polarizing part-time escapades into the lower-tier Xfinity and Truck Series were haunted. A come-from-behind victory win in his self-owned No. 54 Toyota at the Xfinity Series’ My Bariatric Solutions 300 at Texas Motor Speedway was denied by postrace inspection failure, turning the win over to Austin Cindric instead.Â

Busch let his frustration out in several ways, even when things went well. After advancing to the Round of 12 with a runner-up finish at Bristol last month Busch declared he “(didn’t) care” about the next round because “we’ll be eliminated in the next round”, a comment he later labeled as “tongue-in-cheek”. After Sunday, Busch appeared to have some form of acceptance about his elimination, acknowledging that a strong year for some was disappointing in his realm. He nonetheless expressed appreciation for the efforts of his No. 18 team, one that has guided him to all but four of his 56 Cup Series wins (good for eighth all-time) and each of his Cup titles (2015, 2019).

“Itâ€™s been a terrible year for me,” Busch admitted. “As other sports greats would say, thereâ€™s many other drivers that would love to have a year that weâ€™re having, but itâ€™s just frustrating to know how good we are and what weâ€™re capable of and being champions from last year to not come out here and be able to succeed and be able to win.”

“These guys on this M&Mâ€™s Camry team never give up and they fight all year long and every race and every lap, every pit stop as we can see. Man, just one of (those) off years.”

Busch pulled out all the stops in an attempt to earn an elusive win on Sunday at Charlotte’s Roval (half-oval, half-road course). Contact with fellow playoff contender Clint Bowyer cost him a tire on lap 43 of 109, forcing him to pit road under the green flag. He and his crew were able to limit the damage done and Busch wound up taking the lead with 19 to go, when he and four other lead-lap cars stayed on the track during a caution period initiated by the stalled car of Brennan Poole.

Unfortunately for Busch, he was unable to hang on to the lead, passed by his JGR teammate Erik Jones shortly after the restart. Dwindling fuel later forced Busch to pit road on the penultimate lap as road course king Chase Elliott coasted to victory, relegated him toward the back of the lead lap finishers.

Busch opted to look at the positives in defeat, pleased that he was able to improve at the Roval. Sunday marked the first time in three tries that the No. 18 was running at the finish. A late crash took him out of contention at the inaugural visit in 2018 while suspension issues took him out early in a speedbump to his championship a year later.

“We probably would have been third or fourth or somewhere in there. (Elliott) was stellar. They have the best car here,” Busch said. “We got closer this year than we were last year for as fast off as we were last year, I felt like this was at least a decent run or a better run for us. Still have a lot of work to do to try to get better. Iâ€™m not sure what it is, but we lack a lot of drive off the corners.”

Busch still has a little something to fight for, as four races remain for him to extend his streak of years with at least one win. He has earned at least one victory since joining the Cup Series full-time with Hendrick Motorsports in 2005. Busch admitted he doesn’t feel like he has a shot, but he’s ready to accept the challenge moving forward.

“It’s very important,” he said of the streak. “There’s certainly been times this year where I’ve been like ‘man, there’s something wrong with me, I’m not doing it right, I don’t know what I’m doing, or the car’s not quite right, I’m not trusting what the car’s really doing or telling me, so I should just drive it harder’…certainly it would be nice to score a win, and to have a win this year, that would be the only consolation prize with how this year has gone.”

The next opportunity for Busch to extend his streak comes next Sunday at Kansas Speedway’s Hollywood Casino 400 (2:30 p.m. ET, NBC). His older brother Kurt, having advanced through a win at Las Vegas Motor Speedway’s South Point 400, will be among those racing in the Round of 8, driving the No. 1 Chip Ganassi Racing Chevrolet.