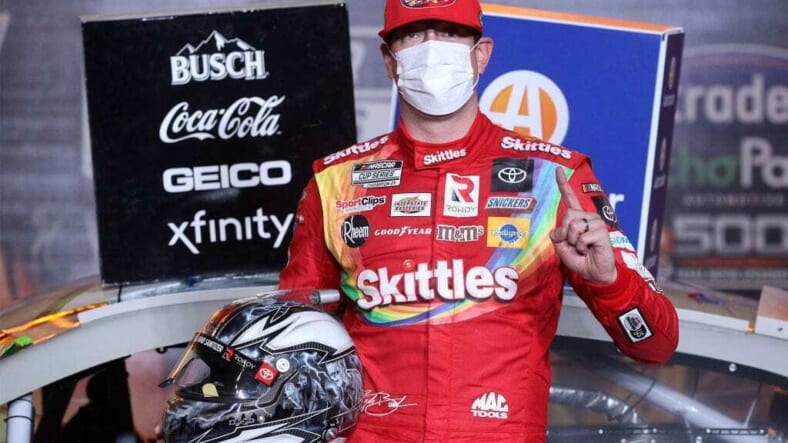 Defending NASCAR Cup Series champion Kyle Busch had to wait for his first 2020 win in more ways than one this season.

With inclement weather pushing a majority of the Autotrader EchoPark Automotive 500 from Sunday to Wednesday, Busch visited victory lane for the first time this season at Texas Motor Speedway. The No. 18 Joe Gibbs Racing Toyota led a race-high 90 laps en route to victory, including the final 24.

Busch is the defending champion of the premier Cup Series, but has struggled through the defense campaign. The No. 18 was eliminated in the Round of 12 in the playoffs and several prior attempts at a victory were ended by on-track calamities, often through no fault of his own. But a season of heartbreak finally found relief on Wednesday evening.

With the win, Busch has now won at least one Cup Series race in each of the last 16 seasons.

“It was obviously much needed and very much a lot of relief, as well, too,” Busch said in a postrace Zoom session. “For me, having the opportunity to continue that win streak was certainly high on our list, and when you fall out of the playoffs and you’ve got nothing else to race for, that’s all you have to race for is trophies and getting wins for the rest of this year, and it feels really good to be able to come here to Texas and score that win.”

The first 52 of 334 laps of the event were run on its originally scheduled Sunday date before rains and mists took over the track. More 2020-induced chaos awaited Busch, as he was caught speeding on pit road during a caution period induced by JJ Yeley’s crash on lap 22. Busch would work his way up to 12th by the end of the first of two 105-circuit stages, but he moved up four spots after taking only two tires on the ensuing pit stops. He lingered behind various leaders, primarily Clint Bowyer and JGR teammate Martin Truex Jr., before taking the lead at lap 199 when the latter ran out of fuel from the lead. With green flag stops cycling, Busch was able to pit and win the second stage.

During the ensuing pause, a majority of lead-lap cars came back to pit road to top off on fuel for the final run. Busch and Bowyer stayed out and engaged in a battle for the lead until they had to make their own visits to top off.

Bowyer faded from contention when his car failed to get the proper amount of fuel in it, putting Busch in control to take advantage. He would hold off one final charge from Truex and Christopher Bell to earn the 57th win of his Cup Series career. Ryan Blaney and Alex Bowman rounded out the top five.

Busch praised the strategy set forth by crew chief Adam Stevens, who was constantly in Busch’s ear over the final segments, asking him to save fuel.

“We can do it under any situation,” Busch said of his relationship with Stevens. “We can do it under pressure situations of racing for a championship and winning the final races at Homestead and bringing home two championships there, we can do it in the Coke 600, we can do it here when we’re knocked out of the playoffs and people would say that we’ve got nothing to race for, but we come out here and we’re able to win. There’s all kinds of different circumstances and different opportunities for us, and I’d like to think that we can be successful for a long time.”

The runner-up finish was bittersweet for playoff contender Truex, whose No. 19 Toyota team endured a rollercoaster weekend. A spoiler issue removed 20 points from Truex’s spot in the standings. Further punishment included the suspension of crew chief James Small and being forced to start from the rear of the field. But Truex made his way into the top five by the time the weather arrived and was able to hold off Bell for second place. The third-place rookie is running his final races in Leavine Family Racing’s No. 95 Toyota, which is set to shut its doors, before he joins JGR next season.

Despite the runner-up finish, Truex is currently 36 points behind Brad Keselowski (6th) for the last of four spots for championship contention at the season finale in Phoenix on November 8. Joey Logano (10th) clinched his spot with a win at Kansas Speedway last weekend. Truex, or any of the remaining six drivers who have yet to clinch, can earn an automatic invite with a win at Martinsville Speedway next weekend.

“I feel (bad). The 19 needed to win a race, obviously, in order to move on and punch their ticket to the Championship Round, and I’m that guy that spoils it for them, and that was one of their best mile-and-a-half runs that they’ve had this year,” Busch said with a smile. “I’m thinking of that as we’re coming down to the finish, too, but I’m like, I’ve got to win, man. There’s obviously no team orders and we do things straight up and as fast as we can be, we’ve got to be. Obviously, it (stinks) for them, (but) I did think, too, that they can be really good at Martinsville, so hopefully, they can go out there and do well, maybe win again.Â Â I’d like to win Martinsville. It would really (stink) again if he finishes second to me, but that would be 2020, wouldn’t it?”