NASCAR Cup Series: Your guide and tracker to new rides in 2021 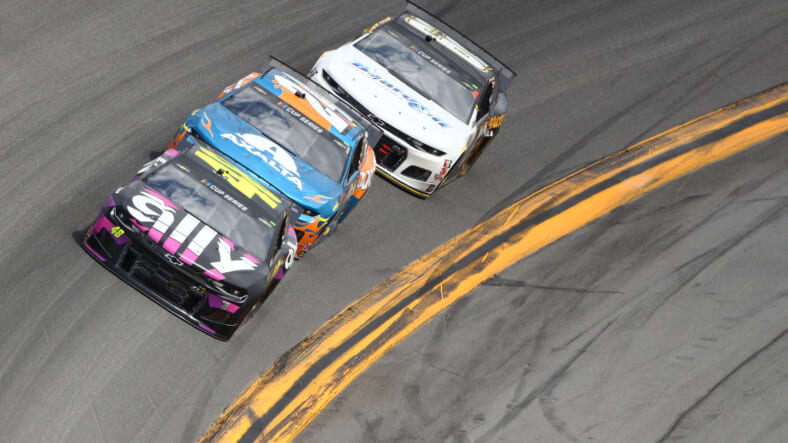 When it comes to Silly Season, ESM has you covered with this updating list of offseason ride exchanges at the Cup Series level.

No. 5 Hendrick Motorsports Chevrolet (formerly No. 88)

Larson returns to NASCAR after his ousting from Chip Ganassi Racing over his use of a racist slur earlier this spring during an event on the iRacing platform. His efforts to rehabilitate since the incident were enough to satisfy both NASCAR (who will lift his indefinite suspension on January 1) and team owner Rick Hendrick, who has resurrected the No. 5 branding last used by Kasey Kahne in 2017. Previous occupants of the HMS No. 5 include Mark Martin, Kyle Busch, and Terry Labonte, who won the 1996 Cup Series championship in the car. The No. 88 identity will be retired after 13 seasons, it’s tenure represented by Bowman and Dale Earnhardt Jr. Larson won six races over six full seasons at Ganassi, the most recent coming in 2019’s fall event at Dover.

Having purchased Leavine Family Racing’s assets, the low-budget Spire is hoping to take a big step forward by adding a second car to their stable (also fielding the No. 77, whose full-season plans will be announced at a later date). The new driver will be LaJoie, who spent the past two seasons in GoFas Racing’s No. 32 (which will now run as a part-time team), earning three top-ten finishes.

The midbudget team from Bob Germain had been racing at the Cup Series level since 2008. Success in the Cup Series proved elusive, but the team earned a pair of Truck Series titles with Todd Bodine behind the wheel (2006, 2010). The team was forced to shut down when longtime sponsorship partner GEICO opted not to renew their deal (though they will remain a NASCAR partner), shutting down the No. 13 machine. Dillon’s future remains uncertain, as he hopes to continue racing at the Cup level but would be open to a return to the Xfinity Series.

Bowyer’s retirement and subsequent transfer to the Fox Sports booth opened the door for Briscoe, who won 11 races at the Xfinity Series level (including a series-best nine this past season). It’s a dream come true for a Tony Stewart fan like Briscoe as he will occupy the car in which team owner Stewart won his third and final Cup title in 2011. Bowyer had operated the No. 14 car for four seasons, reaching the playoffs in each of the final three.

After starring for Gibbs at the Xfinity level (15 wins over two full seasons), it seemed inevitable that Bell would be racing for the Super Bowl-winning coach at the Cup level sooner or later. He got his feet wet in the premier series with his rookie campaign at the smaller, Gibbs-affiliated Leavine Family Racing, posting respectable results (16 finishes in the top 20, first top 20 standings finish for LFR). Jones failed to live up to the reputation pushed ahead by No. 20 predecessors Stewart and Joey Logano, missing out on the playoffs entirely this season.

All eyes will be on this new endeavor from Wallace, Michael Jordan, and Denny Hamlin. The debut vehicle will bear the famous numerals that Jordan wore during a majority of his NBA days. Championship figures from other sports have entered into NASCAR endeavors before and there have been more misses than hits. For every Joe Gibbs Racing, there are multiple Hall of Fame Racings (headed by former Dallas Cowboys champions Troy Aikman and Roger Staubach). But Jordan’s acumen and resources…not to mention Wallace’s skills that were quite respectable for his equipment over at Richard Petty Motorsports…should certainly set this team apart from other start-ups. The team has secured a charter from the aforementioned Germain.

Kenseth was never meant to be a permanent solution in the No. 42 after Larson’s firing, and that was confirmed with Kenseth more or less announcing a third retirement, calling his full-time racing days “over” earlier this week. Chastain was a strong, veteran solution with strong postings with equipment that wasn’t always the best at both the Xfinity and Truck levels. He made a three-race cameo in Ganassi’s Xfinity program (ironically also driving a car number 42) back in 2018, winning a visit to Las Vegas.

Jones will take over the seat that Wallace left behind at RPM. Despite being dealt his walking papers from Gibbs, Jones, the 2015 Truck Series champion, managing to score four finishes in the top five over the ten playoff races. He has two wins at the Cup level, the last being the 2019 Darlington race. RPM is seeking their first win since 2014, when Aric Almirola drove the iconic No. 43 to victory lane.

For months, the 2021 status of the iconic No. 48 was in question with the retirement of seven-time Cup champion Johnson looming large over the entire season. Hendrick went in-house for the succession, calling up Bowman, the former bearer of the No. 88. Bowman made a strong case to take over Johnson’s seat with his strongest season to date. He finished a career-best sixth in the final standings and finished no worse than 16th over the final dozen races of the year, a stretch that included nine postings in the top ten.

McLeod will serve as the has entered into a new team endeavor with Matt Tifft, who returns to NASCAR after a seizure indefinitely ended his racing career in 2018. The team has obtained its charger from Go Fas Racing, whose No. 32 will be reduced to a part-time schedule next year. McLeod has run his vehicles at several NASCAR levels since 2016.

IN: Team folding
OUT: Christopher Bell

A technical alliance with Joe Gibbs and a strong performance from Bell (his 20th-place in the standings being the best in team history) wasn’t enough to save LFR. Previous drivers of the No. 95 include Kasey Kahne and Matt DiBenedetto. LFR’s assets have since been sold to Spire Motorsports, which is seeing an expanded role in the Cup for 2021 (their full plans have yet to be announced).

IN: Daniel Suarez
OUT: New Team

Suarez, the 2016 Xfinity Series champion and formerly of both Gibbs and Stewart-Haas, joins with this new team after a year with the No. 96 of Gaunt Brothers Racing (whose 2021 plans have yet to be revealed). The endeavor is headed by former road course ringer and current racing businessman Josh Wise and former Dale Earnhardt Inc. executive Ty Norris.