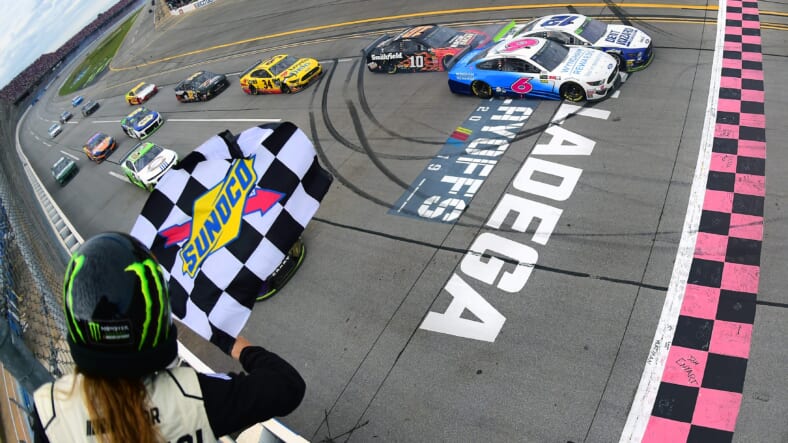 The NASCAR Cup Series prepares to take a chaotic trip to Talladega Superspeedway, as the playoffs hit their midway mark.

This weekend, the hardest postseason hits in Alabama may come not in Tuscaloosa, but Talladega.

The NASCAR Cup Series playoffs hit their midway mark in both their second stage and overall, as Talladega hosts the YellaWood 500 on Sunday afternoon. With its propensity for tightly-packed racing, wrecks capable of taking out more than half the field, and surprise winners, one lap has the potential to repaint the entire playoff picture.

“The playoff race in Talladega is pretty wild because you have probably two-thirds of the field has been eliminated thatâ€™s really not racing for much except trying to win and you have some other ones that are going to be fighting tooth and nail for stage points,” Denny Hamlin said in a prerace teleconference earlier this week. “I suspect it’ll be pretty wild again, but Iâ€™m confident that all of our cars are good enough to win every time we go there.”

By virtue of his win last weekend at Las Vegas, Kurt Busch is the long participant amongst the dozen playoff drivers remaining to have clinched his spot in the Round of 8.

Talladega is the longest track on the NASCAR circuit, and one of the most chaotic. Speeds often near or exceed 200 miles per hour, though restrictor plates and tapered spaces in the car have made efforts to restrict airflow and allow more horsepower. The latter effort of tapered spaces was introduced at the most recent Talladega event, the GEICO 500 back in June. Such a setup creates tightly-packed racing and little wiggle room, though this does notably level the playing field and expand the list of potential winners. It also prevents cars from breaking away from the rest of the pack.

The most renowned feature of Talladega is “The Big One”, the name given to the massive crash that packed racing can produce. It can eliminate half the field and alter playoff destinies. Twelve drivers have earned their first win at Talladega, including Raphael Lessard, who earned a victory in Saturday afternoon’s Gander RV & Outdoor Truck Series race. 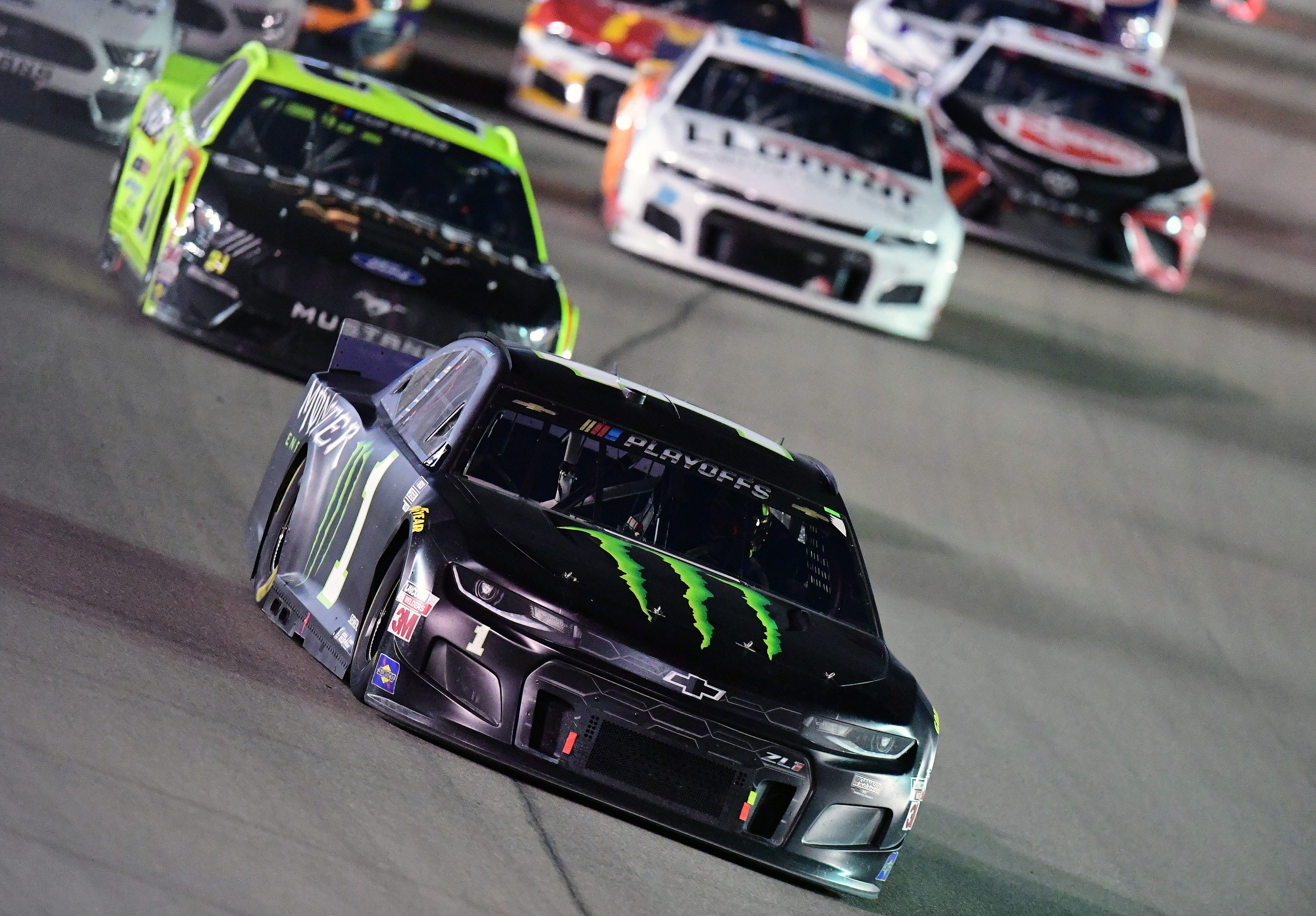 “The pressure is off. There’s not going to be any consequences for the next two weeks. But still, we want to gain points. We want to put some points in our pocket from the stages and the finish at Talladega and the Roval just to build up towards the season end. That’s how we’re going to make it to the Championship 4 is to still keep putting the pressure on, but we know we can slip up, or as Mark Martin said, you can stub your toe every now and then but you’ve just got to learn from it.”–Kurt Busch on how he’s approaching the next two weeks

“It’s the best-case scenario driving the No. 21 car, having the fast Fords under us to go there, and not only that, the big thing is having our Penske teammates. Brad, Joey, and Ryan are incredible plate racers and obviously our cars, the Fords are fast, and having all the Fords on the racetrack. Great situation, and we’ll be aware of everyone else’s situations, too, but as I said before, it’s a fun situation: go out there and we’re just trying to win races and have some fun and rack up points.”–Eliminated playoff driver Matt DiBenedetto racing with Team Penske drivers

Dillon is starting last amongst the playoff drivers, though one can work their way up through the field at Talladega. He and his team would certainly know a thing or two about winning that way. 20 years prior, Dillon’s predecessor in the No. 3, the late, great Dale Earnhardt, earned a win by going from 18th to the front of the field over the final six laps of the 2000 Winston 500. Tragically, it wound up being the 76th and final win of his NASCAR Cup Series career before his death at the Daytona 500 four months later.

“Seeing him come from the back to the front and make the moves he made, he was known as a speedway racer and the things he could do in the draft. I think that was amazing,” Dillon said this week. “Obviously, thereâ€™s a lot of history there. Thatâ€™s 20 years ago and I think that would be fitting for us to go win at Talladega and lock ourselves into the next round of the Playoffs…Things are lining up and weâ€™ll try to make it happen.â€

Dillon’s performance in the opening round of 16 drivers (2nd, 4th, and 12th over the three-race stretch) surprised many, but his Round of 12 got off to a tough start with a lost belt relegating him to a 32nd-place finish at Richmond last week. Considering he’s 32 points behind the cutoff to the next round, a win at Talladega might be his best chance to move on. 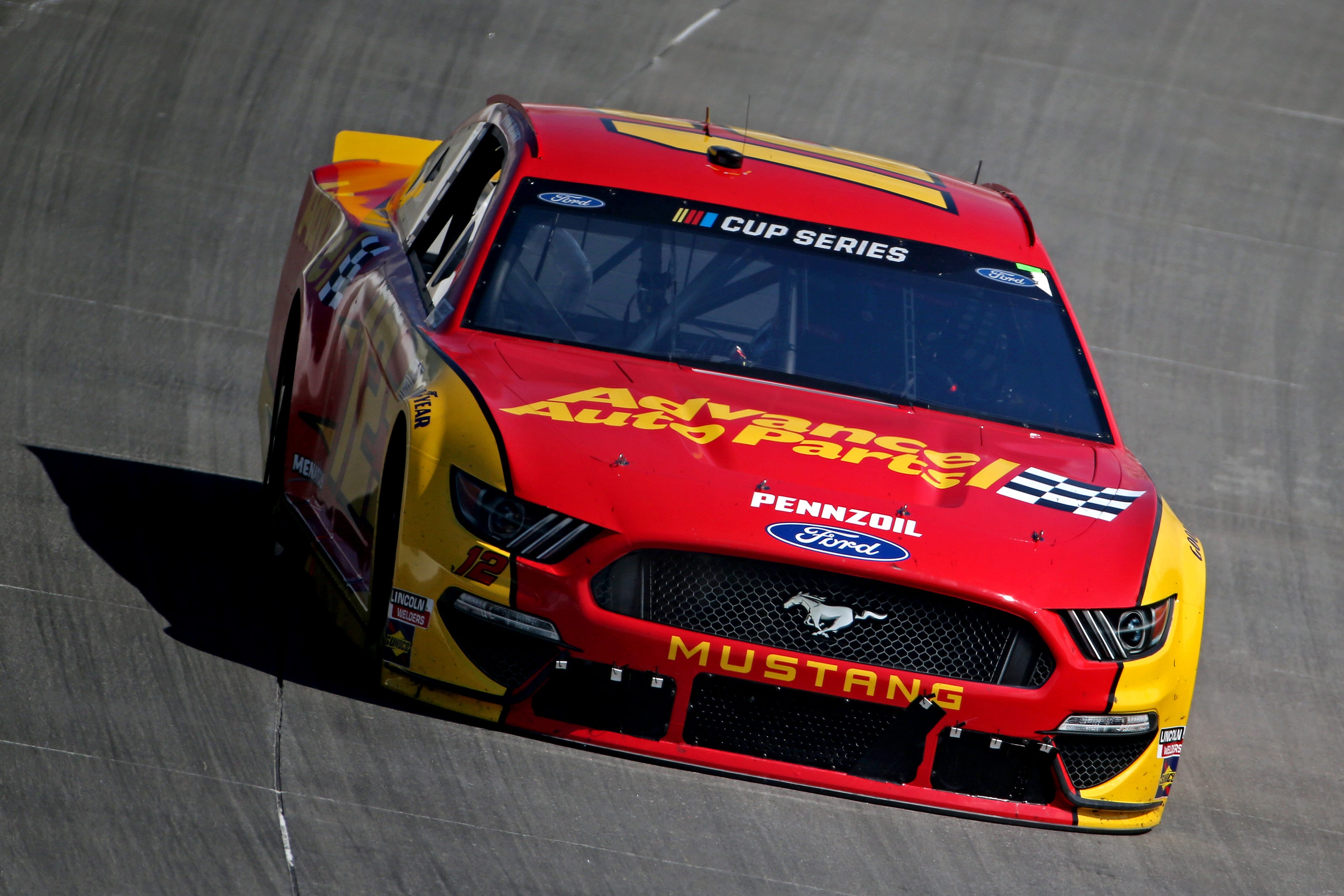 A brutal opening round ended Blaney’s championship hopes before they could truly get started. His struggles might go as far back as the immediate aftermath of his only victory of 2020, a narrow .007-second victory over Ricky Stenhouse Jr. back at the June event. Since then, Blaney has earned only five top-ten finishes, including a seventh-place posting at Las Vegas last weekend.

Blaney’s elimination, however, offers him a bittersweet silver lining that allows him to go all-out at Talladega, where he has won consecutive races. The first half of that victorious couple came last fall, ironically also by a .007-second margin, holding off Ryan Newman to earn his Round of 8 seed. He became the first driver since Jeff Gordon in 2007 to earn consecutive victories at Talladega. He has a long way to go to catch up to Earnhardt, and another win would make him the first to win three in a row since Dale Earnhardt Jr. took home a quartet between 2001 and 2003. Armed with the power of consequence-free racing, Blaney could be ready to join an even more prestigious group.

Gaughan has a brand of immunity even more important than Blaney’s…Sunday will mark his final NASCAR start.

The retiring 45-year-old was a full-time driver on the Cup Series circuit for only one season (racing a No. 77 Dodge partially funded by Roger Penske in 2005), his eccentric personality and friendly demeanor made him a favorite amongst fans. Gaughan has earned 10 wins on the Xfinity and Truck Series levels and has won championships on off-road circuits and what is now ARCA Menards Series West.

With the assistance of Beard Motorsports, Gaughan has made brief cameos at the Cup Series by running every race at Daytona and Talladega since 2017. He nearly stole last season’s fall event, but The Big One struck with less than 10 laps to go, flipping his No. 62 airborne and pushing him back to 27th. There’d be no better way to say goodbye than a visit to victory lane.