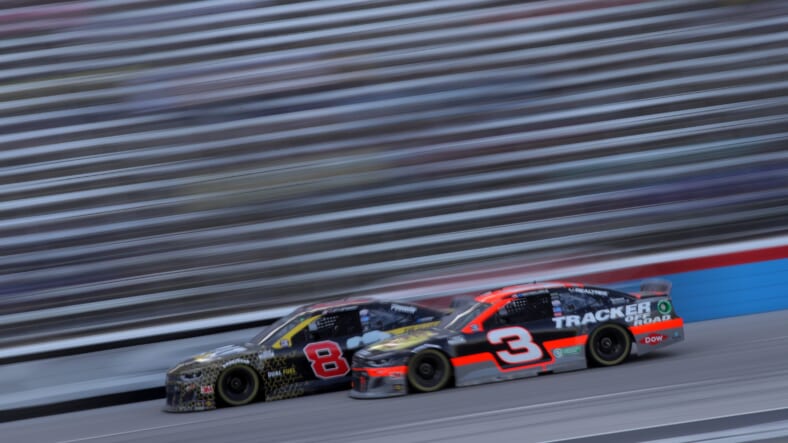 Reenergized after the No. 3 returned to victory lane, RCR is looking to get both of its cars into the NASCAR Cup Series playoffs.

RCR is best known for running the No. 3 Chevrolet, which Childress himself ran for a majority of his own full-time driving career (1973-81). The numeral was made legendary by Dale Earnhardt, who drove it to 67 victories and six of his record seven NASCAR Cup Series titles (1986-87, 1990-91, 1993-94). It was retired after Earnhardt’s tragic passing after a wreck on the final lap of the 2001 Daytona 500 but it returned to the Cup level when Childress’ grandson Austin Dillon began his own full-time endeavors in 2014. Kevin Harvick drove the car, under No. 29 branding, for 13 seasons before departing for Stewart-Haas Racing in 2014.

Childress opened a second full-time vehicle in 1997, with the current No. 8 Chevrolet running under previous identities of Nos. 30, 07, and 27. Notable names to pass through each respective incarnation include Jeff Burton, Clint Bowyer, and Paul Menard.

The 2019 Cup Series season had been a struggle for RCR, as the team failed to put a car in the top 20 in points for the first time in its full-time racing days, a streak dating back to 1976. Reddick, the winner of back-to-back NASCAR Xfinity Series championships, took over the No. 8 from Daniel Hemric while Dillion was reunited with crew chief Justin Alexander. The latter pair previously united for a last-lap victory at the 2018 Daytona 500, the No. 3’s first victory in the Great American Race since Earnhardt captured a long-sought-after triumph in the 1998 edition.

Their reunion paid big dividends. Dillon earned one of the best seasons of his career and ended an 88-race win drought at the O’Reilly Auto Parts at Texas in July. The win secured his spot in the postseason, which came up big when he was forced to skip August’s Daytona road course event due to a positive COVID-19 test (Kaz Grala brought the No. 3 home in seventh in his absence). He further impressed in the opening round of the playoffs, earning consecutive top-five finishes in the first two races (including a runner-up at the opener in Darlington). Dillon’s 11th-place finish of the standings tied a career-best previously set in 2017.

Reddick got off to a decent start to his career, leading the 2020 rookie class with three top fives and nine top tens. He was in contention for wins at several points during the season, including the aforementioned Texas event, where his runner-up posting created the first RCR sweep of the first couple spots since October 2011 at Talladega (Bowyer and Burton). Reddick nearly stole a playoff spot during the regular season finale at Daytona, but his involvement in a late wreck forced him to watch from the outside.

A target’s always going to be on Dillon’s back because of his status as both Earnhardt’s successor in the No. 3 and as Childress’ grandson. Dillon had proven his racing mettle at several points in the past, winning the 2011 Camping World Truck Series title and the 2013 Nationwide (now Xfinity) Series championship, as well as his aforementioned Daytona triumph. That meant little to NASCAR’s hard-to-please fanbase, but it appears that the latter stages of 2020 could be the start of something bigger for Dillon and the No. 3 team.

“I hope we can keep giving them something to talk about…The confidence is building,” Dillon said after a fourth-placing finish at Richmond in September. “I feel like a lot of people know that we’re here right now. And even if I get knocked out, eventually the naysayers are going to say, ‘See, I told you so,’ so I’m not worried about all that. My confidence comes from within my group. I’m so proud of the team that I’ve got surrounded by around me.”

Dillon might be glad to see on-track qualifying return to select races this season. He was one of six drivers to sit on the pole in at least three races during the 2019 season.

Reddick was by far the most consistent of the 2020 Cup rookie group. His lack of victories cost him the official award, with brief playoff contender Cole Custer taking it home through his triumph at Kentucky.

“He always wants as much as he canâ€™t heâ€™s a champion. Heâ€™s done a great job this year found a lot of speed at different tracks,” Dillon said of his teammates rookie season prior to the playoffs. “I think he did and does has done an amazing job all year as a rookie and I think itâ€™ll be in the playoffs for years to come. So itâ€™s one of those things that heâ€™s probably disappointed that but I think everybody knows that heâ€™s got the speed and the pace to win races and get in the playoffs as a real contender for years to come.â€

Last season saw RCR vehicles take down several dubious streaks, but there’s plenty of work to be done. No RCR participant has finished in the top ten of the standings since Ryan Newman’s runner-up posting in 2014 while driving the defunct No. 31. RCR is also looking to put multiple cars in the playoffs for the first time since 2017, when Dillon and Newman finished 11th and 16th respectively. It wouldn’t surprise anyone to see Reddick earn his first Cup Series win and playoff berth in 2021, while Dillon can truly force the racing world to take notice if he can make it to the semifinal round of eight this fall.