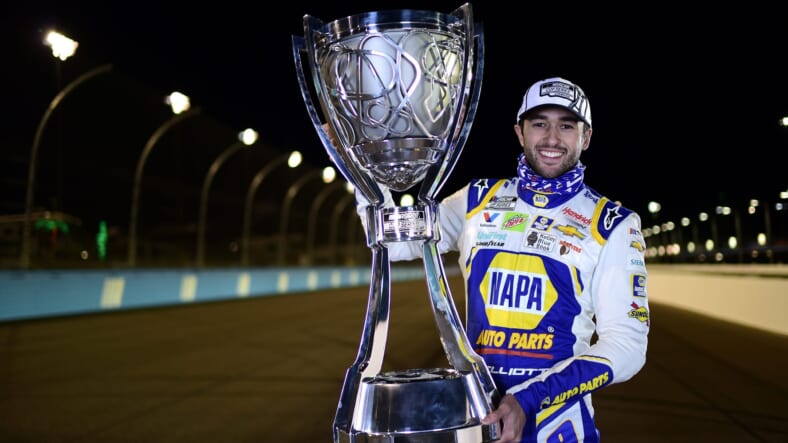 Jimmie Johnson’s NASCAR watch has ended at HMS. Are Chase Elliott and his teammates ready to follow in the steps of Johnson and Jeff Gordon?

In metropolitan terms, Hendrick Motorsports could well be the New York Yankees. Since North Carolina auto dealer Rick Hendrick entered the sport in 1984, some of the finest names in the sport have driven his Chevrolets…including fictional ones, as Hendrick provided the cars used in the NASCAR blockbusterÂ Days of Thunder.

The early days at HMS were dominated by strong runs with names like Geoffrey Bodine, Tim Richmond, Darrell Waltrip, and Ken Schrader, but championships proved elusive. That all changed in 1995, when wunderkind Jeff Gordon, in just his third season on the Cup Series circuit, held off Dale Earnhardt to earn the 1995 championship with the No. 24 team. Hendrick vehicles took each of the next four championships, with Terry Labonte triumphing in the ensuring 1996 season before Gordon captured two more. The fourth and final championship for Gordon came in 2001. Each of his 93 Cup Series victories, third-best all-time, came in Hendrick’s No. 24.

Just when the circuit had enough of Hendrick dominance…Joe Gibbs Racing was rising to power through championships for Bobby Labonte and Tony Stewart…Hendrick and Gordon unleashed the monster known as Jimmie Johnson unto the racing world in 2002, driving the newly formed No. 48 Chevrolet. It took a little more patience for Johnson to earn his first championship, but once he did so in 2006, his fifth full year in the Series, there was no stopping him. Johnson would go on to win five consecutive championships (2006-10) before adding two more (2013, 2016) to solidify himself as the driver with the most titles alongside Richard Petty and Dale Earnhardt. Like Gordon, Johnson won each and every one of his Cup Series races under a Hendrick banner, tallying 83 when all was said and done.

So, suffice to say…there’s a lot to live up to for Hendrick’s current crop.

Every new beginning comes from some other beginning’s end, as Semisonic routinely sang during Jeff Gordon’s heyday. That perfectly defined the Hendrick Motorsports mindset in 2020. As Jimmie Johnson struggled in a swan song, failing to earn one last win or a playoff berth in a tough season, Chase Elliott followed in his father Bill’s footsteps behind the wheel of the No. 9 Chevrolet. Elliott had been consistent all season…his three-win tally entering the penultimate race at Martinsville could’ve been more than doubled if not for some bad luck along the way…but many were expecting him to perform to a higher standard with strong equipment and a legendary NASCAR pedigree.

But Elliott proved his mettle in historic ways during the final segments of the season. An advancement to the championship round thanks to a win at Martinsville was seemingly for naught when he was forced to start the title-clincher at Phoenix at the back of the field due to failed inspection. But Elliott looked at the best possible way a racer could: more cars for him to pass.

Elliott not only worked his way up to the front at Phoenix, but he wound up leading a race-best 153 of 312 laps to clinch the title, the 13th in HMS’ treasured history. He and Bill also became the third father-son duo to take home matching Cup Series championships, joining the Jarretts (Ned and Dale) and Pettys (Lee and Richard).

Other drivers had their chance to shine for Hendrick as well. Alex Bowman, the internal successor to Johnson in the No. 48 Chevorlet, finished out his career under No. 88 branding with an appearance in the semifinal round of eight drivers, ironically dominating the California native Johnson’s final visit to Fontana early in the year. William Byron, bearing Gordon’s iconic numerals, earned his first victory at the regular season finale at Daytona.

By now, both the casual observer and the die-hard fan alike knows about Larson’s transgression that led to his ousting from Chip Ganassi Racing, uttering a racial slur during a virtual event on the iRacing platform. Larson’s return was earned through not only undergoing mandated sensitivity training from NASCAR but lending his time and resources to several charitable causes to educate himself on modern affairs and to be a better person. It was enough to convince Hendrick that Larson had earned a new opportunity, one to drive the No. 5 Chevrolet that Labonte drove to a championship a quarter-century prior.

“When you look at the character of what he is; a lot of people do things and they say Iâ€™m sorry, right?” Hendrick asked rhetorically. “They just say Iâ€™m sorry and go right on running their life. And thatâ€™s all they have to do. And people say okay, weâ€™ll give you another shot. This guy did ten times that. And heâ€™s created an image and things in that community that people really respect him. So, I guess the answer to the riddle is that Iâ€™m a part of it, but it was Kyleâ€™s heart and Kyleâ€™s desire that got him back.â€

There’s no denying that Larson has the talent to succeed in racing. He won six races driving CGR’s No. 42 (four during the 2017 campaign) and earned countless victories driving dirt cars during his suspension.

It truly is a bit of a shame that Elliott’s career is connected to so many of the sport’s most memorable names. He’s the son of Bill Elliott, originally took over for Jeff Gordon after racing for Dale Earnhardt Jr.’s team in the Xfinity Series. Such connections have helped Elliott reach this point, but may be used by detractors to discount his incredible success. With his first championship under his belt, Elliott is now ready to truly leave a mark on the sport; he knows that NASCAR is a world of “what have you done for me lately”, a feeling he feels has permeated every professional sport. He compared it to those who asked Jimmie Johnson the same questions toward the end of his career.

“In any sport, itâ€™s what have you done lately,” Elliott remarked. “I think about all the disrespect that Jimmie Johnson got toward the end of this career. Itâ€™s like everyone forgot about how great he is just because he had a bad race or a bad stretch of races. The lesson that taught me is that no matter what you do, if you have a bad stretch or donâ€™t do well, then theyâ€™re going to come after you about whatever youâ€™ve done recently.”

“On the flip side of that, if you have a good run after being trashed for a year or something, everyone is going to be hyping you up, be excited for you and jumping on the bandwagon. Itâ€™s all about performance and all about what youâ€™ve done lately. We want to push; we want to continue to do good for ourselves and push our team internally. Thatâ€™s all that matters to me, and thatâ€™s all that matters to our entire group.â€

Only making Elliott ever more dangerous this season? As the winner of the last four visits to road course events, perhaps no one is more excited to see a record seven on the 2021 slate than Elliott.

Byron has had a little trouble racing up to the reputation that his numerals mandate, failing to finish in the top ten in any of his first four seasons. He did get one monkey off his back by earning his first career victory at the regular season finale at Daytona that punched his playoff ticket. Byron mentioned that going into the new year liberated from the burden of missing out on his first Cup win will work in the team’s favor.

“Itâ€™s great that there is not as much attention on that headline and not as much outside noise. For us, the goal is still the same â€“ to win. Our goal has always been to win and now we can do it with some confidence. We can just focus on just doing our jobs.â€

To put things in metropolitan terms, Bowman replacing Johnson in the No. 48 is the equivalent of what Didi Gregorious went through when he took over the mantle of New York Yankees shortstop from Derek Jeter. It’s a spot that will feature increased eyes and heightened scrutiny, a challenge Bowman believes he’s handling well going into this fateful season.

Bowman is eager to fulfill those sky-high expectations but stays grounded by reminding himself that he’s working his way through NASCAR for himself.

“The biggest thing for me is thereâ€™s not a car number or situation in the world thatâ€™s going to put more pressure on me than I put on myself. I feel like all race car drivers are selfish but Iâ€™m really selfish,” he said. “I just want to win for me. Obviously, I want to win for Hendrick Motorsports and for Chevrolet and for Ally and for everybody that makes this deal possible.

Elliott is obviously going to be someone to keep an eye on in the grand scheme of things, while it’ll be interesting to see how Bowman handles the newfound responsibilities that are attached to the No. 48. Both Byron and Larson will each face heightened expectations as well, as Hendrick Motorsports undergoes a youthful revolt.