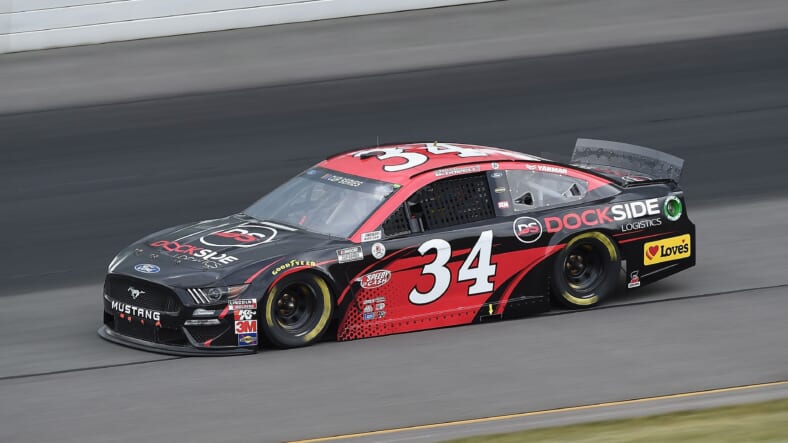 Despite relatively conservative settings, Front Row has been one of the Cup Series’ modern staples, regularly fielding cars since 2009 after first arriving five years earlier. The late John Andretti was the first full-time driver of the car, with names like David Gilliland, Josh Wise, and Brett Moffitt all assuming the titles in years since. Renowned part-time names include Terry Labonte, Jeff Green, and Joe Nemechek.

Front Row earned the ultimate triumph in the spring of 2013, when Gilliland pushed David Ragan to a victory at Talladega, allowing FRM to sweep the top two sports. Three years later, the team made a brief appearance in the NASCAR playoffs, earning a spot when Chris Buescher won a rain-shortened summer race at Pocono.

2020 was a breakout year of sorts for FRM, as the team earned a personal-best seven top ten finishes between Michael McDowell and Rookie of the Year contender John Hunter Nemechek, their best being the former’s seventh-place posting at Indianapolis. Nemechek had respectable efforts but he left at the end of the year to take over one of Kyle Busch’s Tundras in the Camping World Truck Series.

“Last year, we feel like we made a pretty big gain just from overall competitiveness and speed in our race cars,” said McDowell, whose 23rd-place finish in the standings was FRM’s best posting since Buescher reached the playoffs. “I feel like we have the potential to be more competitive this year than we even were last year, but you just never know until you get to the racetrack.â€

It’s a shame that McDowell’s season was mostly remembered for his get-together with Bubba Wallace at the All-Star Open event at Bristol in July. Having worked with low-budget teams for most of his career, McDowell put up the best numbers of his Cup Series career, earning a career-best four top-ten finishes, each of them coming away from superspeedways. Prior to that, McDowell had one such result, coming at Homestead in the 2016 finale. This season will be his fourth in the No. 34 Ford.

“Itâ€™s a lot of fun because on those good days where you sneak out a top 10 or a top five you really feel like youâ€™ve accomplished something,” McDowell said of competing with a mid-budget team. “Then you obviously have those ups-and-downs, on those days where you run twenty-something you can kind of brush it off and get ready for the next week. But just seeing the steady progression for us is what I think is the motivator. Last year, you always have high expectations, but when you actually go out there and perform we started to feel like, â€˜Hey, we can do this. We can run 15th every week and we can beat two or three of these big teams and do it on a weekly basis.â€™ So that was a lot of fun and very rewarding and hopefully, we can keep that going into 2021 as well.â€

Even McDowell’s crash with Wallace at the Open led to some good in the end. The pair auctioned off the bumper from Wallace’s downed No. 43 for the non-denominational Motor Racing Outreach, a religious organization that provides service and worship opportunities for drivers on the NASCAR circuit. Such an endeavor raised over $20,000.

Ragan will once again briefly end his retirement to run the Daytona 500, doing so last year in a collaborative effort between FRM and Rick Ware Racing. Daytona is the site of Ragan’s other Cup Series victory, which came in July 2011 in Jack Roush’s No. 6 Ford. Ragan finished fourth in last season’s 500, his first top five since subbing for an injured Kyle Busch in 2015.

Alfredo already has a lot to prove, even before he makes his first Cup Series start. Choosing the Connecticut native to take over for Nemechek in the No. 38 was a surprising decision considering he hasn’t run a full Xfinity Series season yet. He has some short track success to his name, finishing in the runner-up slot in the CARS Late Model Tour with Dale Earnhardt Jr.’s team.

“Itâ€™s a huge step for myself and my career and to be competing against childhood heroes of mine, guys who have been racing not only in their career but in this series since before I was born or maybe one years old. I think guys like (Ryan) Newman have been in the series since I was one or two, so there are a lot of veterans out there and I know that they have a tremendous amount of experience in general in racing, let alone just this level, so Iâ€™m looking forward to learning from them.”

“Itâ€™s going to be a challenge to compete with them on a regular basis, but thatâ€™s what probably has me most psyched about this year.”

Alfredo did show some strong potential while sharing Richard Childress Racing’s Xfinity ride with Myatt Snider and Kaz Grala. He earned top tens in five of his first nine starts (including a fourth at Homestead) and closed his tenure out with a third-place showing at Texas. The No. 38 will be one of two Rookie of the Year contenders on the Cup Series level, squaring off against Chase Briscoe and Stewart-Haas Racing’s No. 14 Ford.

Contending at non-superspeedway events might be a tad too much to ask for from FRM’s perspective, but putting a car in the top 20 in the standings is a realistic goal.