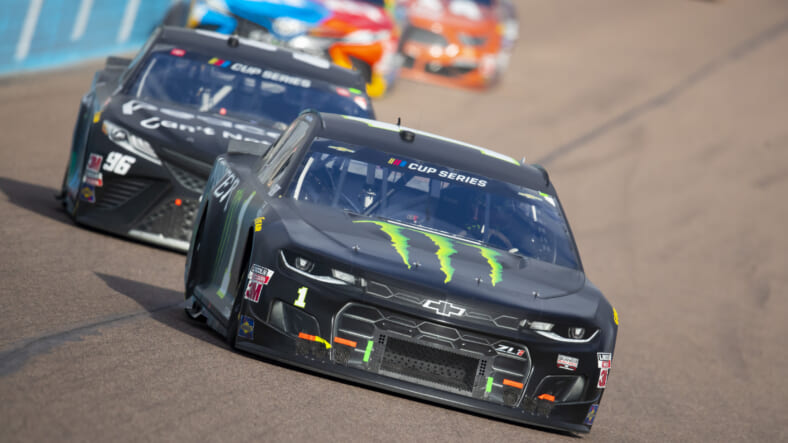 CGR’s 2021 roster features a former NASCAR champion gearing up for another run, and an Xfinity standout looking to make an impact.

Chip Ganassi Racing began competition in 1989, formed by the eponymous Ganassi and millionaire Felix Sabates. Ganassi has also formed successful ventures at the IndyCar and Grand-Am levels. He took over a controlling interest of the team in 2001, enjoying a brief period of prosperity with Sterling Marlin driving the No. 40 Dodge dubbed the “Silver Bullet” thanks to its sponsorship from Coors Light. Marlin finished third in the final 2001 Cup Series ledger and was at the top of the pack for a majority of the 2002 seasons before he was sidelined with a neck injury. After Jamie McMurray won in his second career Cup Series start while subbing for Marlin, the team won only a single race over the next 13 seasons, with Juan Pablo Montoya triumphing at Sonoma in 2007.

Ganassi vehicles have run more consistently over recent seasons. Kyle Larson won four races in the No. 42 Chevrolet in 2017, while Kurt Busch has earned a win in each of the last two seasons in the No. 1.

2020 was a year of controversy and resurgence for CGR. Larson got off to a strong start (three top-tens in the first four races) but was dismissed during the coronavirus-induced pause for using a racial slur during a virtual event on the iRacing platform. Matt Kenseth, the 2003 Cup Series champion, came out of retirement to pilot the No. 42 the rest of the way, but never found momentum save for a runner-up finish at Indianapolis in July.

Meanwhile, Busch managed to stay consistent in his second year driving Gannasi’s No. 1 Chevrolet. He hovered around the latter half of the playoff bracket with 14 top-ten finishes in the 26 regular season races and reached the postseason festivities for the eighth straight year. Busch earned a statement victory at his home track of Las Vegas, leading the final 26 laps to win the South Point 400. It earned him automatic advancement to the semifinal round that featured eight drivers contending for the championship, but an engine failure at Kansas stifled his chances at reaching the championship quartet.

It’s not officially silly season without pondering Busch’s future. Set to turn 42 in August, Busch is one of three remaining full-time drivers to race during NASCAR’s days under the “Winston Cup” moniker (Kevin Harvick and Ryan Newman are the others). Busch appeared to be leaning toward retirement after 2019 but signed on for two more years at the helm after coming home 13th in the final standings and stealing a win from his younger brother Kyle at Kentucky earlier that season.

In an interview with Matt Mayer of CBS Sports after his win at Las Vegas, Busch said that there was a “50/50 chance” that 2021 could be his final season.

“I’ve been at this game a long time,” Busch said at the time. “I’ve been out there 21 years and my wife is a great supporter of mine and she loves the racing but it’s been a bunch of years out on the road and out on the circuit and we’ll see what 2022 brings us when we get there.”

Busch is best known for winning the 2004 Cup Series championship, the first held under a playoff format.

This will be Chastain’s first year racing full-time on the Cup Series circuit, but he’s anything but a rookie. Chastain, now driving the No. 42 vacated by Kenseth, has made 79 Cup Series starts, often in low-budget cars, though he did get some experience prior to the pause in Roush Fenway’s No. 6 Ford in relief of an injured Newman. In the meantime, Chastain has become a force to be reckoned with on NASCAR’s lower national levels, finishing in the runner-up slot on the 2019 NASCAR Camping World Truck Series circuit. He didn’t win a race on the Xfinity level last season, but he led all drivers with 27 postings in the top ten.

“He’s a great addition. Ross Chastain will fit in right away,” Busch said of Chastain’s entry after the announcement was made. “He’s had some tough situations stacked against him with different sponsors and movement. But he’s had the strength to rise above that.”

Busch should secure a spot among the playoff contenders again, and will likely be in contention for wins at multiple points this season. As for Chastain, it’s going to be interesting to see how the No. 42 car comes out this year after struggling under Kenseth’s watch for the majority of 2020. Reaching the playoffs in his first full-time endeavor would be a realistic, attainable goal as both he and the No. 42 team as a whole seek to get back on the right track.