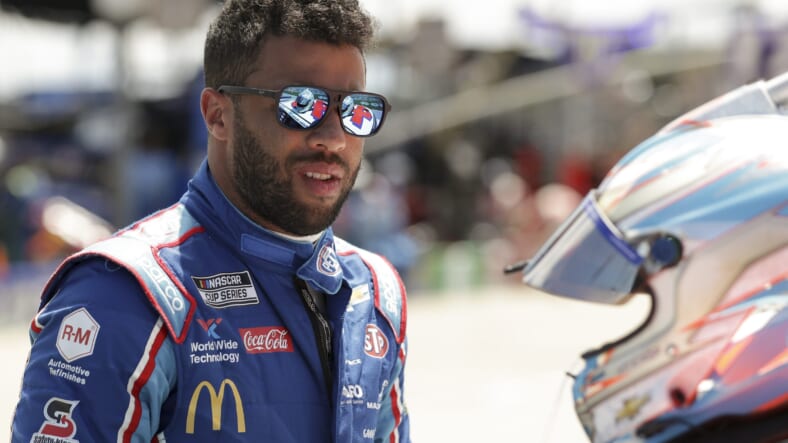 MJ is going from The Last Dance to his first NASCAR laps; what can we expect from his new venture with Bubba Wallace and Denny Hamlin?

Michael Jordan’s exploits with one “Dream Team” have been well documented. He might have another one brewing in Mooresville, a half-hour drive from his current hardwood dominion in Charlotte.

After months of rumors, Jordan formally announced his NASCAR venture in September, bringing along the accomplished Denny Hamlin as a co-owner. Bubba Wallace will pilot a Toyota appropriately bearing the No. 23, Jordan’s number during his legendary NBA endeavors.

“The opportunity to own my own racing team in partnership with my friend, Denny Hamlin, and to have Bubba Wallace driving for us, is very exciting for me,” Jordan said on the team website. “Historically, NASCAR has struggled with diversity and there have been few Black owners. The timing seemed perfect as NASCAR is evolving and embracing social change more and more. In addition to the recent commitment and donations I have made to combat systemic racism, I see this as a chance to educate a new audience and open more opportunities for Black people in racing.”

23XI (pronounced “twenty-three eleven”) made its unofficial debut during the Busch Clash exhibition on Tuesday night. With Wallace ineligible for the event, Ty Dillon drove the car to an 18th-place finish.

Wallace’s activism worked alongside the best season of his Cup Series career. In his final year driving Richard Petty’s No. 43, Wallace more than doubled his career total with five top-ten finishes, including a fifth-place posting at Daytona last summer. His 22nd-place finish in the final standings was the best showing for the No. 43 since Aric Almirola came home 17th in 2015.

Wallace stated he often sets a goal at the start of the year to “not be a part of the headlines”. Obviously, circumstances forced to cast that quest aside.

“Every year I have that goal and I failed every year because thereâ€™s something thatâ€™s like, â€˜Hey, I wanna, you know, not make any controversy.â€™ So something always happens whether itâ€™s my doing or not, but it seems like itâ€™s always my doing so,” Wallace said. Despite the active struggles, he believes the progress he created both on and off the track will lead to a brighter future on both a personal and circuit-wide level.

“I think we put NASCAR on the map in a lot of new areas with a lot of new fans looking to tune in this year, which is great. Itâ€™s important. Itâ€™s huge for all of us. We just need to keep the ball rolling.â€

As Wallace raised his voice beyond the track, his racing career has faced greater scrutiny. In an era where fans bemoan the idea that drivers have not “earned” their Cup Series rides, Wallace’s credentials cannot be questioned. He earned six victories at the Truck Series level and he was running fourth in the 2017 Xfinity Series circuit when his Roush Fenway Racing shut down due to sponsorship issues. He came home in the runner-up spot in his Daytona 500 debut a year later. Ideally, Wallace would be able to focus solely on his racing endeavors, but reality has reared its ugly head far too many times.

“I think I look at the races that we had driving the 43, the races where we were running up front and competing. We were strong,” I look at Indy two years ago and even last year, I know how to race against those guys. Do they expect me to be up there? No. And do they race me differently because of it? Yes. I think thatâ€™s the biggest thing thatâ€™s going to change for other drivers. Itâ€™s going to, hopefully, itâ€™s like, â€˜Okay, this kid, this guy, whatever, they call me, whatever, knows what heâ€™s doing up here. And so we have to race him a little bit different.â€™

“Iâ€™m not expecting it to be a cake walk at all. Weâ€™re there to race and race hard.”

With new fans, with big names comes undoubtedly high expectations. It’d be unfortunate, for instance, to see 23XI go the way of Hall of Fame Racing, a short-lived venture for Dallas Cowboys passing legends Roger Staubach and Troy Aikman. But, fortunately for 23XI, it’s not like they’re starting entirely from scratch. They’re operating in the former shops of defunct Germain Racing (a mid-budget team that fielded the No. 13 car for over a decade) and are working with a technical alliance with Hamlin’s current employers at Joe Gibbs Racing.

Wallace himself admitted that trying to win every single race is an unrealistic goal, though he hinted that he’s often set landmarks at two wins in a season. He did end up creating a reliable barometer while meeting with the media prior to arriving at Daytona.

“Do I expect to jump in and win right off the bat? No, not at all. I know the sport. If it was that easy, a lot of people would be doing it, but itâ€™s not that easy,” Wallace said. “We start to build a resume at Daytona and build off that and continue to get better for our team. Itâ€™s going to take a couple of races, just like any new team will to get everything underneath us and make sure like, â€˜Oh, we missed that last week.â€™ Letâ€™s make sure we donâ€™t do that and prepare for the next and build on that. Then once we get going and get a couple of races under our belts, then we can really start to pinpoint our weaknesses or our strong points and build off those and grow from those and learn from everything.”