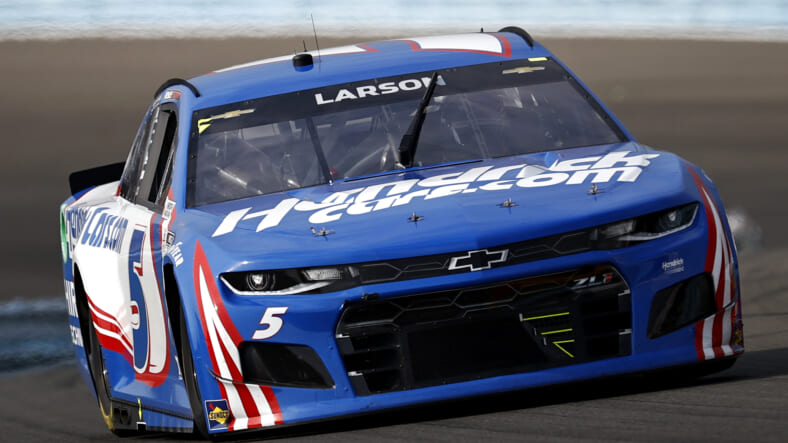 After finishing 19th at Kansas in early May, Kyle Larson sat 9th in the NASCAR Cup Series standings with just one win and a 150 point deficit to leader Denny Hamlin. Twelve races and four more wins later, Larson has tied Hamlin for the points lead at 917 with three races to go in the regular season.

“It’s making me keep my form,” Hamlin said after his 5th place finish at Watkins Glen. “It’s really pushing me to treat every race like it’s a playoff race”.

Hamiln entered Sunday’s Go Bowling at the Glen with a 13-point advantage over Larson. However, despite the 5th place finish, Larson took five more stage points than Hamlin and scored the victory to tie his good friend for the Cup Series lead.

“It’d be nice to have a couple of good weeks and get that points lead,” Larson said on his battle with Hamlin coming down to the regular-season finale at Daytona. “I know he’s going to go [to Daytona], he’s going to get stage points, and challenge for the win.

Although Daytona is circled on Hamlin’s calendar as a great opportunity to score a win, Larson has Michigan International Speedway circled on his. He’s won three times in 12 starts at the fast 2.0-mile oval with all three wins coming consecutively between 2016 and 2017.

However, despite being winless this season, Hamlin isn’t letting that bother him as the playoffs near closer.

“It doesn’t worry me,” Hamlin said prerace on Sunday. “It’s just the battle with Larson that I’m focused on……[we’ve] been good. We’ve had crazy stuff happen to us. [We] had a lugnut flying in the air at Loudon, taking us out of contention where I thought we had the best car. We’re still consistent, we’re up front every week, we’re top-3-to-4 every week [and] it doesn’t matter what kind of race track”.

Hamlin and Larson’s battle for the regular-season points championship continues on Sunday at the Indianapolis Motor Speedway Road Course.