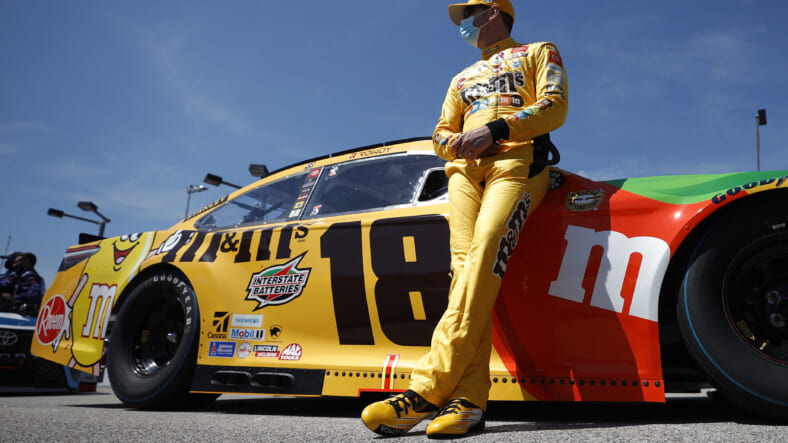 DARLINGTON, SOUTH CAROLINA - MAY 09: Kyle Busch, driver of the #18 M&M's Toyota, waits on the grid prior to the NASCAR Cup Series Goodyear 400 at Darlington Raceway on May 09, 2021 in Darlington, South Carolina. (Photo by Chris Graythen/Getty Images)

Kyle Busch had one of the best, if not the best car in Saturday’s Fedearted Auto Parts 400 Salute to First Responders at Richmond Raceway. Unfortunately, two untimely penalties took Busch out of winning contention and forced him to settle for ninth-place instead.

NASCAR penalized the No. 18 team during the lap 30 competition caution for what the sanctioning body called “equipment interference”. A tire from the pitstop rolled into the stall of Justin Haley ahead, interfering with his team’s pitstop. NASCAR instructed Busch to drop to the rear for the impending restart.

All four Joe Gibbs Racing cars ran in the top-4 for most of the third stage with Busch even taking the lead for 39 laps. However, Busch committed a speeding penalty on his final pitstop of the day and needed to serve a pass-through penalty. Just 10 cars were on the lead lap at the time, so Busch remained in the top-10 despite his miscue and gained one more position to finish 9th.

Busch picked up 37 points despite his pit road problems and vaulted from 14th to 10th in the Cup Series playoff standings. He sits eight points above cutline. Kurt Busch and Alex Bowman currently tie in 12th place with a potential tiebreaker going to Bowman to advance to the Round of 12.

The NASCAR Cup Series returns to action next Saturday at Bristol for the Bass Pro Shops Night Race. The Busch brothers have won a combined 14 times at the 0.533-mile short track and are both favorites to win.