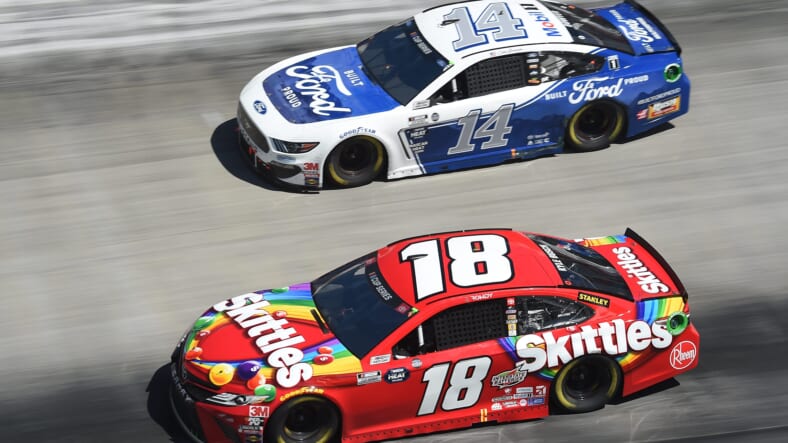 Bowyer, 41, has been racing in the NASCAR Cup Series full-time since 2006. He will increase his duties with Fox Sports next season.

Bowyer, the current driver of the No. 14 Stewart-Haas Racing Ford, will finish out the 2020 season and move to the Fox Sports’ NASCAR coverage. His letter begins by recapping his early auto racing career while growing up in Emporia, Kansas before describing his NASCAR career in vivid terms, thanking every owner and sponsor he’s raced under during his tenure before making his announcement.

“I have a new opportunity (to) do what’s next in my life. In 2021, my suit will no longer be fireproof. I will be joining the FOX [sic] booth on Sundays,” Bowyer wrote. “Just like my driving career, I will be part of a great team and organization with great teammates. To say I’m excited would be an understatement.”

Bowyer joined NASCAR’s national proceedings under the watch of renowned team owner Richard Childress, running his first races in what is now the Xfinity Series level in 2004. He was promoted to full-time Cup racing in 2006, driving the No. 07 Chevrolet for Childress. The first of 10 Cup Series came in the 2007 Sylvania 300 at New Hampshire Motorspeedway en route to a third-place finish in the final standings. Bowyer raced in the No. 07, and later the No. 33, for six seasons before moving to Michael Waltrip Racing in 2012. While with Childress, Bowyer took home the 2008 Xfinity (then Nationwide) Series title.

Driving the No. 15 Toyota for MWR, Bowyer flourished in 2012, winning a career-best three races and finishing in the runner-up spot in the Cup Series standings. He briefly raced for low-budget HScott Motorsports after MWR shut down prior to the 2016 season, but took over SHR’s No. 14 after the retirement of former champion and team owner Tony Stewart. Bowyer has made the NASCAR playoffs in each of his last three seasons with SHR, winning two races in 2018.

During his career, Bowyer’s vibrant personality endeared him to fans and fellow drivers alike. That trait was fully on display during NASCAR’s coronavirus-induced pause in early spring, as Bowyer earned positive reviews while both analyzing and competing in virtual events hosted on the iRacing simulator alongside Fox regulars Mike Joy and Jeff Gordon. Bowyer also called events on the NASCAR Gander RV and Outdoor Truck Series level for FS1. His Fox debut came during an Xfinity Series race at Pocono a year prior.

With Bowyer vacating the No. 14 Ford, SHR did not announce an immediate heir, but it’s very possible that the wheel will be turned to the team’s Xfinity Series driver Chase Briscoe. His No. 98 Ford currently tops the Xfinity playoff standings and has won a circuit-best eight races this season.

Bowyer currently sits 11th in the Cup Series playoff ledger, 38 points away from the cutoff to the Round of 8. He’ll have one last opportunity to advance on Sunday afternoon in Charlotte’s Bank of America Roval 400 (2:30 p.m. ET, NBC). The No. 14 Ford will start 11th.