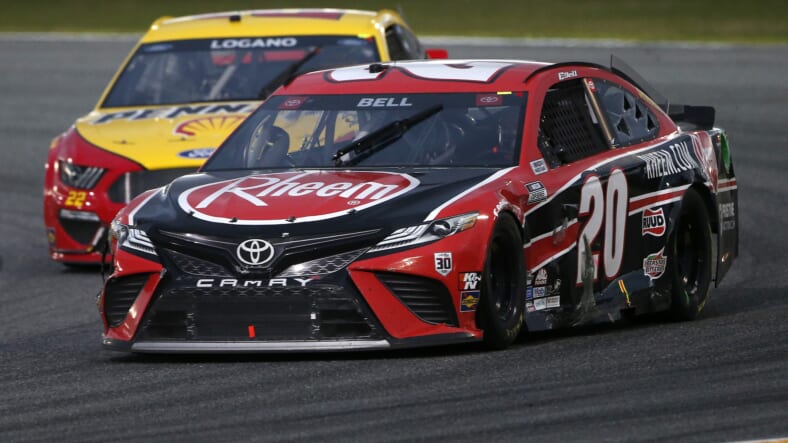 Bell’s late pass of Joey Logano allowed him to capture his first NASCAR Cup Series victory, a week after Michael McDowell earned his.

Joe Gibbs hasn’t coached in the NFL since 2007. Yet, his teams are still finding ways to win on Sunday.

“This is the happiest moment Iâ€™ve had in a very long time. 2020 was one of the hardest seasons Iâ€™ve ever had in my racing career,” Bell said. “To be able to come back in 21 and win in the Cup Series this early on a road course is something that Iâ€™m going to cherish for the rest of my life.”

Bell has been part of Gibbs’ developmental endeavors for several seasons, previously winning 16 races over three years in his Xfinity program. The 26-year-old also won the 2017 NASCAR Camping World Truck Series title in a Toyota Tundra owned by his current teammate Kyle Busch. His rookie season at the Cup level was a struggle, driving the No. 95 Toyota for the Gibbs-affiliated Leavine Family Racing. Bell struggled in lesser equipment but showed some speed in last season’s maiden voyage on Daytona’s road course.

Early in the race, Bell took an early risk, staying on the track during a caution for debris on the track toward the end of the first 16-lap stage while a majority of the rest of the field pitted. The No. 20 failed to earn stage points with a 12th-place finish, but there was no denying its speed. Defending Cup Series champion Chase Elliott, also the winner of the past four road course events, dominated the early portions of the race, but Bell’s Toyota was matching his times. Elliott and Bell were running in the top two spots after each pitted at lap 57 of 70 when a caution came out for rain.

Both Bell and Elliott visited pit road, but Elliott fell out of contention after two separate incidents with Corey LaJoie and later Bell’s teammate Denny Hamlin, relegating him to a 21st-place finish. Bell won the race off pit road and restarted 12th, quickly making his way through the field on fresher tires. He made it up to sixth after the Elliott-LaJoie get-together and another incident involving Tyler Reddick brought out cautions.

Going back green, Bell worked his way through on-track chaos and some of the sport’s most renowned names to earn his way to the front. His pass of Logano left behind Hamlin, as well as prior champions Kurt Busch, Brad Keselowski, and Kevin Harvick.

“The last lap was pretty surreal,” Bell recalled. “All race long I kind of felt like I was trying to do my best job and not screwing up, hit my marks, not overdriving the corners. Whenever I got by the 22 coming to the white flag, I knew I was faster than him. I ran him down from a while back. All I had to do was get a couple of good corners and get away.”

With his win, each of the first two events of the Cup Series season has featured a first-time winner, following Michael McDowell’s win at the Daytona 500 (run on the traditional oval) last weekend. This is the third time a season has opened with consecutive first-time winners, with such a feat also occurring in 1949 and 1950.

The NASCAR Cup Series returns to action next Sunday at Homestead-Miami Speedway for the Dixie Vodka 400 (3:30 p.m. ET, Fox).