NASCAR: Chase Elliott welcomes back fans with a win in the All-Star Race 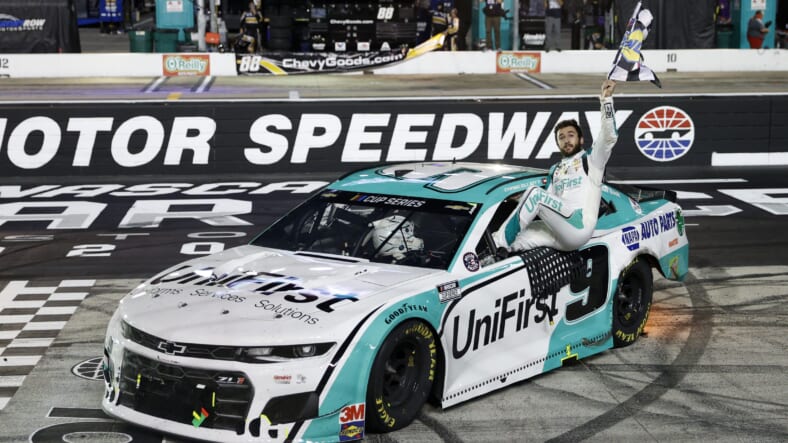 As about 20,000 NASCAR fans descended upon Bristol for a historic night, Chase Elliott entertained them with a win in the All-Star Race.

NASCAR enacted all kinds of new features for its annual All-Star event. The race moved to Bristol Motor Speedway after over three decades at Charlotte. Door numbers on the competing machines were shifted backward. A “choose cone” setup allowed drivers to pick their restart lane. An “underglow” lighting system beneath each of the cars gave the race an aesthetic perhaps inspired byÂ The Fast and the Furious.

But for all those changes, it was a familiar name that wound up taking the checkered flag.

Chase Elliott led the final 31 laps of the NASCAR All-Star Race, securing victory in the landmark exhibition event. He won each of the middle 35-lap stages after Ryan Blaney took home the first 55-lap portion before holding off Kyle Busch over the last 15-lap dash to set off the celebration. This the first time the event was held at a short track and only the second time in its 36-year history it was not held at NASCAR’s hub track of Charlotte Motor Speedway.

“To me, this is one of those prestigious events that the Cup Series only has,” Elliott said afterward. “This is a special race on the schedule every year. There’s a lot of hype around it. The other thing about it is, you know, it’s something you have to race your way into. Luckily, we raced our way into this deal for life now. That means a lot.”

Ironically, the only other non-Charlotte All-Star event was won by Elliott’s father Bill in 1986 at Atlanta. The Elliotts, each driving a No. 9 car, are the second father-son duo to win the All-Star Race, joining the Earnhardts (Dale Sr. in 1987 and Dale Jr. in 2000).

Adding to the irony was the fact that Elliott, the back-to-back winner of the NASCAR Cup Series’ Most Popular Driver Award, won when NASCAR welcomed about 20,000 fans back to the stands. It is the most populous sporting event in America since the COVID-19 pandemic began.

“To me tonight felt like an event again.Â Â I feel like we’ve been missing that piece for a couple of months. It just felt really good to get NASCAR back,” Elliott said. “NASCAR is built on the fans. Once the race starts, it’s hard to engage with them because you can’t hear them.Â Before a race, the atmosphere was energetic again.Â I felt like the vibe was back. I felt like that fire and intensity in me was back even more so than it has been, a piece that had been missing.Â Â I think that’s driven by the people, the cars pulling in, the prerace parties, and everything that you see.”

Busch came home in the runner-up spot, while Kevin Harvick moved up to third after opting for fresher tires before the aforementioned 15-lap stage. Brad Keselowski and Denny Hamlin rounded out the top five, while Blaney finished sixth after running the last 85 laps on older tires.