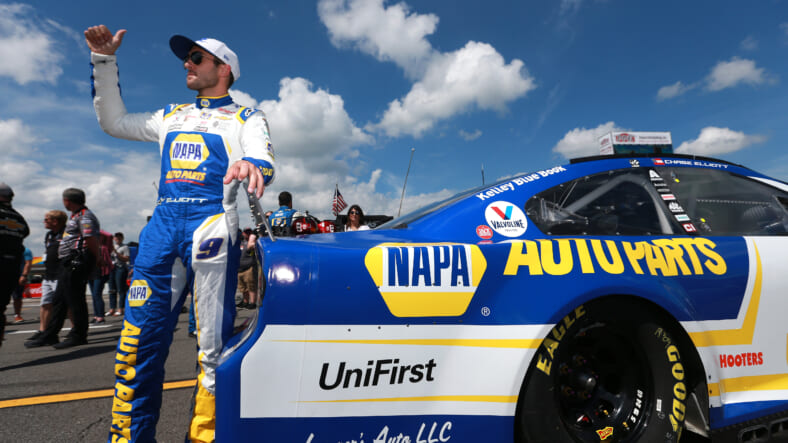 LONG POND, PENNSYLVANIA - JUNE 27: Chase Elliott, driver of the #9 NAPA Auto Parts Chevrolet, gives a thumbs up on the grid prior to the NASCAR Cup Series Explore the Pocono Mountains 350 at Pocono Raceway on June 27, 2021 in Long Pond, Pennsylvania. (Photo by Sean Gardner/Getty Images)

Still a long way to go at @RoadAmerica!

It had been a long time since the NASCAR Cup Series descended upon Elkhart Lake’s Road America road course in Wisconsin. Chase Elliott, driver of the No. 9 Hendrick Motorsports Chevrolet, made sure the uniqueness was kept to a minimum.

As the Cup Series held its first event at Road America since 1956, Elliott reclaimed his road course crown by passing Kyle Busch on lap 46 of 62 to take home the Jockey Made in America 250. Christopher Bell got by his Joe Gibbs Racing teammate Kyle Busch to finish second while Kurt Busch and Denny Hamlin, another Gibbs Toyota, rounded out the top five at the 4.048-mile circuit.

The defending NASCAR Cup Series champion has now won seven races on road courses, good for sole possession of third place in the circuit’s history. Only Jeff Gordon (9) and Tony Stewart (8) have won more. Elliott previously won in May at the rain-shortened event at Austin’s Circuit of the Americas. HMS Chevys also returned to victory lane after a one-race pause at Pocono last Sunday, having now won seven of the last eight points-paying events.

Elliott’s latest road course triumph was an uphill battle. During Sunday morning’s qualifying session, the No. 9 failed to finish a full-speed lap in the allotted window, forcing him to start in the 34th position. He was able to move up to 10th by the end of the first 14-lap stage (won by HMS teammate William Byron), assisted by some teams that pitted late for strategy purposes. The No. 9 led its first laps at the onset of the third and final segment, passing Matt DiBenedetto at lap 38.

Kyle Busch briefly got back out front when a majority of the field made its final pit stop under caution at lap 44, a sequence initiated by Anthony Alfredo’s spin into the gravel in Turn 1. Elliott quickly resecured the lead and coasted over the final 17 laps of green flag racing, beating out Bell by a 5.7-second margin.

That's a first.@ChaseElliott needed a tire change to get to victory lane! #NBCRacingWeekend // #NASCAR pic.twitter.com/rqvaByasIf

At over four miles, Road America is one of the most daunting visits on the NASCAR circuit. But the only time the distance affected Elliott’s No. 9 group was through his celebration.Â Eager to greet the fans at every turn, Elliott indulged those in Turn 5 with a victorious burnout, one that wound up tearing up his tires to the point he not only needed a push from the track’s safety crew but an impromptu pit stop at the stop finish line so his winning vehicle could make it to victory lane. The joyous reactions from his crew, however, were more than enough proof that the extra work was completely worth it.

The NASCAR Cup Series returns to action next Sunday at Atlanta Motor Speedway for the Quaker State 500 presented by Walmart (3:30 p.m. ET, NBCSN).