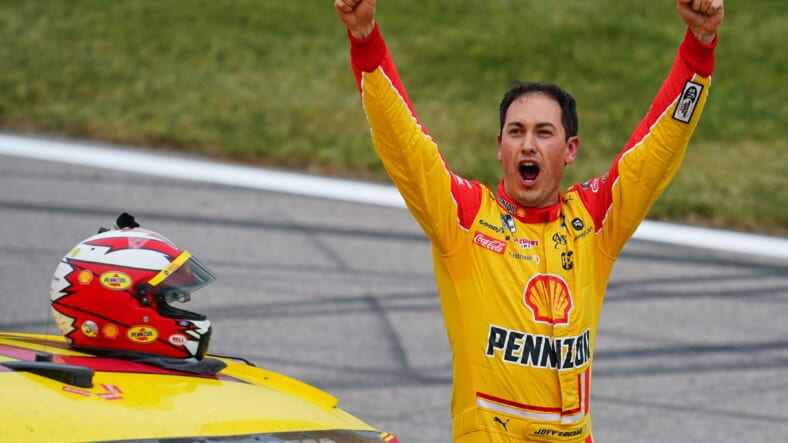 With his declaration of being the favorite and propensity to win no matter what, Joey Logano doesn’t want friends…he wants a NASCAR title.

We’ve been through a lot in the social distancing era, so it’s downright shocking to go back to the early stages of 2020 and realize that, yes, that indeed happened in 2020.

The Kansas City Chiefs won the Super Bowl. The NBA All-Star Game came back from the dead under a new scoring format. XFL 2.0 came and went. Joey Logano won the first race at the new site of NASCAR’s championship finale.

Logano was the man to beat before the world stopped, earning two wins over the first four events of the 2020 Cup Series season, the latter being the Fan Shield 500 at Phoenix Raceway on March 8. He managed to get the best of an eventful race, evading several late-race cautions and restarts to earn a victory in overtime before the COVID-19-induced pause commenced.

“It does feel like a long time ago when we were out there.” Logano said with a laugh when asked about the victory earlier this week. “So many things have happened since then, I think that’s why.”

Eight months later, the NASCAR season finale is ready to descend upon the desert on Sunday (3 p.m. ET, NBC). It’s the first time that the championship finale will be held at the recently-renovated facility after nearly two decades at Homestead-Miami Speedway, where Logano captured his first NASCAR Cup Series title in 2018.

Alas for Logano, there’s not as much he can take from his car in that event as he would like. In adjusting to life after the pandemic, the weekend staples of qualifying and practices have been almost entirely erased. The starting lineup has been instead been determined by random draws and statistical formulas. Logano was originally set to start second but moved up to pole position after Chase Elliott failed prerace inspection.

“Thereâ€™s definitely things you can go back on,” he said. “Thatâ€™s really all we have, to be honest with you. We donâ€™t have the opportunity to try many new things without practice, right? You donâ€™t want to go too far outside of the box. You know what worked for you in the spring. We had a very fast car, overcame a lot of adversity, still won the race. It just shows that we had a very good car. We can make some tweaks here and there to the setup probably, some things that we feel very confident in will be better, but weâ€™re not going to step way outside the box. Itâ€™s just kind of what we got. Even though it feels like a year and a half ago when we were out there, thatâ€™s really what we have to go back on, is our notes from that race.”

The driver of the No. 22 Team Penske Ford is no stranger to big moments in his NASCAR career. Heck, this is a driver that was bestowed the nickname “Sliced Bread” in reference to the age-old “best thing since” axiom during his days on the lower tiers of NASCAR. He has responded with the aforementioned Cup title and 26 race victories over the past nine seasons. Anti-Logano conspiracy theorists could perhaps argue that the shift to Phoenix was made to help him out, as he has earned a pair of wins and three consecutive top-ten finishes at the track.

It’s perhaps safe to say that Logano has made his share of detractors. Kyle Busch, whose reign as Cup Series champion will end in the desert today, remarked after a contentious get-together during the opening playoff round’s closer at Bristol that Logano “had zero friends on the racetrack”. Logano replied only by wholeheartedly agreeing days later.

Yet, Logano’s aggressiveness has been a throwback to the days of “rubbin’s racing” that fans have harkened for. Alas for these fans, Logano has been taking their favorites out in the process. For example, he took away a win at Martinsville away from Martin Truex Jr. in 2018, a win that more or less led to the latter’s playoff demise. Logano went on to take home his title.

That aggressiveness is on display through Logano’s attitude when it comes to the first Phoenix finale. While other drivers have been pleased with inclusion in the championship quartet, Logano dismissed such a notion in the most polite way possible.

“I think titles are the most important thing,” he said. “Any sport you look at, the question is, How many championships do you have? Not how many times have you made it to the finals? I take some pride in saying we made it to the Championship 4 this many times. Thatâ€™s great. It shows a body of work throughout the year. I know it comes down to one race, itâ€™s all or nothing. I get that. But the trophy is what itâ€™s about.”

Winning a championship in a year where drivers are more or less going from their street cars to their racecars would be quite telling for any of the drivers competing, taking home the trophy in a year where on-track adjustments through practice and qualifying have been rendered null and void. It’s an honor that seems to be fueling Logano as he tries to earn that second championship to accompany the first.