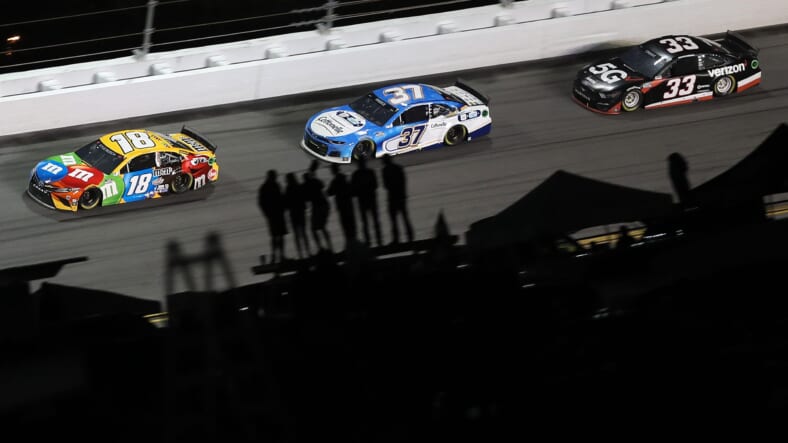 Cindric’s NASCAR Cup Series debut literally went up in flames, but there were plenty of positives to glean from Sunday’s race.

That’s what Cindric, driving the No. 33 Team Penske Ford, posted on Twitter after the race ended in a fiery finale, a multi-car wreck that also totaled the cars of his teammates Brad Keselowski and Joey Logano. The on-track damage ended the race early, as the caution was flown for safety reasons, allowing Michael McDowell to earn his high-publicized first career victory.

According to Cindric, his postrace tweet was not meant to be tongue-in-cheek, as it was the first time he had been involved in a firey accident (set off by excess fuel remaining in the cars). Armed with his health and a slight sense of humor, he was able to smile about it days later, but overall called his introduction to fire “unnerving”.

“I wasnâ€™t trying to be a smart-alek, but it is amazing. Holy cow. The amount of heat that comes off that,” Cindric said. “There was a big fire. That was the first time I had been in a fire. I didnâ€™t know if I was on fire or not. That was a bit unnerving, to be honest. It was a big impact. I’m fine.”

It’s a shame that Cindric’s Speedweeks, the opening festivities of the NASCAR season, will be best remembered for the chaos on the last lap. In making his Cup debut, Cindric ran in the top ten for most of the day and even led two laps after finishing the first 65-lap stage in fifth-place. It’s the first of several starts Cindric, one of the modern stars of the NASCAR Xfinity Series (the AAA-baseball equivalent of NASCAR), will make in anticipation of his full-time debut on the premier circuit. The 22-year-old will race for the Penske-affiliated Wood Brothers Racing next season, taking over the No. 21 Ford now occupied by Matt DiBenedetto.

Cindric was officially credited finished 15th in the main event. Prior to the wreck, a miscommunication on pit road pushed him toward the back of the lead-lap field. He previously overcame pit road disaster, in this case a speeding penalty, in the Bluegreen Vacations Duels to qualify for the 500. The No. 33 finished 16th but gained some assistance when Ryan Preece finished ahead of Ty Dillon to secure the “open” spots available.

Cindric was pleased with the way his Cup endeavors went overall. He earned some positive feedback from Penske teammate Logano, with whom Cindric united as a draft partner for a good portion of the evening. Logano’s No. 22 Ford was leading on the final lap before McDowell’s victorious move and chaos erupted to close things out. Working with teammates was a fresh experience for Cindric, who operates as a one-driver show in Penske’s Xfinity program, where he represents the same numerals as Logano. Cindric won last season’s Xfinity Series championship, Penske’s first since Keselowski also won in the 22 back in 2010.

“I definitely wanted (Logano’s) feedback as far as things to do better and things we could work on moving forward,” he said. “He is really positive and really strong at that discipline of racing. It is great to have guys to lean on. I havenâ€™t had teammates in a few years so to have guys to bounce ideas off of but also in an application where we can work together and make ourselves stronger as an organization is a great tool to have.â€

“I’m a competitor so I’m frustrated by the missed opportunities,” Cindric continued. “But for me, it’s a first step of establishing myself amongst those drivers. Obviously, speedway racing is a much different discipline than a lot of the other race tracks we go to. I definitely know I have a lot more to learn and I am excited for the next opportunity to drive the 33 car, wherever that track may be, and try to keep building that momentum moving forward.â€

Cup Series regulations allow for a handful of starts at the top level without sacrificing Rookie of the Year status. Cindric is expected to pilot the part-time No. 33 again at some point this season, but his next entry has yet to be determined. He hinted that he probably won’t return to the summer Daytona race in August or visit the other superspeedway at Talladega, as Cindric would like to get a taste of the different kinds of tracks the circuit has to offer.

“I want to get the experience and I think the intent on the team as well is to get me experience at intermediate, short tracks, and road courses,” he said. “As much as we can get done in the short schedule we have planned. That’s why I havenâ€™t said any race tracks because I donâ€™t want to commit to anything knowing that some of it is out of our control. That’s the intent.”

On the Xfinity front, Cindric began the defense of his 2020 title on a strong note, winning the season-opening Beef. It’s What’s For Dinner. 300 at Daytona. NASCAR’s national series now returns to the Daytona road course, where Cindric led 21 of 52 laps en route to victory the Xfinity circuit’s maiden voyage on the track. Cindric will start in the front row for the return trip on Saturday (5 p.m. ET, FS1) next to Brett Moffitt.