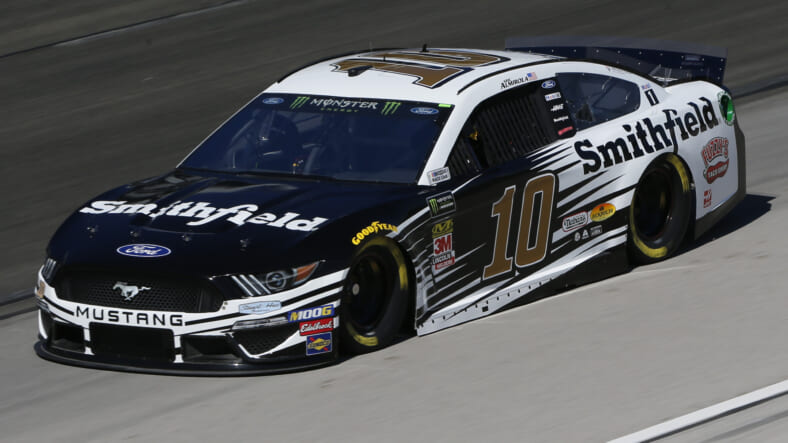 RETWEET to congratulate @Aric_Almirola on his WIN at @NHMS!

The third win of his career puts him in the @NASCAR Playoffs! pic.twitter.com/nXa5Y64kdZ

Faced with a win-or-go-home situation, Aric Almirola raced through chaos to clinch a spot in the 2021 NASCAR Cup Series playoffs on Sunday afternoon-into-evening at New Hampshire Motor Speedway.

Braving a wet racetrack, a weather delay of over 100 minutes, and oncoming darkness, Almirola took home the Foxwoods Resort Casino 301, his first win since the Talladega race in October 2018 (98 races ago) The race fell nine laps short of its 301-circuit distance, as rain and a New England sunset forced NASCAR to improvise.

Almirola, driver of the No. 10 Stewart-Haas Racing Ford, had struggled all season after enjoying a career-best campaign in 2020. He was mired in 27th-place in the Cup Series standings entering Sunday, posting only a pair of top ten finishes over the first 21 events of the year. With 232 points between him and Tyler Reddick, the 16th and final playoff driver, and only five races left on the regular season docket, Almirola was clearly in a must-win situation.

He took care of that and then some, leading the final 20 laps en route to this third career Cup Series race and his first on a non-superspeedway track.

Sunday’s race was defined by early controversy. The event went green under overcast skies in Loudon and rain began to fall shortly after. Polesitter and leader Kyle Busch wrecked on the slick racetrack on the sixth lap, as did Joe Gibbs Racing teammate Martin Truex Jr. Afterwards, the race sat through a 101-minute rain delay while the track dried. Busch’s No. 18 Toyota was deemed too damaged to carry on. The two-time champion was visibly agitated with NASCAR’s decision to start the race under the misty conditions.

The red flag has been displayed after multiple cars, including the leader @KyleBusch, are involved in a wreck due to a wet racing surface at @NHMS. pic.twitter.com/Tvom4PMvV0

"We're done. We're going home. It's over."@KyleBusch was leading when rain began to fall on the track, and crashed out of the race early at @NHMS. #NASCAR pic.twitter.com/pME9OYEwd3

Almirola’s fellow Fords took over after the race resumed, as the affair appeared to come down to Kevin Harvick or the Team Penske tandem of Brad Keselowski and Ryan Blaney. After the second stage, at lap 186, NASCAR announced that due to the setting sun and ensuing darkness, they would inform the drivers of a de facto 10-lap warning once conditions made a full finish impossible.

The No. 10 picked up speed over the final stage and led its first laps of the day with 55 to go, getting the best of Blaney in the last turn. Shortly after, the field was forced to come to pit road for the final service cycle of the day.

Another Ford, that of Matt DiBenedetto, tried to push his No. 21 Wood Brothers Racing machine to the 10-lap notice but had to stop 28 laps from the originally scheduled finish. The gambit capped off an emotional week for DiBenedetto, who was informed that he would not be returning to the No. 21 Ford next season. NASCAR Xfinity Series standout Harrison Burton will take over the ride while defending Xfinity champion Austin Cindric will take over the No. 2 currently occupied by Keselowski, who is expected to move to Roush Fenway Racing. WBR holds a technical alliance with Penske and has hosted DiBenedetto for the last two seasons.

Behind DiBenedetto, Almirola did battle with Keselowski, who was looking for the perfect Penske parting gift. The No. 10 finally got the best of him as visibility dwindled. NASCAR gave the 10-to-go notice with 19 scheduled laps left, effectively wiping away only nine circuits. Despite some interference from the lapped car of Austin Dillon, Almirola managed to secure the win, holding off the closing No. 20 Toyota of Christopher Bell.

Penske Fords, with Keselowski and Blaney sandwiching teammate Joey Logano, rounded out the top five. Logano’s day was defined by an incredible comeback story, as he recovered from a penalty during the red flag process before making up the time to finish fourth.

Dillon might’ve had every reason to hold Almirola up. With Almirola leapfrogging himself into the playoff bracket, the winless Dillon is now the odd man out. Dillon is now five points behind Richard Childress Racing teammate Reddick with four races left in the regular season.