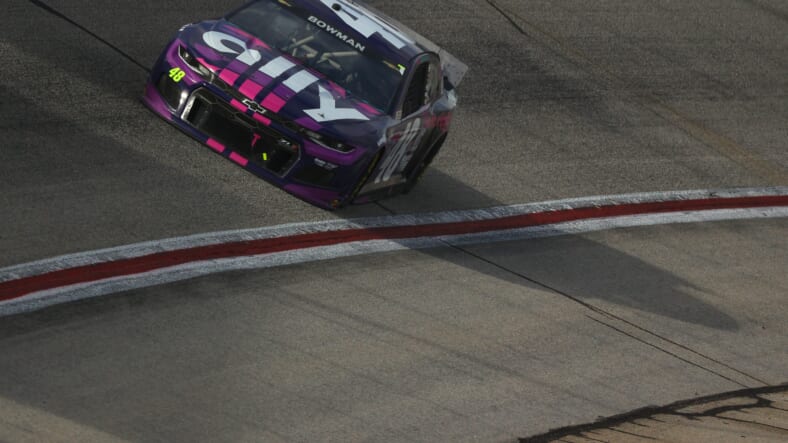 In a NASCAR race dominated by Joe Gibbs’ Toyotas, Bowman took the lead from Denny Hamlin with 10 to go to earn a win for the No. 48 team.

.@Alex_Bowman is on a mission!

A new driver may pilot the No. 48 Hendrick Motorsports Chevrolet, but its propensity for dramatic victories apparently remains.

Alex Bowman, driving the vehicle Jimmie Johnson took to seven NASCAR Cup Series championships, earned his first win in the iconic machine, passing Denny Hamlin with 10 laps to go to win the Toyota Owners 400 at Richmond Raceway on Sunday afternoon. Bowman began a final 12-lap stretch in third place before getting by Hamlin and Joey Logano to earn the victory, his first since taking over for Johnson. It was HMS’ first triumph at Richmond since Johnson won in September 2008.

Hamlin, who led a race-high 207 of 400 laps, finished second ahead of Logano, while Hamlin’s fellow JGR drivers Christopher Bell and Martin Truex Jr. rounded out the top five.

“It means a lot to get Ally a win, get the 48 back where it belongs,” Bowman said. “It’s been a rough start to the year, but Ally has been super committed…so cool to get them a win. It means the world to me. I’m appreciative for them to have faith in me.”

Bowman, 27, earned his third career Cup Series win, all coming at HMS. He burst onto the scene in 2016, taking over for an injured Dale Earnhardt Jr in the No. 88. He earned full-time honors when Earnhardt retired after the 2017 season and was called upon to succeed Johnson in the No. 48 when “Seven-Time” moved on. Ironically, Bowman’s victory came on the same weekend that Johnson made his IndyCar debut, finishing 19th in the Honda Indy Grand Prix of Alabama.

Despite dominance from the Gibbs Toyotas of Hamlin and Truex…combining to lead 308 of 400 laps…Bowman’s car lingered in the top ten for most of the day. Logano took over after Truex’s No. 19 for speeding at lap 294. As Hamlin and Logano waged war for the lead, Bowman’s opportunity came when Kevin Harvick lost his right-side tires and wrecked with 18 to go. The No. 48 emerged third after the lead lap cars came to pit road.

Bowman was able to beat Hamlin into the corner and take the lead with 10 laps to go in the dozen-lap shootout. The driver was shocked he was able to open and keep such a large lead; he mentioned that the No. 48 was not a good short-run car prior to that last stretch.

“When we drove away I was like, oh my gosh, what’s happening!” Bowman said with a smile. “I was super loose on the last couple of laps and did my best to get it back…we did a lot to improve the racecar and have it take off.”

Either way, Bowman became the eighth different winner in nine races this season. Two of Bowman’s Hendrick teammates…William Byron and Kyle Larson…are also among the winners, while Chase Elliott is the defending Cup Series champion.

The Richmond endeavor turned out to be another tough break for Hamlin, who has now earned top fives in all but one of the first nine races…though none have ended in victory lane. He continues to lead the NASCAR Cup Series points standings with a sizable 81-point lead of Truex, the only repeat winner so far this season.

“It’s a double-edged sword,” Hamlin said of his 2021 season. “You’re upset in the moment. You feel you should capitalize when you have great cars…but we’re running very strong. It’s mixed emotions.”

The unpredictability of the 2021 season will likely be raised even further next weekend, when the NASCAR Cup Series descends upon Talladega Superspeedway for the GEICO 500 on Sunday (2 p.m. ET, Fox).