NASCAR: Alex Bowman reflects while waiting on the playoff fringe in Texas 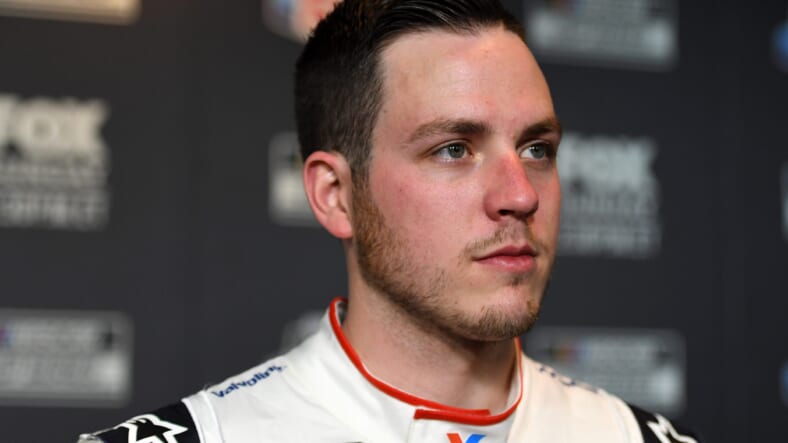 Even if his NASCAR playoff journey ends in the Round of 8, Alex Bowman is one of the year’s biggest winners through a powerful evolution.

With the Autotrader EchoPark Automotive 500 trapped in rain-induced purgatory at Texas Motor Speedway, the stars of the NASCAR Cup Series have sought ways to entertain themselves as precipitation, mists, and chilly weather rocks the Lone Star State. Bubba Wallace and Ryan Blaney are engaging in virtual sparring on the links of their PlayStations. Joey Logano, locked into the group of four drivers eligible for a champion win in Phoenix in two-and-a-half weeks, told reporters that he was so racked with bored that he considered calling TMS president Eddie Gossage to ask if he could drive one of the massive trucks tasked with trying the track.

Alex Bowman, on the other hand, is working on his cars. Tampering with his No. 88 Hendrick Motorsports Chevrolet during the weather delays is forbidden, but Bowman has instead spent his time ordering parts for a sprint car endeavor he showcased on Twitter last week. The vehicle bears the marks of Valvoline, one of his primary Cup Series sponsors, and was tested by up-and-coming sprint car star C.J. Leary at The Dirt Track on the campus of Charlotte Motor Speedway.

It’s certainly one way to keep Bowman occupied. The driver mentioned to the NASCAR media gather via Zoom that he was out of clean clothes in his motorhome and had In-and-Out Burger and pizza for lunch (though he offset the meal with a visit to the track’s gym, located below The Speedway Club suites.

It was another form of boredom, the kind induced by the ongoing health crisis, that inspired Bowman to take on such a challenge. His team is in the early stages of such a process, but he proudly spoke of the new purpose in a media session brought upon by the continuing rains in Fort Worth.

“Itâ€™s been a lot of fun,” Bowman said of the project. We went and tested on Friday and C.J. was really fast right off the bat, as fast as anybody thatâ€™s tested during the day there. We were going pretty good.

“I think (he) ran like 7-8 laps and had a ton of fun. Weâ€™re going to start racing it here soon and have lot of fun doing it. Thatâ€™s why I do that deal: to really just have fun and no expectations. I have a really, really good group of people that help me on those cars. Weâ€™ve never lost a party when we go dirt racing, so thatâ€™s what weâ€™re going to go do this winter.â€

Adding the title of team owner would be a stellar way for Bowman cap off the 2020 refurbishment of his racing resume. The 27-year-old is currently one of eight drivers left in contention for the NASCAR Cup Series title as the 500-mile event in Texas sits in a wet holding pattern. His No. 88 team entered the race 27 points behind Brad Keselowski for the final spot in the championship four and seemed poised to at least partially whittle that margin before the skies opened on Sunday.

The Chevrolet started fifth but took the lead on lap 29 when polesitter and points lead Kevin Harvick got into the wall. It was a lead he would keep for the next 17 laps until the first precipitation brought out the caution flag. With pit strategies featuring both two-tire stops and ignoring a service visit entirely, Bowman has been scored in the 18th position since Sunday late afternoon, when the race was temporarily shut down on lap 52 of 334. The third attempt as resumption will come on Wednesday afternoon (3 p.m. ET, NBCSN).

Bowman is confident his team can continue to run upfront with the leaders as the season dwindles down. He will clinch a spot in the championship competition with a win, though one more opportunity will come next week at Martinsville Speedway. The championship race will be held at Phoenix Raceway on November 8. It’s the first time the Phoenix, a two-hour drive from Bowman’s birthplace in Tuscon, hosts the season finale.

“I was so happy with the race car. I was nervous going in, just because this is a place weâ€™ve really struggled at in the past,” he said. “Weâ€™ve really only had one really strong race here. Was really just looking forward to getting here and seeing how the car was going to be, and it was just really good off the bat. So, that gives me a lot of confidence.”

The 17 laps Bowman led on Sunday was more than he led in ten prior visits to For Worth. His “one really strong race” was a fifth-place finish in this very event last fall.

Even if Bowman misses out on the championship battle, his entry into the Round of 8 has been the furthest postseason trek of his career. This trying season has also seen him set a new career-best in top-ten finishes (13) and post the most dominant effort of his racing career. Back in March, Bowman led 110 of 200 laps to earn his second career victory at the Auto Club 400 in Fontana, CA. Earlier this month, it was announced that Bowman would be the long-sought successor to seven-time champion Jimmie Johnson in the Hendrick team’s No. 48 Chevrolet.

Bowman still thinks that, despite the accomplishments, there’s room for improvement over his final three races in the No. 88 branding.

â€œRight now, I think weâ€™re running great. The last two months or so have been really, really good for us,” he noted. “The summer was really rough and the beginning of the year was amazing. So, weâ€™ve definitely had our fair share of ups and downs. But I would give our team a B+ or A-, just based on how well theyâ€™ve worked together.”

Bowman was as high as second in the standings (sitting in the runner-up spot after NASCAR’s return from the COVID-19 pause at Darlington Raceway in May), but went a tough summer (three top-tens over the next 13 races) shifted him to the middle of the pack. But the team has refound their swagger during the postseason, finishing no worse than 16th in the last seven completed events.

The fact that Bowman is even in this position in the first place is one of the more inspiring chapters in recent NASCAR history. A champion on the midget car circuit, Bowman got his first taste of major NASCAR racing in 2012, when he made his debut on the Nationwide (now Xfinity) Series circuit. He would run a full-season the year after, taking over the No. 99 Toyota for middle-tier RAB Racing. Bowman brought the car home 11th in the standings and became the first (and only) RAB driver to post multiple top-five finishes. That finish was made somewhat more impressive by the fact that Bowman was released from RAB when his sponsor pulled out of its duties prior to the 2013 season finale at Homestead-Miami Speedway.

After that successful campaign, Bowman felt he needed more experienced at the lower levels before advancing to the Cup Series. Several teams did come calling, but a tough financial bind forced him to cut back on his Nationwide efforts. He thus accepted a ride for BK Racing’s No. 23 Toyota, a microbudget team where merely finished the race was just as valuable as a win.

“A lot of teams called and only one didnâ€™t ask for money. And I didnâ€™t have any money,” Bowman said. “Thatâ€™s where I ended up and it was (either) do that or sit on a couch. There wasnâ€™t an opportunity to return to the Xfinity ride that I had in 2013. I feel like we really did a lot with a little in 2013 and outperformed where we should have been and did a really good job. We had a really good group of people and outperformed what we had financially.â€

Bowman ran a full season at BK, finishing no better than 13th. He would then move on to another small team, driving a No. 7 Chevrolet for former Cup Series crew chief Tommy Baldwin. He’d mostly run at the back of the field, but he started to garner attention from NASCAR’s elite.

“I was pretty down early in the season and Jimmie Johnson was the first guy to come and talk to me,” Bowman said. “(He’d) just be like â€˜man, youâ€™re doing a really good job with that carâ€™, just out of nowhere. I still have no clue why he did that. I talked to him about it a couple weeks ago and he was like â€˜man, I just came up to lap you and you were completely sideways, driving the wheels off of it, and I felt like I needed to say something and tell you that you were doing a good jobâ€™. He was really supportive.â€

The support of Johnson, as well as fellow former Cup champion Kurt Busch, wasn’t the only thing keeping Bowman going during early growing pains. A fight to survive, not even only for the sake of his racing career, was the strongest factor.

That job became even more arduous when he and Baldwin parting ways, leaving him without stable racing ground. But his performance caught the eye of none other than Dale Earnhardt Jr. The face of NASCAR would bring Bowman in to represent his Xfinity unit at his JR Motorsports team for nine races, seven of which ended with his No. 88 Chevrolet in the top ten.

Those numerals once again proved to be foreshadowing. When Earnhardt was forced to miss the latter stages of the 2016 Cup season due to injury, Bowman teamed up with Jeff Gordon to drive his Hendrick Cup for the remainder of the season. In his retirement speech the following spring, Earnhardt hand-picked Bowman to replace him in the Hendrick stables. Team owner Rick Hendrick acquiesced, naming Bowman the replacement two months later. He has since become one of the more consistent drivers on the circuit, reaching the playoffs in each of his three full-time seasons with HMS.

“A crazy set of circumstances to go from (the No. 23) to driving the No. 48 for Hendrick Motorsports,” Bowman admitted. “Driving for Tommy Baldwin the following year, that deal falling apart, then, driving the simulator and getting called to fill in for Dale, it was a pretty wild couple of years there and definitely a lot of very uncertain times and stressful times.”

Stability was supposed to come at Hendrick, thought 2020, his contract season, has proven to be one of the most unusual seasons in NASCAR history. But in the midst of unprecedented times, Bowman has made his own luck and has emerged from this trying campaign as one of its brightest silver linings.

Bowman may be bored as NASCAR continues to wait out the weather in Texas. But if a little boredom is the price of stability, a strong team unit, good health, and a chance to race at a championship, it’s safe to say that Bowman, a driver who hasn’t been handed a single thing in his NASCAR career, will run that race every single time.

Surviving at the Cup Series level used to mean racing cars to the finish on a wing and a prayer. Now, it’s a steady diet of In-and-Out Burgers and pizza.