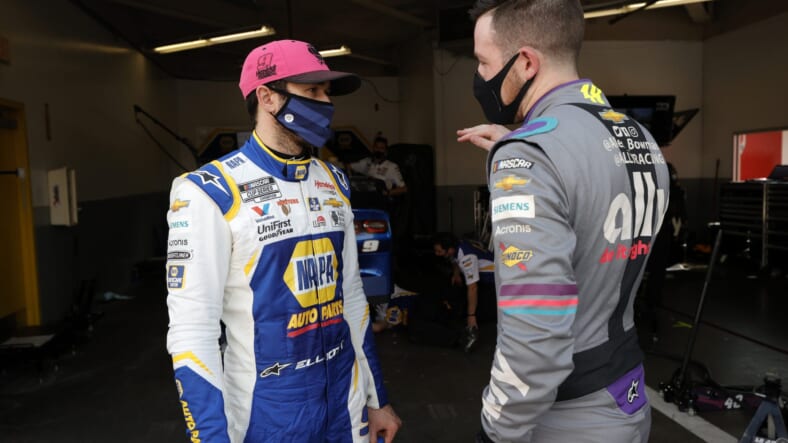 Bowman will sit on the pole for NASCAR’s season-opening event. He will line up next to Hendrick Motorsports teammate William Byron.

WHAT. A. LAP. Retweet to congratulate @Alex_Bowman on his #DAYTONA500 pole! pic.twitter.com/Ym7dHINJ0Y

In NASCAR, some things never change. Jimmie Johnson has retired and Jeff Gordon will be in the media booth, but their respective vehicles will nonetheless pace the field at the Daytona 500.

Alex Bowman christened his new number with a run of 47.056 around the iconic 2.5-mile oval on Wednesday night, earning the pole for Sunday’s Great American Race (2:30 p.m. ET, Fox). It will mark Bowman’s first race in the No. 48 Chevrolet after the retirement of its seven-time Cup Series champion Johnson. William Byron (47.314) will be right beside him in the No. 24 previously occupied by Gordon.

Qualifying for the Daytona 500 consists of two different stages. Single-car qualifying, where each car runs a single timed lap, settles only the front row, while the rest of the field is determined through qualifying races known as the Bluegreen Vacations Duels on Thursday (7 p.m. ET, FS1).

Bowman, 27, earns his fourth consecutive front row start in the 500, also winning the pole for the 2018 event while driving Hendrick No. 88. He also started in the front row next to then-pole sitter Byron in the year after. Alas for Bowman, coming off a career-best sixth-place finish in last year’s standings, no pole-sitter has won the 500 since Dale Jarrett did so in 2000 for Robert Yates Racing.

Byron will return to Daytona’s oval for the first time since earning his first Cup Series win at the regular season finale in August, a win that clinched him a spot in the NASCAR playoffs. The No. 24 rounded out the top five in Tuesday’s Busch Clash exhibition held on Daytona’s road course.

In addition to Hendrick Motorsports, Wednesday night proved to be a big one for both Ryan Preece (8th, 47.585) and David Ragan (13th, 47.730). Those two drivers were the fastest non-chartered drivers, guaranteeing them a spot in the main event on Sunday. Preece drives the No. 37 Chevrolet for JTG Daugherty Racing, while Ragan, who won Daytona’s 400-mile summer event in 2011, will pilot a part-time car for Front Row Motorsports. All other non-chartered drivers will have to race their way in through their respective Duel races. Among the contenders are defending Xfinity Series champion Austin Cindric (driving a part-time car for Team Penske before making his full-time Cup debut next season) and his competitor at the de facto AAA-level Noah Gragson.

Wednesday’s qualifying saw 42 cars partake. Gragson’s No. 62 Beard Motorsports Chevrolet was barred after failing inspection while Derrike Cope had battery issues with his No. 15 Rick Ware Racing Chevrolet. Cope, the 1990 Daytona 500 winner, is locked into Sunday’s race through an RWR charter, will be making his first Cup Series start since 2018.