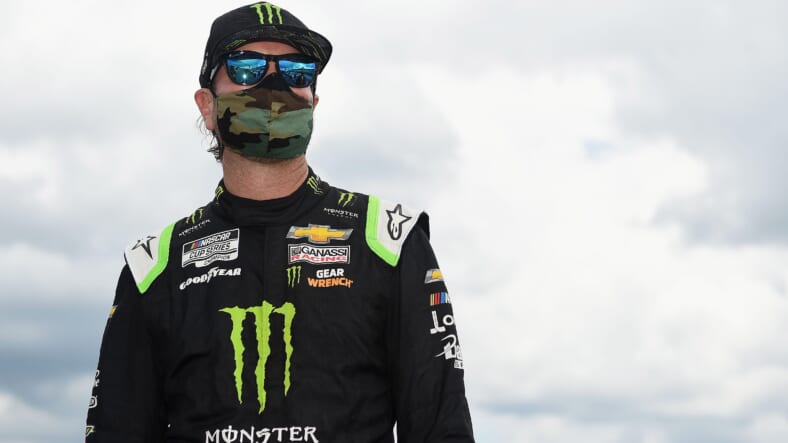 Set to race a NASCAR Cup Series vehicle for the 700th time on Sunday, Kurt Busch looks forward to a continued impact on the sport.

New NASCAR fans seeking a primer on the circuit’s history could do far worse than simply studying the career of Kurt Busch.

Driver of the No. 1 Chip Ganassi Racing Chevrolet, Busch is set to make his 700th start in the premier Cup Series at the Big Machine Hand Sanitizer 400 Powered by Big Machine Records on Sunday (4 p.m. ET, NBC). Not only is Busch only the 16th driver to reach that precipice, but he’s gone through an auto racing roller-coaster that entire race teams may never experience.

Asked about the upcoming landmark start in a Wednesday conference call, Busch waxed nostalgic, thinking back to his father Thomas racing on the local tracks that began the racing journey that continues to this day.

“To have this opportunity and to have been blessed to have raced with so many great race teams over the years, just making it past the local track was something that I thought was an achievement because my dad was a local racer. He won a lot. But it was like money, sponsors, and the whole challenge of even getting to like the Southwest Tour and Late Model division, that was even tough for us way back in the past. So, itâ€™s amazing. Twenty years of racing at the top series level and now having 700 starts, I never would have guessed.â€

In Busch’s defense, few truly could’ve projected where this trek would take him.

Busch, 41, has been full-time racing in 2001. He’s one of only four active Cup drivers to have partaken in a race alongside the late Dale Earnhardt. Much like The Intimidator, Busch developed a bit of an antagonistic role and engaged in conflict with several other drivers, including one with his future teammate and team owner Tony Stewart during an event at Richmond in 2013. That came six years after Busch and his younger brother Kyle briefly stopped speaking after an incident at the 2007 NEXTEL All-Star Challenge in Charlotte, a feud that ended only weeks after the season when their grandmother intervened before Thanksgiving dinner.

His career has been a roller-coaster, one that has experienced the valleys of not just his confrontations, but a 2005 DUI and domestic violence allegations a decade later (charges were never filed). All in all, the “controversies” section on his Wikipedia page is over seven bullets long. On the track, Busch took home the 2004 Cup Series title (the first under a playoff format) but by 2012, his antics and inconsistency relegated him to low-budget exploits.

The time-honored, cutthroat auto racing concept of “rubbin’s racin'” and championship competition was well-personified by Busch. In addition to his historic championship, Busch has earned 31 Cup victories, including crown jewel triumphs in the 2010 Coca-Cola 600 and the Daytona 500 seven years later (in which hed led only the final lap). He’s even made a mark beyond NASCAR, winning 2003’s International Race of Champions title (beating out names like Mark Martin, Jimmie Johnson, and Helio Castroneves) and he even partook in Indianapolis Motor Speedway’s more renowned event, the Indy 500, in 2014. He finished that race sixth before running the Coca-Cola 600 that night. To date, Busch is the last driver to attempt to run both the IndyCar and NASCAR events on Memorial Day weekend.

Busch had made no indications he wants to hang up his helmet any time soon. In fact, with NASCAR sharing IMS with the IndyCar circuit this weekend, he hinted that his future exploits may not just include his No. 1 Chevy. He was even considering running in the latter’s event on Saturday, but current events made that difficult.

“I looked at it and just with everything going on with COVID and the pandemic and lack of preparation, it just kind of shut everything down as far as the progress and the approach, because it takes a full effort of being tested and track time and being ready,” Busch remarked. “Thatâ€™s something that I really put in when I ran the Indy 500 six years ago now. And so, everything just got shut down. But, it would have been fun to with Chip Ganassi Racing.â€

Redemption soon awaited the Las Vegas native, as strong performances in the fledgling Phoenix Racing and Furniture Row Racing machines showed the racing world he still had plenty left in the tank (literally and figuratively). Four years before Martin Truex Jr. had the wheel in a title run, Busch guided FRR’s No. 78 car to its first playoff berth. It caught the eye of Stewart’s ownership partner Gene Haas, who made him the original driver of the No. 41 in their Stewart-Haas Racing stable. He would miss the first three races of his sophomore drive with Stewart due to the aforementioned allegations but won his sixth race back.

Busch joined Gannasi after five years in the No. 41 and went to Gannasi’s No. 1 for what, appropriately, was set to be a final season. But a strong showing punctuated by a thrilling victory in which he held off Kyle by 0.076 seconds at Kentucky Speedway convinced Busch to sign on for at least two more seasons.

Now, Busch’s career is defined by consistency, not controversy. He’s firmly entrenched in the NASCAR playoff picture in 10th, and only Kevin Harvick, Brad Keselowski, and Denny Hamlin have earned more top ten finishes (9). Over the past dozen races, Busch has finished no worse than 18th, a fact he has attributed to a strong behind him. His return has also afforded him a return to action alongside Matt Kenseth. Nearly two decades after the pair won back-to-back titles under Jack Roush’s supervision, they reunited in the Gannasi stalls when Kenseth was called to drive the No. 42 Chevrolet mid-season.

“It takes a good team to have a driverâ€™s ability to find the success. A team is the foundation,” Busch said of his longevity. “Iâ€™m having some of the best years of my career as far as consistency because Iâ€™m using that experience level. Iâ€™m using that calmness and that ability to project the future in the car, and thatâ€™s leading to good, consistent, and quality finishes. Itâ€™s just that weâ€™ve got to cross over another barrier of sometimes you just throw caution to the wind and let it rip.”

Busch noted that he was part of a NASCAR revolution, one that began to rely on younger drivers. He himself ran his first race when he was 22, called upon to drive the No. 97 Ford for Roush. It was in that car where Busch won his first races and his monumental title, as well as where he saw Kyle enter the series at 18 in the early stages of that championship campaign.

Those days of youth may be long behind Busch, but he’s grateful that such a revolution has taken him on this lengthy NASCAR ride…one that shows little signs of stopping.

“The change, the shift, has happened for younger drivers to get in, and yet itâ€™s still tough to go past 25 years is extreme. I donâ€™t think weâ€™ll ever see that anymore,” Busch remarked. “So thatâ€™s that window that weâ€™ve all had this opportunity to race in, and I think itâ€™s just a matter of age blended with the experience level and with a top-tier team. And when you see that, itâ€™s usually in that 32 to 38 range that I would say could be the peak.”